Will Young is Season 24 Champion

BCPC A victorious in Champions League clash against Nuts 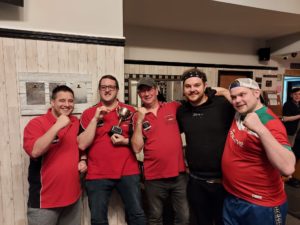 After a long wait, the BCPC finally has the Champions League Challenge Trophy back in our possession following a great day out in Shropshire on April 30th. It was a hard-fought game contested by 6 teams of 5 players, 3 from the BCPC and 3 from Nuts Poker. Points began once we were down to 18 players and at that stage, all 6 teams had lost 2 players, with only Matt Kay knocking out one of his own team, as a move designed to try and chip MARK ENGLAND up went badly wrong! By now, the alcohol had kicked in and TREV GREENWAY went to work, absolutely smashing his table with a fast and loose approach as he eliminated 3 nuts players as we went down to 14. He then added Matt Kay and Brian Yates to that list to equal the record of 6 eliminations in a single game, before adding two more Nuts players as we went down to 6-handed. With 2 players each from the BCPC “A” & “C” teams, plus the NUTS “B”, it was anyone’s game but Lee Mason then eliminated Hedd Williams in 6th and Marie Jackson in 5th to become a major factor in the game as Trev’s stack began to dwindle. Lee then took short stacked teammate NATE POULTON out in 4th and guaranteed at least 2nd place. It was now so tight…and everything rested on who out of Lee and Trev could finish highest and when saw off Lee finally Trev(£50), the trophy was the property of the BCPC “A” team, with Lee’s magnificent Final Table showing in taking out 4 players in a row proving crucial. Unfortunately, Lee(£100) couldn’t quite go onto win the game as Oscar Marek (£150) from Nuts “B” beat him Heads-Up, but the important work had already been done. Trev ended up with 8 eliminations, which is a new single-game record while Brian Yates’s 3 eliminations gives him 9 in total for another new record. The next Champions League game could yet be against a new opponent, as Sutton Poker have thrown down the challenge so we will update you on that one later on in the year.