Right, after a holiday to Tenerife apologies for a late blog, but better later than never hey?!

We were back again for game 2 of season 22 and another 26 players would lock horns to grab points towards that coveted title.  Matt Godwin had made a cracking start in Week 1, could he continue in to week 2?  We were about to find out!

After asking in the Whatsapp group for hand submits I got the usual response, hand pics so they ain’t going in, oh no not this time!

It would be a slow start in terms of blog worthy hands, so much so we would wait until 8.20.  Pickering the shorty shoving pre with K/Q and he would finds a call in Laura holding pocket Queens.  A king would be nice, it wasn’t to be however and Liam would exit us first in 26th.

Healey had adopted a tight game strategy, a bit like his shirt, ooo matron! 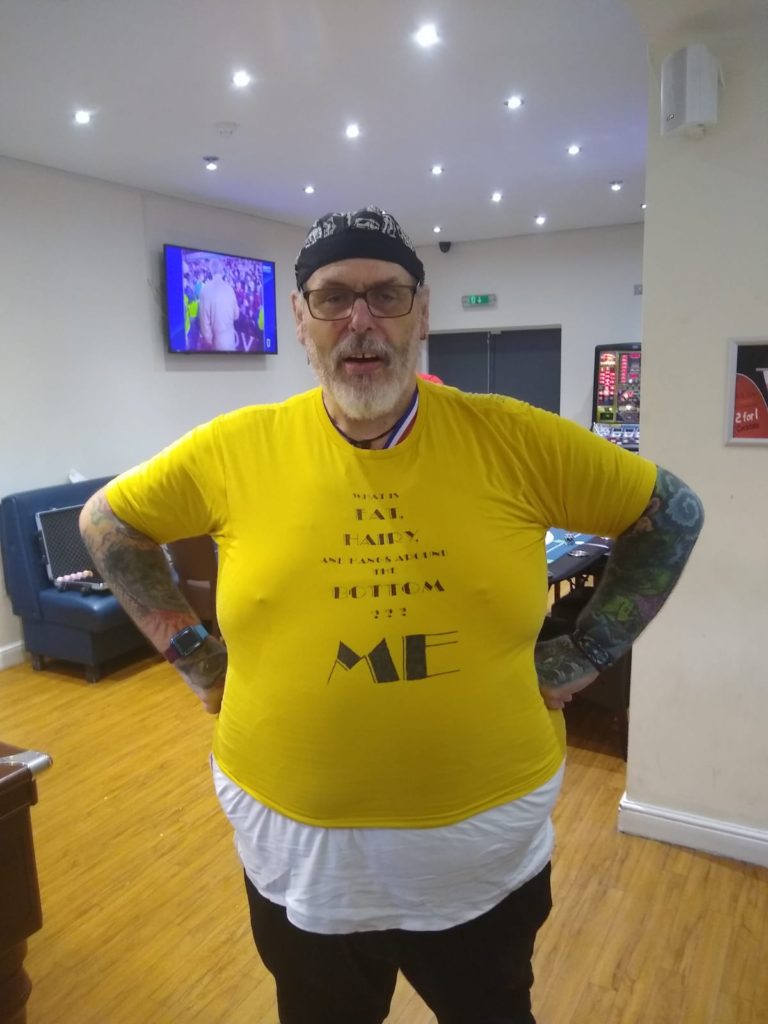 Mooch had made a nice start to game 2; accumulating a nice quantity of chips from current BCPC champion Nye Venables.  Mooch bet all streets bar the turn, a scary 7 as the board pairs but his flush was enough. 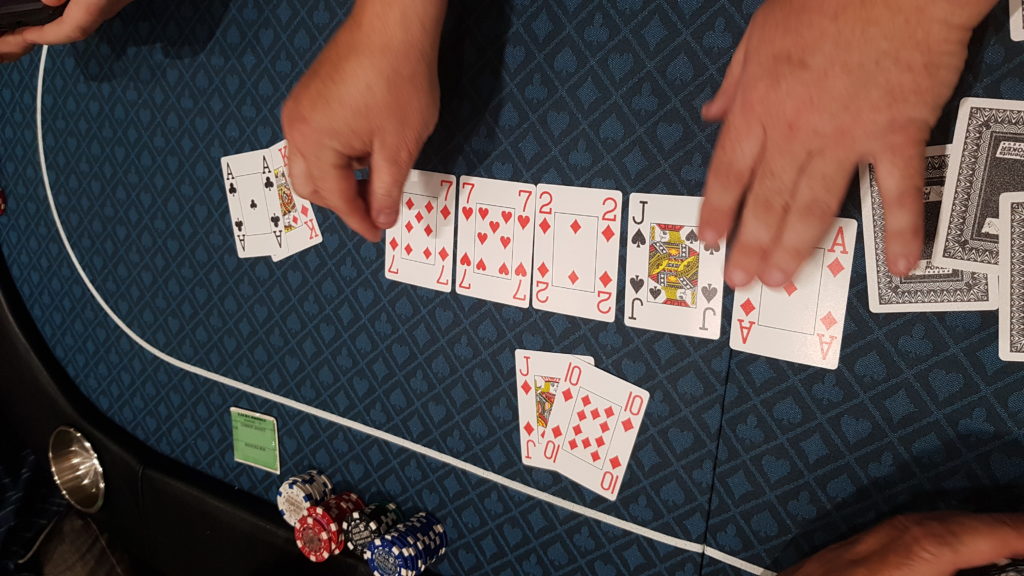 Massive pot preflop this time it’s Nic, Nye and Kev involved;  Nye managing to take it at showdown with a full house beating the straight.  Kev managed out get away on the turn, phew! 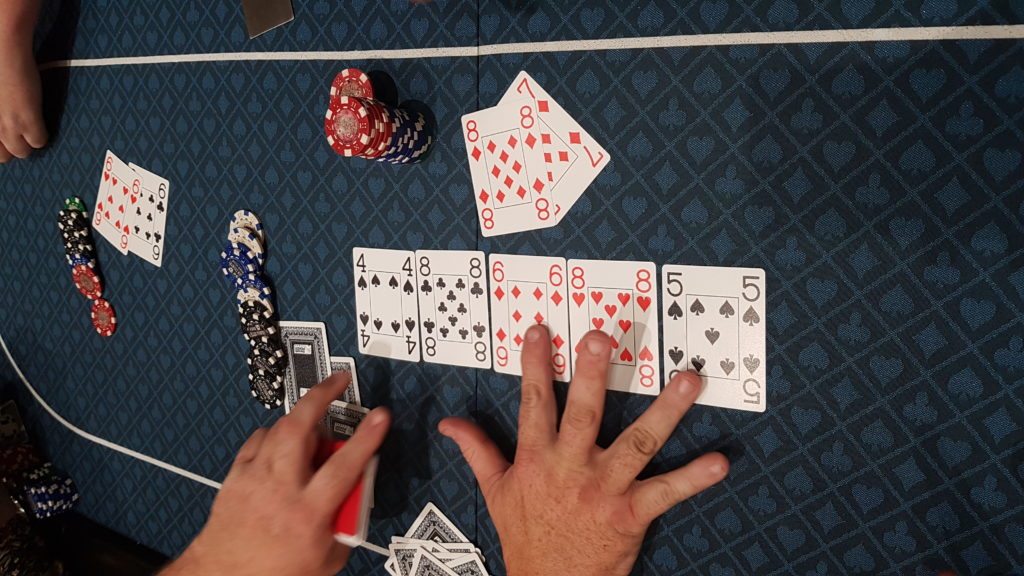 Nic Cross had found himself the shorty and shoves for 450.  Cromwell reraises to 1200 isolating which sees Nic’s A/K up against Cromwell’s 7’s in a coin flip.  7’s hold and Nic is gone in 24th. 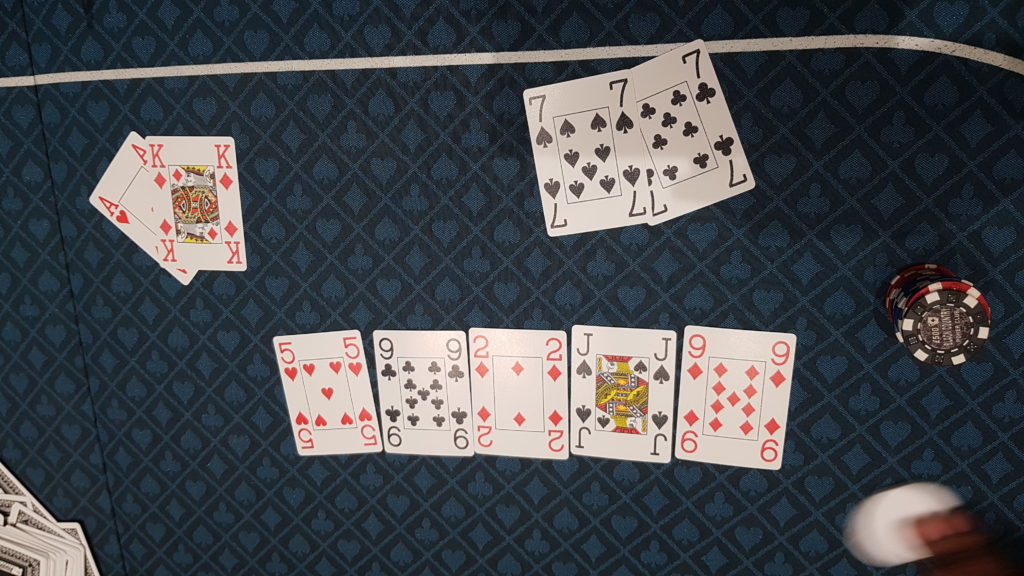 Cromwell “What the fuck’s a postillan?”

All “A bottom card protector”

Cromwell “Oh! You learn something everyday!”

Cromwell yet again in the action as Mooch raises to 500.  Cromwell reraises to 900 as Mooch calls then checks flop.  Cromwell bets 700 and Mooch reraises.  Cromwell shoves and Mooch calls.   Mooch would be left a shorty after tha hand played out, his pocket 6’s vs Cromwell cowboys. 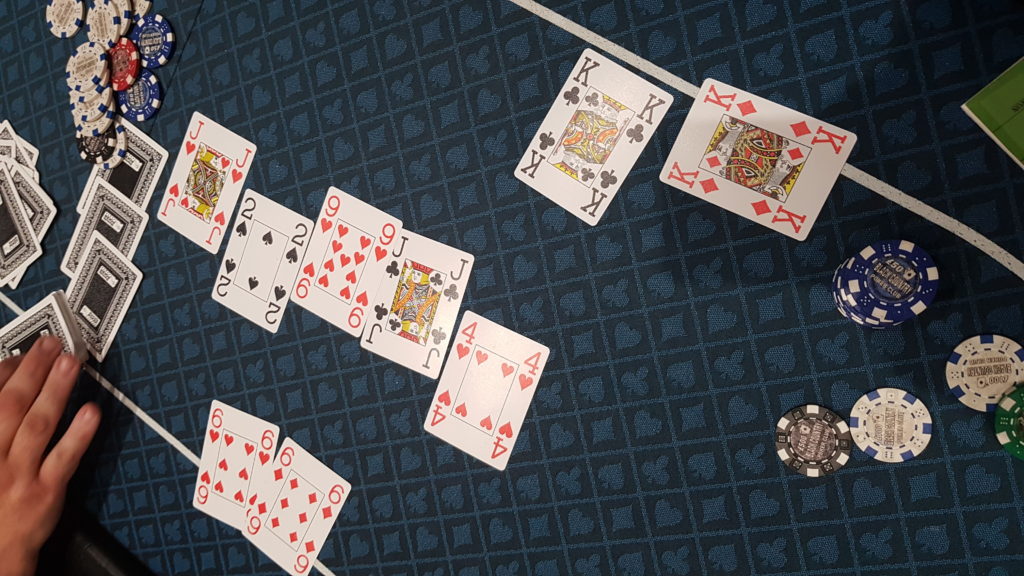 On another table for a change, Tony Trippier was happily bluffing the river and Matt Kay as Tod called it “folds king like a pussy” LOL 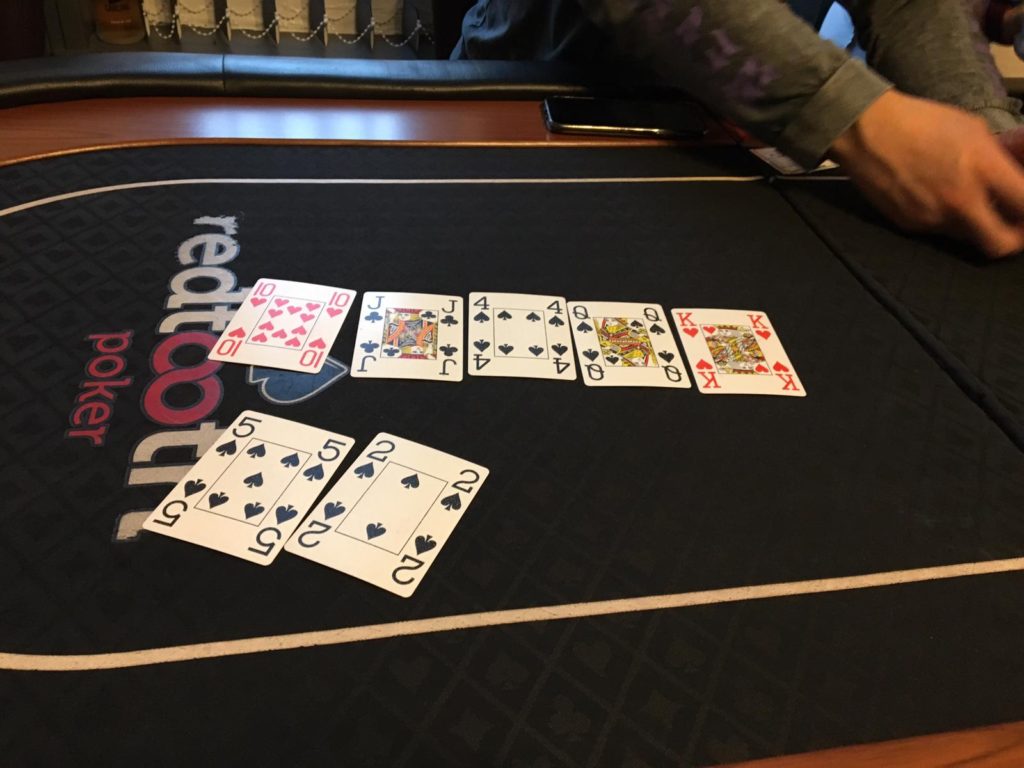 OOO it’s a biggie! 3 way all in! Kev with Queens;  Tony shoves with KJ whilst Kev reshoves and Mooch putting his tournament life on the line also as short stack.

What a board if it weren’t already all in, Tony flopped the King, whilst Kev picked up a set of Queens, it was Mooch however that hit the nut flush and lived to survive another hand! 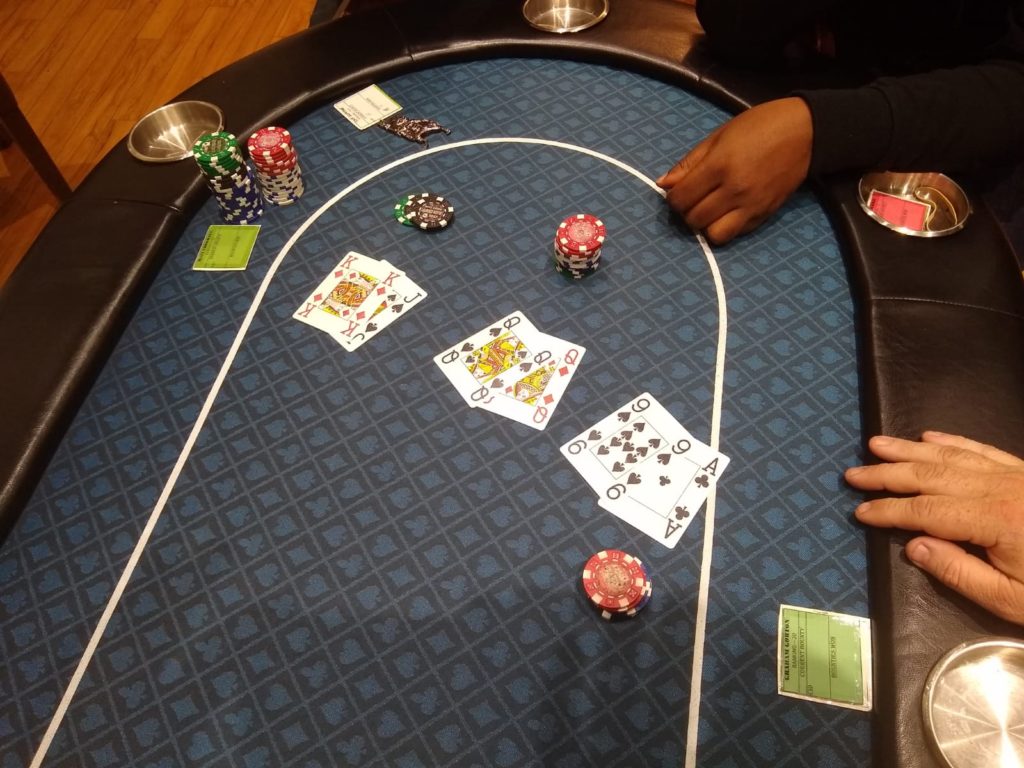 Ricky would shove AK which was called by Rawling’s KJ.  Ricky looked in great shape as 3:1 favourite, but a Jack would see Buckland exit in 22nd.

Great ups and downs are part and parcel of the game and for Graham it was no exception after his triple up 10 minutes prior.  Mooch this time would see himself all in pre with K/10ss.  He was called by Kev and the Queen would seal Mooch’s fate in 21st.

May the cards be with you!  Unfortunately not for Mason in this particular hand as his AQdd was unluckily cracked by Phelan’s A/9hc Phelan hitting a flush on the river, ouch Lee!

Kev takes a massive pot from H as H is all in on the river.  Kev instacalls with the set!

And this games BCPC Oscar slowroll award goes to Bri with the pocket rockets preflop and a full house to boot! NH Sir!

Cromwell would put his tournament life on the line, all in pre with pocket Jacks finding a call from Phelan.  The Jacks hold and a double up ensued. 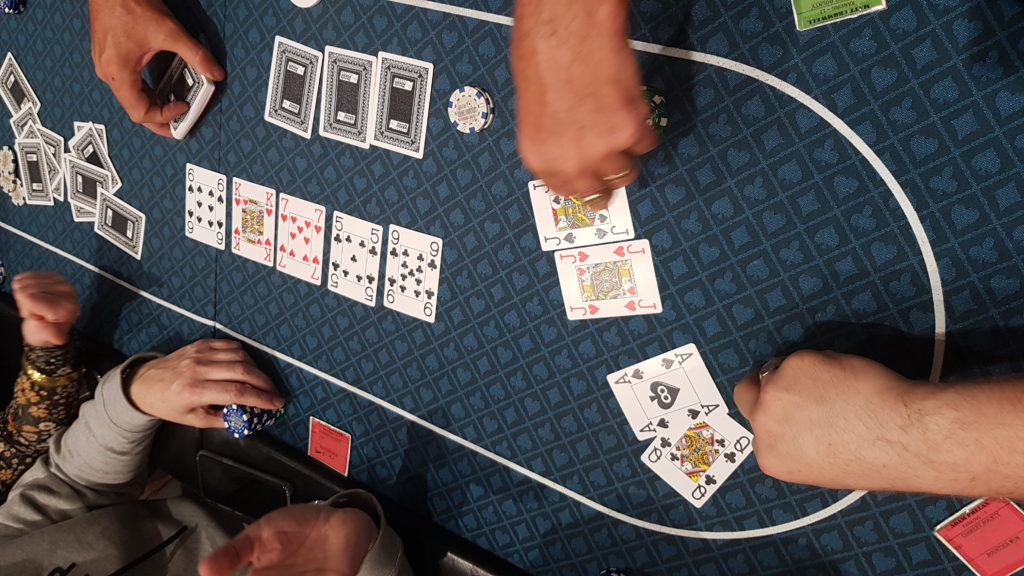 Nic Cross was busy losing his J10 bottle opener, we haven’t got it, honest! 🙂 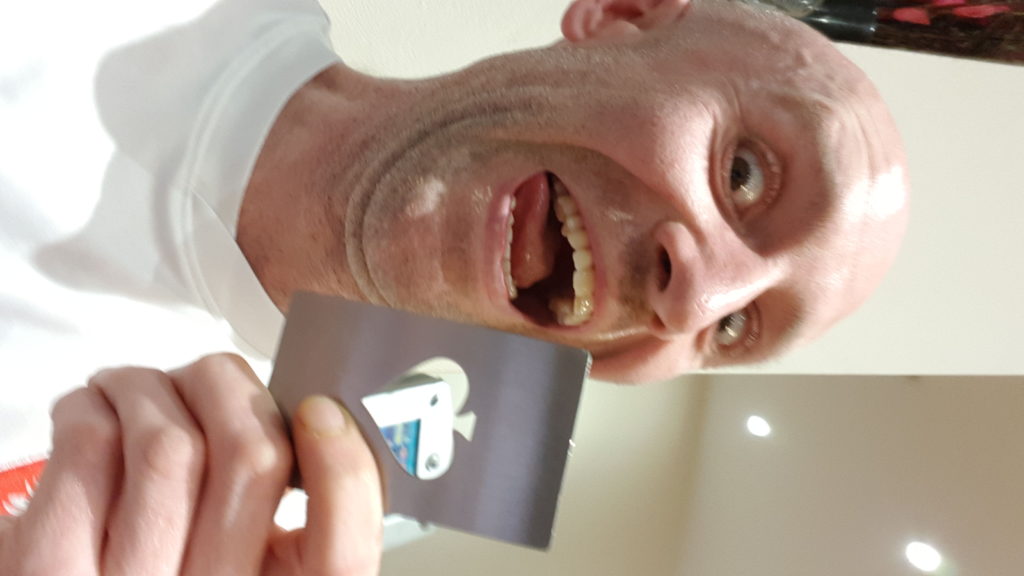 Phelan would be all in with pocket 4’s and got a call in McKinley with A/10.  2 Pair on the board however counterfeits Phelan’s 4’s and Matt’s Ace carries.  Unlucky Adam! 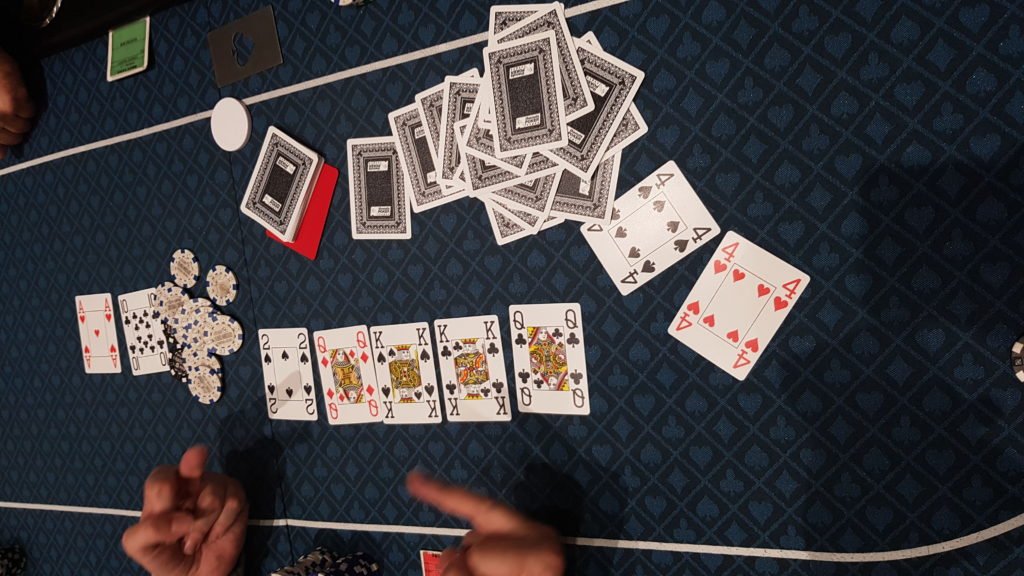 Cromwell was yet again a short stack and putting his tournament life on the line.  All in with Ace Queen and called by Nye’s Queen/9  A straight was flopped for both, but Cromwell had the better of it and doubled up

Nye loses another race, this time against Bri 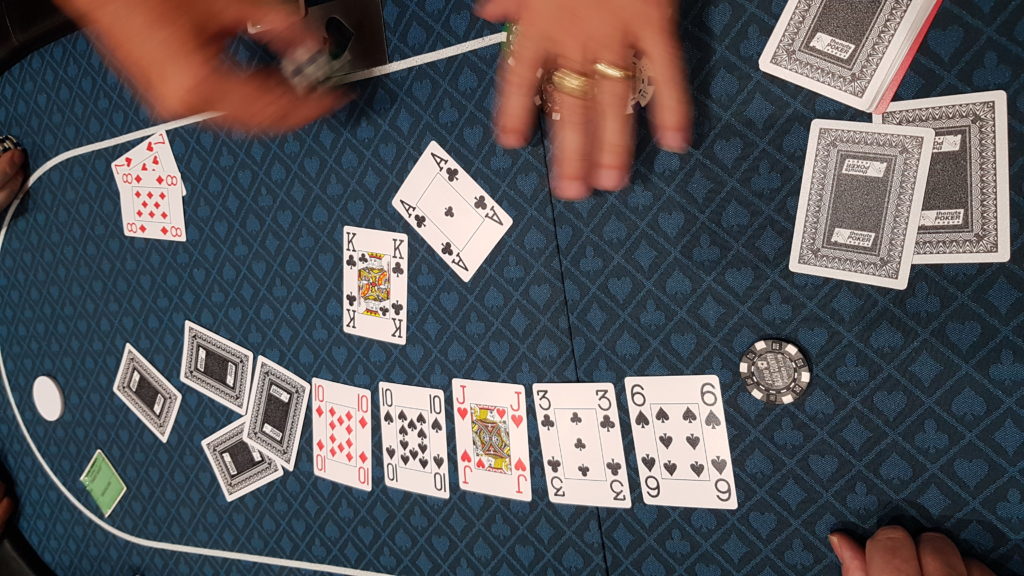 It would now be Nye’s turn to possibly face the exit.   He gets it in with 8/J and called by Kev with 6/7hh  A 7 on the river for Kev would see Nye exit in 14th.  Not long after we would see Dan Ryder and Matt Godwin leave us in 13th and 12th respectively.

Was the Cromwell revival on?  He gets it in as underdog against TT with Q/J and finds the call with Tony’s A/K  A cracking flop would see 2 pair for Cromwell, a scary ace on the turn giving more outs but he holds on.  Unlucky Tony!

Tony and 11th are starting to become a bit of a habit and it would be his finishing position again as Cromwell gets him out with k/7 vs his J/9 from the big blind.

We interrupt this broadcast for some happy BCPC faces 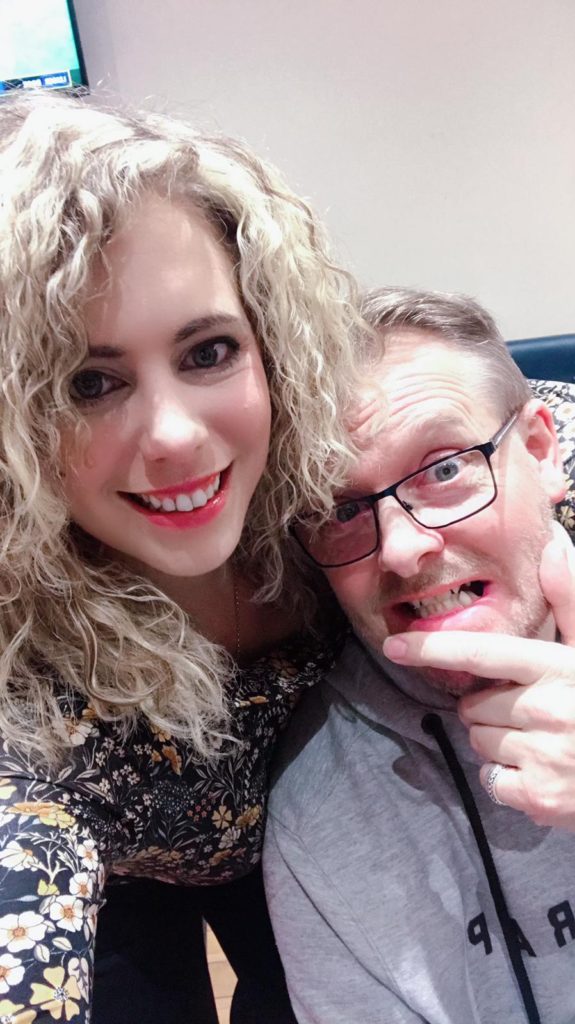 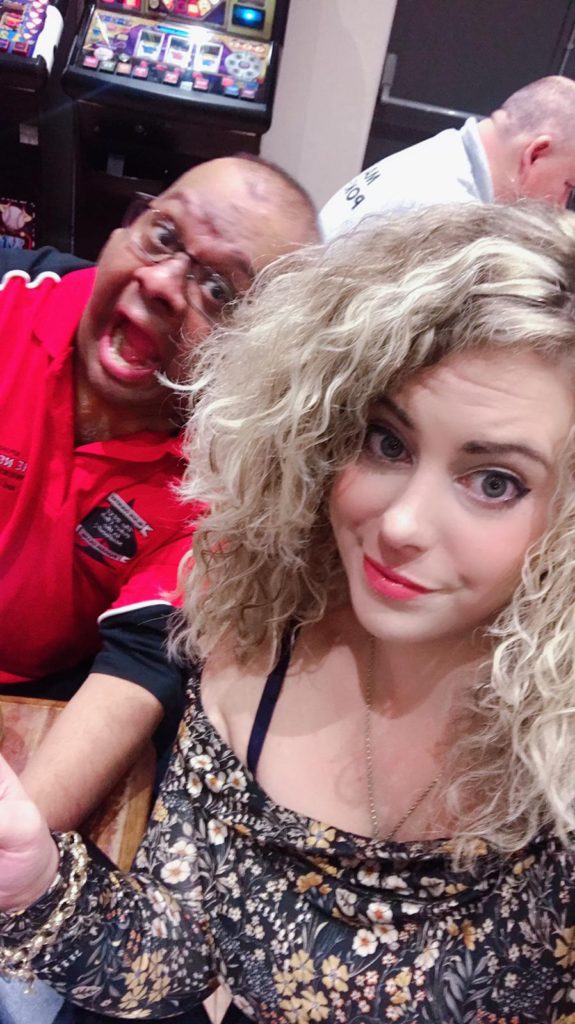 These happy times were to be shortlived for Rhoden however.  She gets tangled up with Cromwell who raises pre, it looks like she has shoved and Matt calls it turning his pocket Queens but in fact it had left Rhoden with a decision to make with only a couple of chips behind after calling.  Although priced in she folds to live to fight another day after seeing Cromwell’s cards faceup.

It was short lived however and Bri finished Laura off, but it was clear it was Cromwell she was blaming “wanker” I think the term that was used, lol.

9 players on the final table and Bri had put himself in a great position!  Pretty much a quadruple up bonanza yay!  All in vs Smithy, H and Nic Rawlings.  Mason incidentally folded A/10 so no aces left in the pack and Bri hit his set, very nice!  This would see Nic and H exit in 9th and 8th respectively.

On a roll, Bri then took out Matt McKinley in 7th.  His pocket 8’s enough to fend off the AJ of McKinley.

Matt Kay manages to treble up against 2 callers all in on flop, nice! Smithy incidentally beat Kev who was the shorter stack seeing him exit in 6th.

Cromwell was next to exit in  5th.  Cromwell with pocket 6’s on a 5,7,8 board.  Bri bets flop and Cromwell shoves.  Bri tanks and makes the call with QJ hitting Queen on turn.  Nice hand sir!

Mason would exit in 5th

Unfortunately no more hand updates, but as the events unfolded it would see Lee Mason exit in 4th, Adam Smith in 3rd, Matty Kay in 2nd and a big congratulations to the chairman and founding father Bri! Luckily for us Bri gives us a bit of a lowdown below on the final tables turning points.  A fantastic effort and one which sees his first win in 3 years, well played sir! 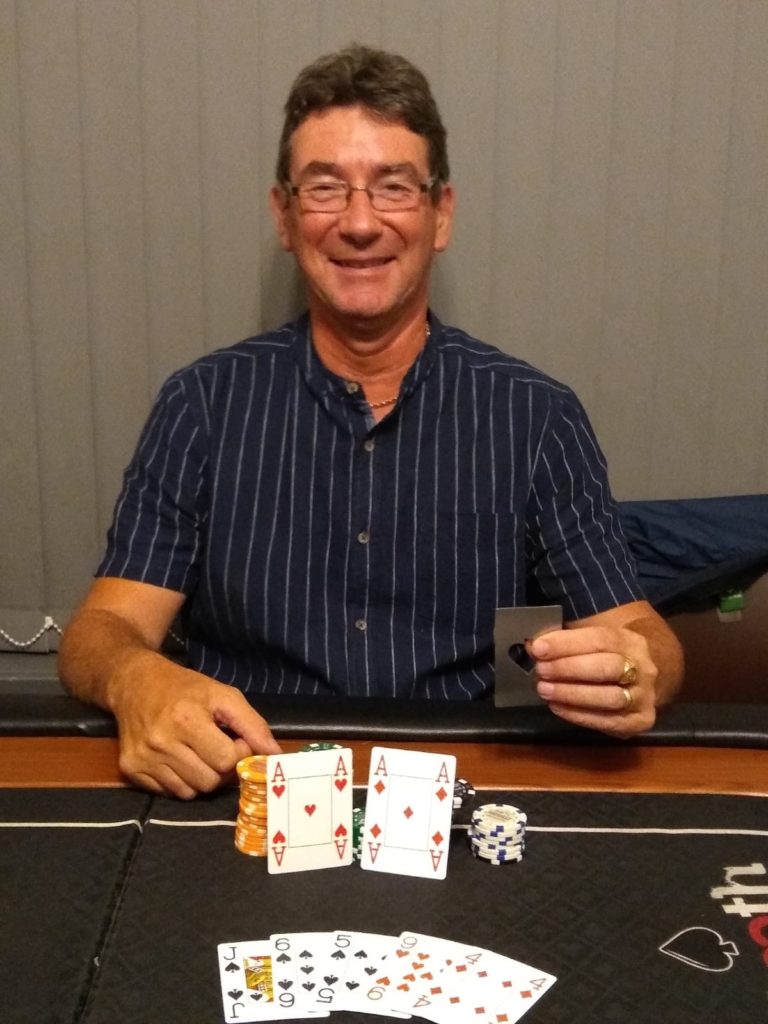 Brian had this to say on his win:

“It was great to win my first game in three years! It feels like a lot longer, although I did come close with a second last season. The pivotal hand came on the Final Table when Lee raised, Nic Rawlings shoved all-in, big stack Matt Kay re-sho ed all in too. I had KK and thought I was well ahead of both of them and so my shove was easy. But when H also shoved, I was worried he had AA, as what could he possibly do that with against three all-ins. When the cards went on their backs it was a great scenario for me, seeing AK, A7 and AQ….and when Lee announced he had folded A-10, my quadruple-up was almost secured. From there I read Matt McKinlay well to take him out and took a punt V Matt Cromwell which paid off too. Heads-Up v Matt Number Three (Kay) was a long battle which too-ed and Fro-ed. Just before the end my 2-4 flopped well on a Q-2-4 flop and I check-raised all-in, forcing Matt to fold. Just a few hands later I limped AA and Matt shoved. I had a very slight chiplead and the rockets held to clinch the win.“

“Not watching much new stuff at the moment.  Current series of Taskmaster is as great as ever, and about to start Catch 22.  It’s a great book, will it be a great TV show?”