A field of 238 players descended on the Grosvenor Casino in Walsall and created a £119,000 prize pool. This healthy sum was distributed among the top 23 finishers with a min-cash weighing in at £1,050.

The money bubble burst late on Day 2 when Howard sent Mahmoud Abdelkader to the rail in 24th place. Howard raised, Abdelkader three-bet and then called when Howard moved all in. Howard turned over jack-ten with the jack of clubs and was in a whole world of pain against the pocket aces of his opponent. Lady Luck was shining down on Howard, however, because the five community cards were all clubs and Abdelkader left the casino with only memories and a bad beat story to tell anyone within earshot.

ay 2 ended with 16 players, with one of the late casualties being GUKPT Manchester champion Andy Hills, who finished in 20th place for £1,020.

Amazingly, despite the third and final day starting with 16 players, it took a mere six hours for the tournament’s champion to be crowned. Among the Day 3 eliminated players were Matthew Davenport and Chris Johnson, the latter being the 10th place finisher to set the final table.

Jan Naderzadeh was the first player at the final table to be eliminated, his ace-king failing to improve against the pocket queens of Steven Healey before Harish Sahnan saw the last of his chips go into the pot holding ace-jack and running into the dominating ace-king of Tim Chung. Chung’s hand held and the tournament was down to seven players.

Those seven became six when Ming Ju clashed with Howard. It was a classic coin flip scenario, Ju holding ace-king and Howard a pair of nines. Ju paired his ace on the flop. But Howard improved to a set of nines on the turn before catching a fourth nine on the river for four of a kind.

Sixth place went to the dangerous Rick Trigg, known as “TheClaimer” online. Alli Mallu opened to 90,000 at the 10,000/20,000/2,000a level, Trigg moved all in for 410,000. Mallu said, “Let’s gamble” and called. Trigg showed ace-queen of spades and Mallu, the six-four of spades. Mallu’s loose call was rewarded with a six on the flop, and that was enough to bust Trigg from the GUKPT Walsall Main Event.

Next to crash out was Chung whose ace-queen lost to the pocket tens of Mallu after the latter flopped a set. Then Yiannis Liperis felt the wrath of Mallu’s run good when his king-jack couldn’t improve against Mallu’s ace-king.

Mallu then eliminated Healey when both players held top pair on a ten-high flop but Mallu’s jack-kicker proved to be vital.

Howard held a 2.6 million to 2.1 million chip lead over Mallu and both players opted to strike a deal for the remaining prize money and play on for the trophy. Mallu won the majority of the early encounters but Howard pulled back in front, being paid off with a pair of kings.

board with nothing but

and Howard called him down with

and was correct to do so. Mallu exited in second place and Howard became the 2017 GUKPT Walsall champion. 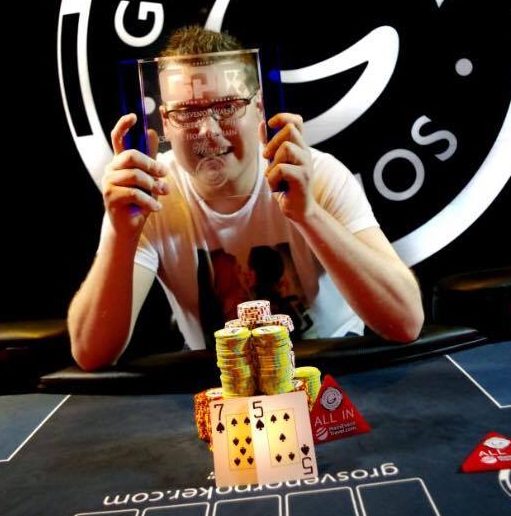