It was that time again and week 4 was upon us.  Lee Mason had won the previous game and put in some cracking results so far to take a commanding 5 point lead at the top of the table just ahead of Gaz Howard.  Could he push on even further or would one of the chasing pack have a game in which to catch up?  We were to find out.

26 players would start tonight’s game meaning no alternates and a great opportunity for all to get amongst the points at the New Talbot game.   Wasn’t long before Smithy and Ricky were battling it out as Cromwell raises to 250 pre which resulted in a call by Ricky before Smithy with the raise to 800.  Cromwell duly folds and Ricky calls.  A nervy community would see Smithy come out on top with his pocket 10s to make the full house vs Ricky’s Ace high.  Nice hand sir.

On another table meanwhile H was taking chips off Charles Mason early on whilst Nye was losing chips to most of the table.  60% of his stack gone after 45 minutes, ouch!

Nic Rawlings was having a good start; raising pre with K/9 and finding callers in Foyie and the other Nic (Cross)  The community dropping him a straight and a nice pot to go with it.  NH sir!

Cromwell had a little look and found some pocket 4’s electing to flat.  Checks all round with 3 players as he takes a stab on the turn.  Nic wouldn’t be going anywhere however.  The river dropped a 4 much to Cromwell’s delight, he got eager beaver and checks out of turn, whoops!  So now Nic Cross puts in a 600 bet and Cromwell only has a reraise on his mind thinking Nic has done it just to take the pot down.  Matt raises to 2k and Nic reraises to just over 4.  Cromwell flats leaving 1k behind as Nic turns over a flush and scoops up.  Nice hand sir!

Cromwell would be out first for the evening in the next hand getting it in with A/2cc.  3 players saw down the community and the Ace on the JQKA board wasn’t good enough as the 10 ensured the straight sending Matt packing to Hill Street!

Charles Mason and Steve Healey had had a previous moment earlier with Mason coming out on top.  This time however…. no, same result and Mason finished off Healey with an unfortunate set over set scenario.  Unlucky Steve!

Who’s a happy chappy then?!

Nye would leave us next in 24th in a very unfortunate way against Gaz Howard. Gaz slow plays the trips on an AA10 board as Nye holds pocket 3’s.  Nye delighted in seeing the 3 for the full house on the river gets it in only to be called by Gaz holding the A/3  Unlucky Nye and nice hand Gaz sir!

Ricky was getting a nice double up by way of Nic Cross with 2275.  Buckland seemed up against it a 3:1 do A10 vs AQ but a 10 on the flop gives Ricky some breathing space, nice! Or was it?  only 2 hands later and Ricky gets it in with JJ vs Foy’s AK. A king on the flop and the chips were transferred to Foyie, a cruel game! 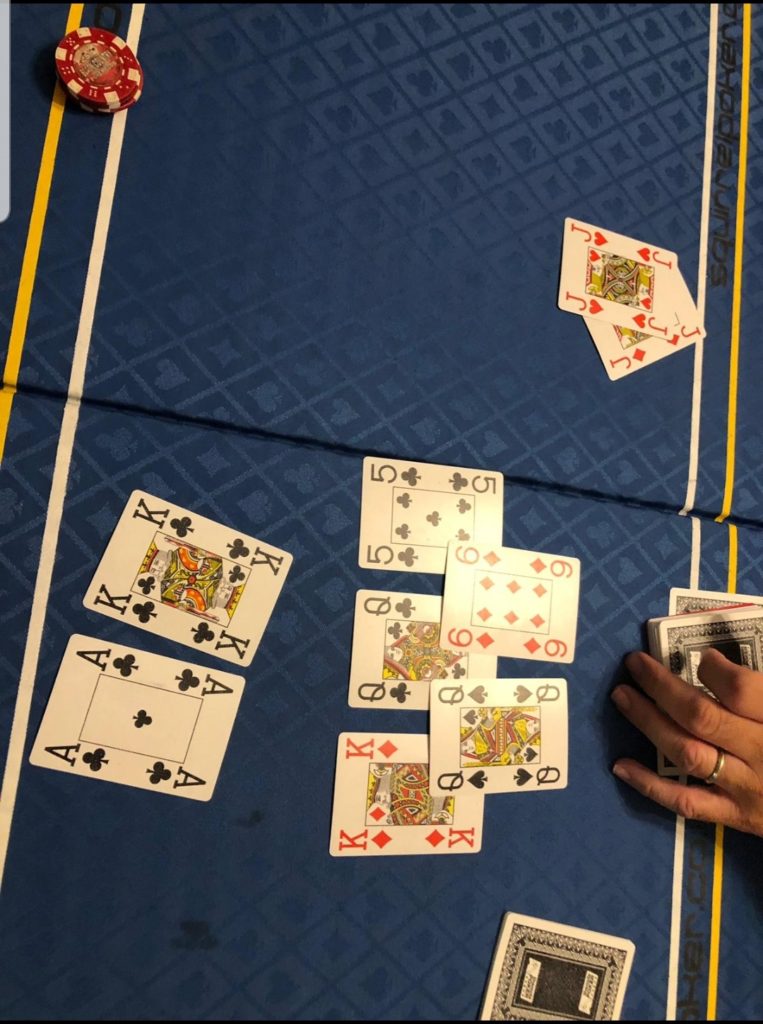 It appeared that the Rhoden household would be having some domestics after Kev decided to take his Mrs out, oops and good luck! 🙂

Not content with this chip haul Kev would then find a double up against Dan Ryder, trips vs 2 pair, nice! 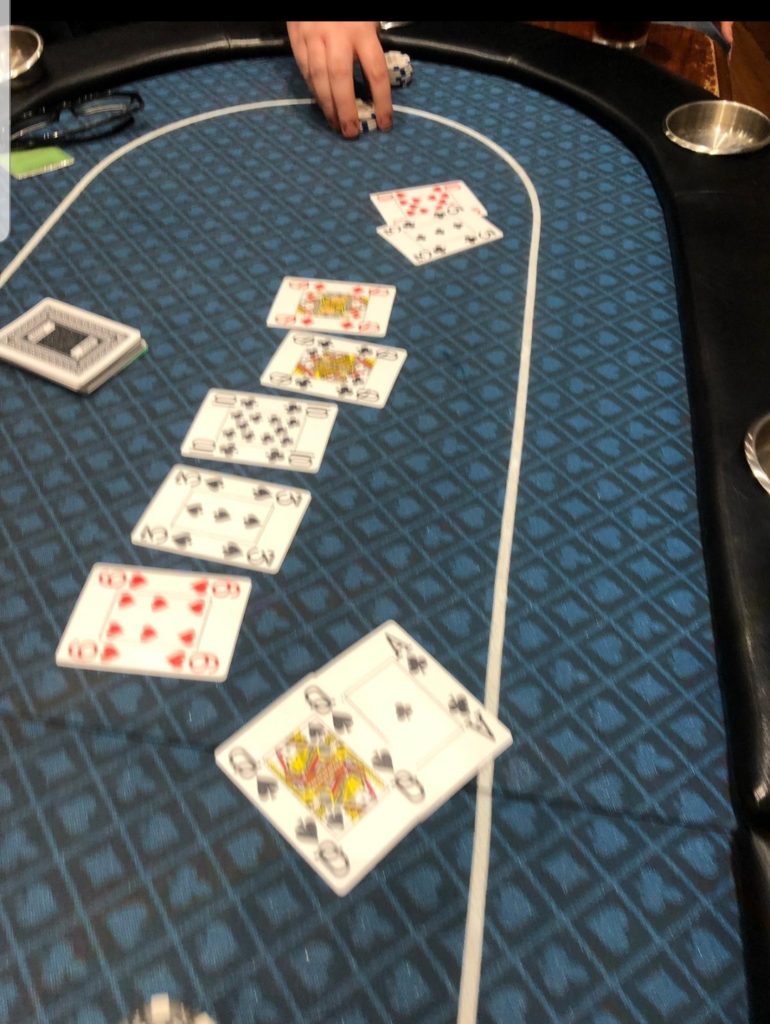 Looks like Adelaide was having fun with a unsuspecting player.  Guess who?! 😀 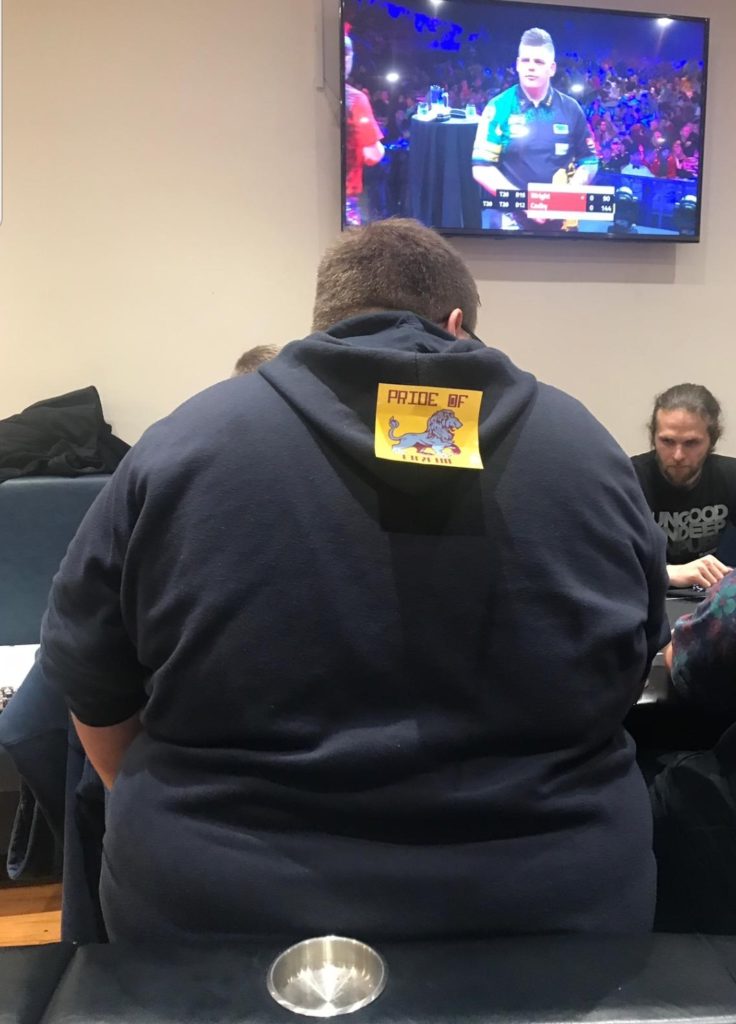 Mason takes Godwin out in 15th and continues his fantastic season, AK vs AQ!  The final table becomes ever closer!

Smithy gets it in with pocket Kings vs Matt McKinleys’s AK and unlucky for it not to hold.  Nice hand Matt!

Foyie keeps pressing on nicely, this time with a double up courtesy of Lee with the pocket Queens for the set, nice hand sir!

Dan Ryder would be our 10th place finisher collecting 1 point for his troubles by shoving 10 bigs with pocket 6’s.  Kev calls with KJ and hits the Jack on the flop.  Well played Dan

The final 9 would look a little something like this

Rich H would by our 9th place finisher who shoves with QT on flop/  Kev M calls with AK and it holds.

Meanwhile Amy would get a double up courtesy of Matt McKinley’s Tod hand.  Nice!

It wouldn’t last long however and Lee Mason earns a double up on almost identical stacks leaving Coshan with 300 blind vs blind!

Foyie would take a double up courtesy of Adam, nice hand sir on the river no less!

Foyie would play the check raise all in on flop after Matt McKinley for 4600 and wow, just wow!

Kev shoves his small blind with 5/2 and Smithy calls with 3 blinds.  It wasn’t to be and Smithy exits in 7th.

Adam Sharples would be shoving blind and found a caller in Kev for 5800.  Adam’s 8/9 ws no match for the A/7 and Adam would leave us in 6th well played! 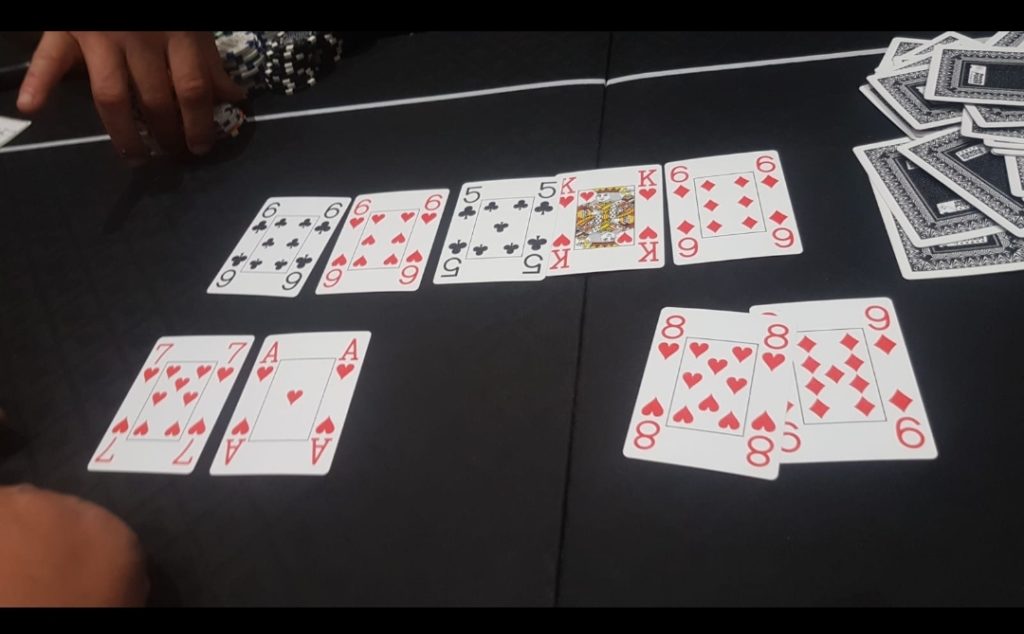 No updates now until remaining 3 and that would see top spot battled out by Matt McKinley, Matt Kay and Paul Foy..  Let battle commence!

A long hard slog and 01:30am would see Foyie eventually take 3rd spot.  His J8 no match for the set of 4’s of Matt McKinley!

It would only take 20 minutes to find the winner between Matt Kay and Matt McKinley and the hand that broke the camel’s back would be the mighty pocket 2’s up against the KQ which would ensure victory for Mr. McKinley!  Well done Matt Kay on a valiant attempt for top spot and big congrats to Matt McKinley on taking it down!

Matt had this to say on his win:

“The cream always rises to the top, Desmond a to too 😀.“