The time had finally arrived for the midseason game where the league would start to take shape and we could identify those pushing for the trophy and those with a bit of work to get those all important seats.  Following on from last season’s success tonight’s game would be a shoot out.  3 tables with the top 3 and longest lasting 4th place would make up the final table to get the points.  Could Kev Berrie reclaim the game he won in its’ maiden appearance from last season?  We would soon find out! 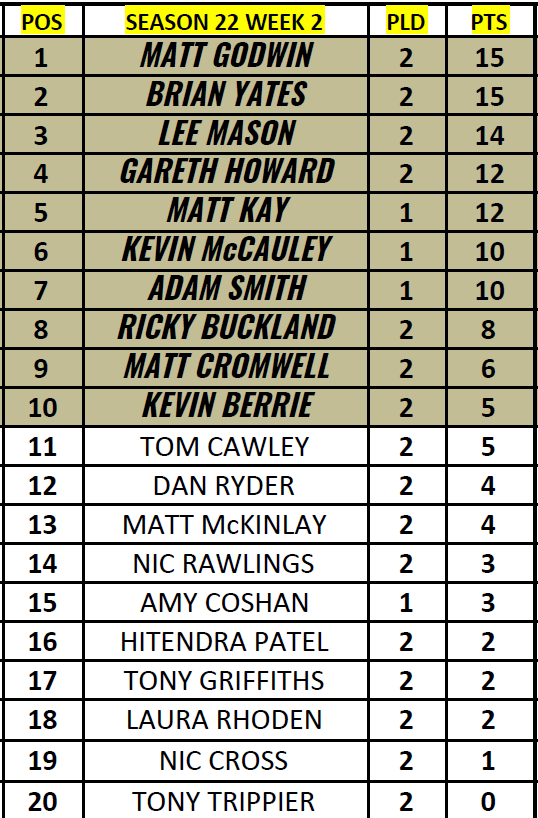 30 players would start tonight’s game meaning no alternates and a maximum capacity to boost the prizepool, nice!

Dan Ryder was living the dream right from the get go with this little beauty.  Quads against Rhoden but he hadn’t paid his poond to take part in the high hand!  Cue Jim Bowen, “Look what ya cudda won!”

Not long after Ryder would be involved again, this time on the receiving end of a chip loss to Pickering’s boat!

Gaz was happy to take a chunk of Nic Cross.  Both hitting a flush but Gaz with the nuts.

Mason takes out Mooch who was gutshot straight flush drawing and nut flushing!  All in on flop and Mason somehow survives, unlucky Mooch!

Nic Cross would exit in 26th place from 30.  Steve Healey taking the chips and straight after Tony Griffiths would exit at the hands of Kev by way of straight.

Ryder doubles up vs Matt Godwin in another big hand, full house over full house, wow!

We thought we’d seen our fair share of big hands, but there were more to come by 9pm.  This time Ricky with quads against Kev’s full house, sheesh!  New dealers P-LEASE!

Tod would exit in 24th after Cromwell raises to 800 over a few flatters.

Tod thinks and decides to shove for 3.5k.  Cromwell tanks for ages and calls with JKdd vs Tod’s 89dd.  No help on the board for either and Tod gone by way of high card.

Steve Healey appeared to be having a good evening, this time being dealt aces up against Matt McKinley’s pocket 10’s.

The players were whittling down and this time it would be H to exit in 23rd. His KJ no use against the A/Q of Buckland all in preflop.

Godwin, after a bad beat earlier was handed a lifeline when he found a double up by way of Liam.  His pocket Jacks deciding to hold up this flip of the 50%er

So close to a final table appearance for one lot as another exit would leave them with 4 players.  Tom would be the unfortunate one as his pocket 10’s lost out to Gaz’s A/K.  A King, an ace, but just to top it off they turned it in to a nut flush.  Nice hand Gaz.

Godwin would get involved in a massive pot pre as Rob Hewitt put his tournament life on the line.  Hewitt with the 10’s, Godwin gutted with his 4’s.  Then the poker Gods stepped in…  Hewitt gone in 18th.

One table had a final three opportunity as Gaz gets his A/J in vs Nye’s A/4.  Nye running like Tod and gets there obvs.

Cromwell would leave us next.  He 3bets the pot and gets called by Liam.  Both check the flop.  Cromwell bets the turn and all in by the river as the ace of death drops to give him 2 pair. Liam instacalls with the trips.  Nice hand sir!

Smithy may have been out, but it didn’t stop him from going all in with his pint, all over the table.  doh!

From here on in places made points made prizes!

Liam would exit first in 10th

This win wouldn’t help Kev much however as he exits after Tony in 8th.  Kev would be followed by Rich Hughes in 7th, Matt Godwin in 6th and Ricky Buckland in 5th.

Cashing  and those all important points would see Steve Healey in 4th.

Nye Venable exit in 3rd.  He shoved his 10/6 suited which he’d grown accustomed to one too many times and this time found a caller in Gaz with A/9 to leave Gaz Howard and Lee Mason (who have both performed strongly this season) to commence battle.

After a long heads up Lee managed the double up with QJ vs Gaz’s 44 and the final hand sees Lee win with 6/9 up against Gaz’s AJ.  A valiant effort by Gaz getting it in good, but Lee will take it as both rack up the points.  Congratulations!

Lee had this to say on his win:

“I am very pleased to get my first win at bcpc, and I feel like I’m playing some good poker having made the last 2 final tables although admittedly did not expect my first win to come when I got to the final table with 2 and a half big blinds, but luck must have been on my side. Just hoping to keep this good run going for the rest of the season to give myself a chance of winning the league.“

“Oh man, I am living Catch-22. Definitely captures the spirt of the book. Taskmaster has just finished so obviously everyone should catch up with that immediately. Also Matt C says you should watch Queen of the South. The TV show I assume, not the footy team.“