BCPC Season 18, Game 3 – Friday 14 July 2017 Game 3 – It was slightly lighter on the numbers tonight with 20 runners in the game.  Nic was looking to increase his lead on the pack following a fine first 2 game run with the likes of Hitendra, Charles and 15th July birthday boy Adam Phelan chasing behind.  (Happy birthday Adam!) 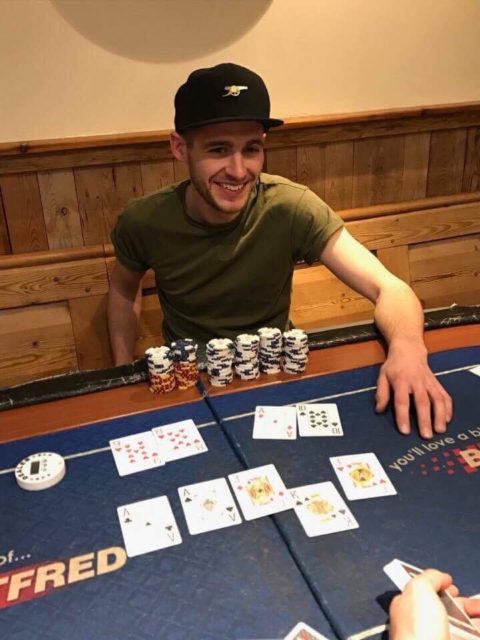 The leaderboard after the first 2 games looked like this:

Tonight’s game The night saw a few monster hands worth mentioning and the smaller turnout didn’t stop the field from having a good old friendly game of poker.  Tony Griffiths ended heads up with Chris Baker with a board running of 66446.  With the full house on the board Chris takes a stab and bets big, Tony makes the call and Chris has the other 6 giving him a health stack early on with quads.  It wasn’t long before 3 tables became two; Tod being the man to make way for the rest.in a battle of the blinds.  He gets it in with pocket 8’s only to find Mr. Simon Smith sitting pretty with pocket 10’s.  Just over 5/1 chance of success, but not tonight and Simon’s 10’s hold.

Birthday boy Adam Phelan was given a couple of presents courtesy of the dealer Matt Cromwell two hands in succession;  Pocket 6’s, which gave the straight only to then be dealt pocket 5’s the following hand and yep, you’ve guessed it a 4-6-7-8 board.  NICE! 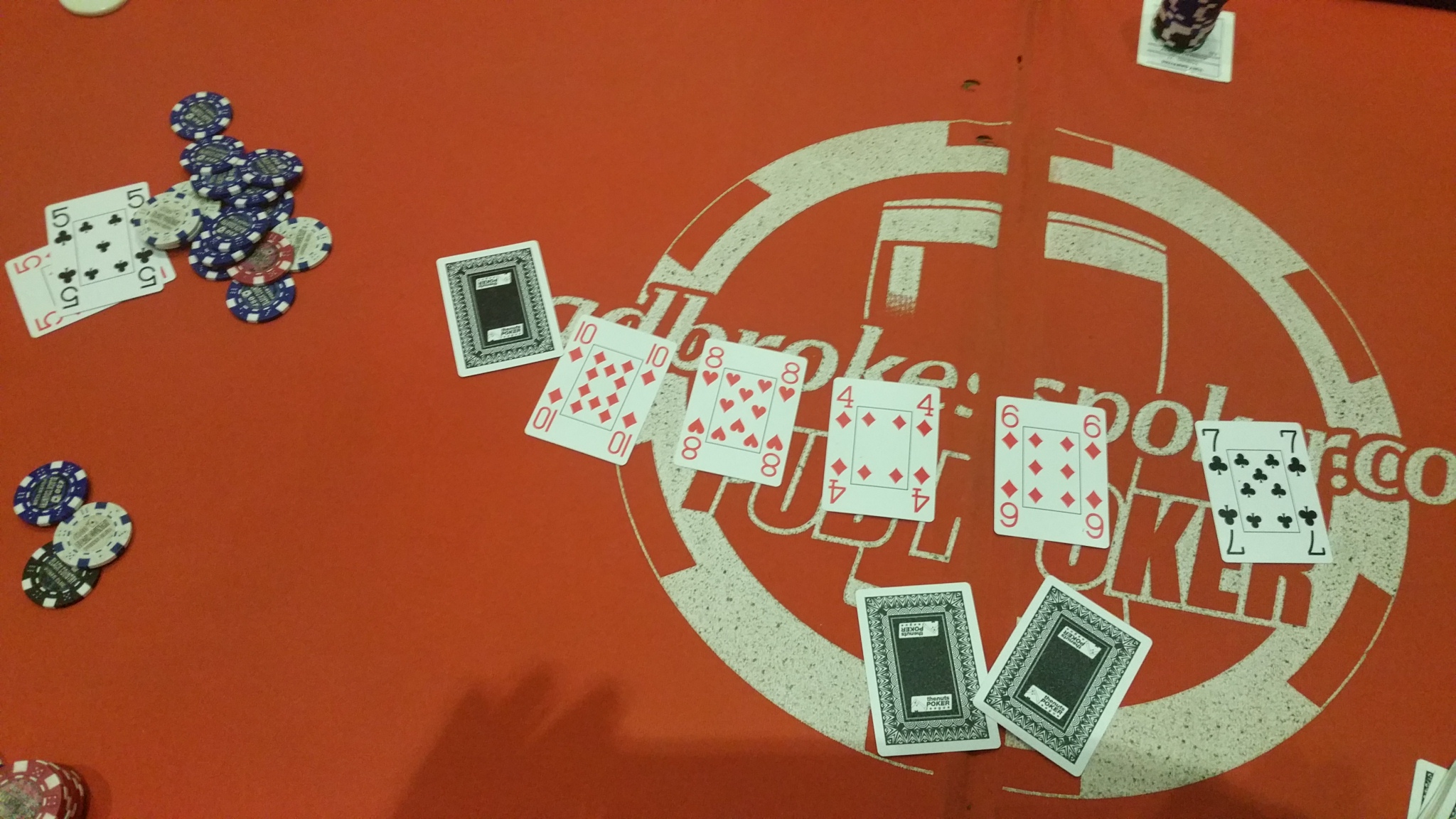 It was a night of the 8’s when Mark England got it all in with his pocket 4’s fairly short stacked.  He finds a call in Tony “former, current and future World Champion” Trippier and Trippier hits trips which sent Mark out of the game.  Mark asked where the 4’s were and they were duly delivered, in the next hand, sorry Mark! 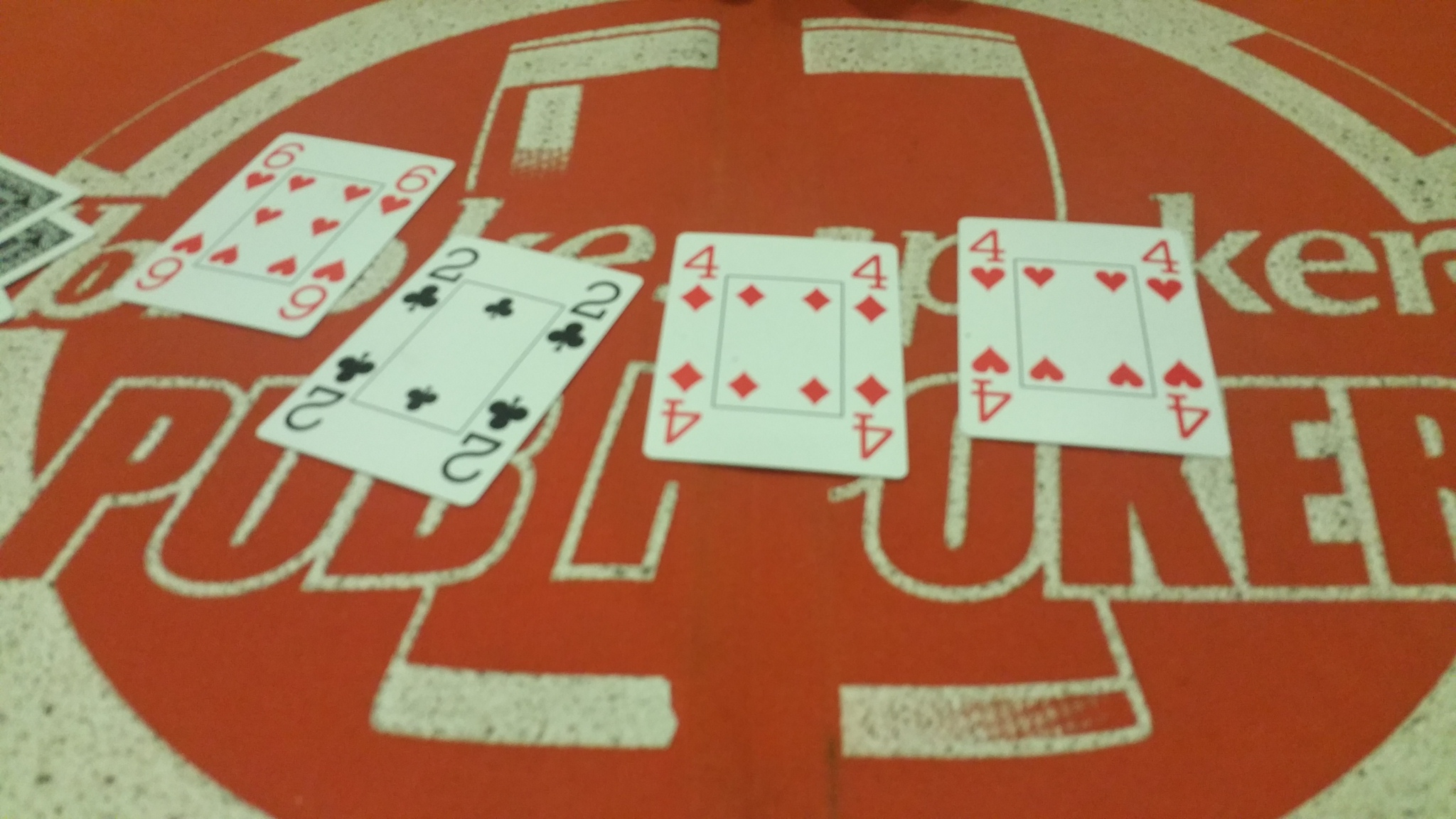 Down to the final table courtesy of some three way action between Claire Thornton, Amy Coshan and Kev Berrie.  Claire short stack shoves with the Tod J6 and gets two callers in Amy and Kev.  Flop comes down King x 4. “check” ” “check”, rag turn and a shove call on the river.  Amy turns a set of 4’s only to run in to Kev’s set of Kings giving a double elimination and a tidy chip stack for his efforts.

Final table action Matt Cromwell gets it in with 9/10c and finds a caller in shorter stacked Charles Mason’s King Jack.  A king on the flop pretty much kills Cromwell, then another on the turn.  Matt’s eyes deceive him and says “quads?”  Then river comes another King.  Prophecy upheld, 4 King hell for Matt, but quad heaven for Mason and a late birthday present with the high hand bonus! 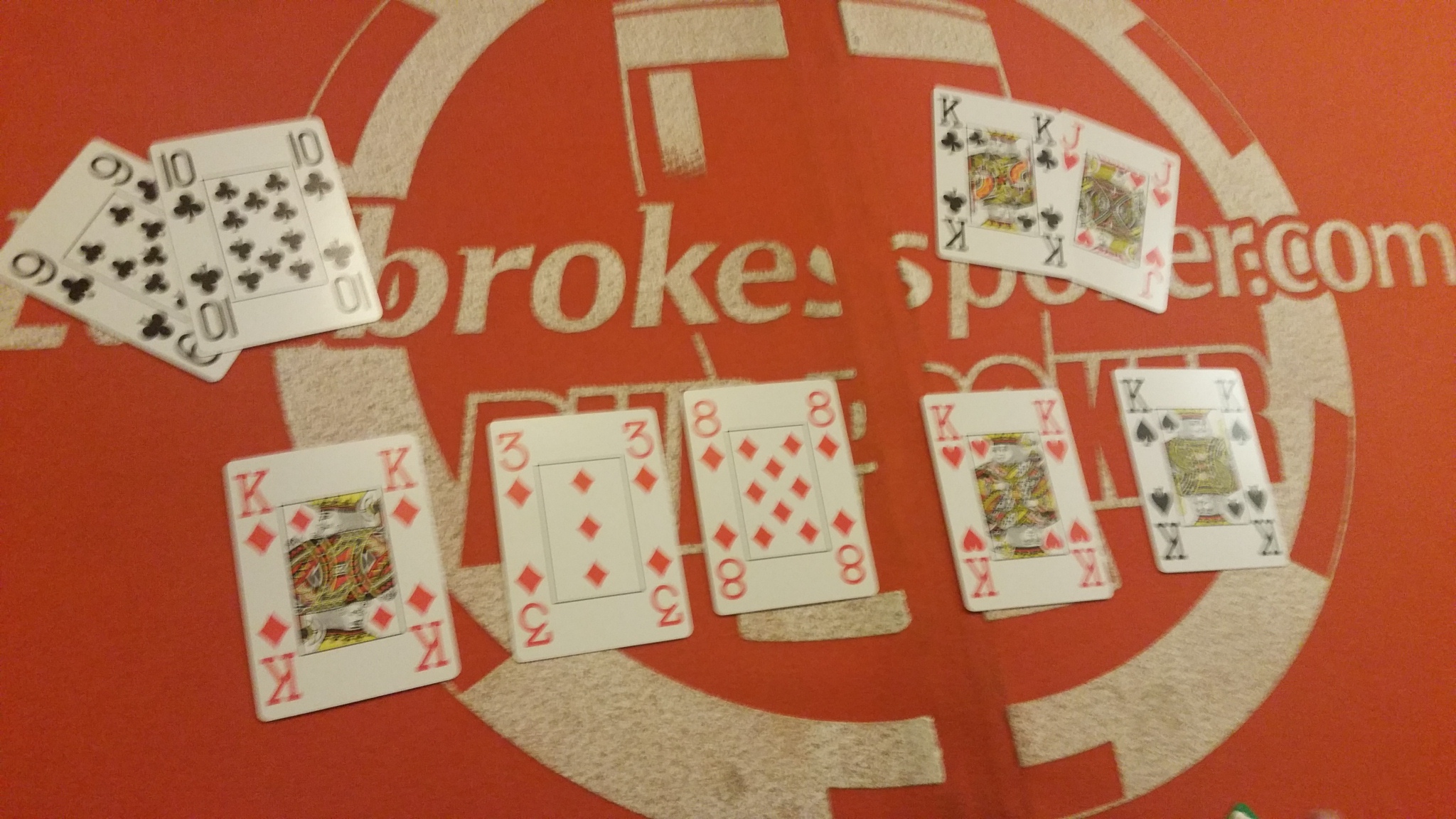 Even more high hand action 20 minutes later with Simon Smith betting strong and getting calls along the streets by Brian.  Scare card for Simon on the river and a big 5k bet by Brian.  After a long think Simon folds and Brian shows the straight flush 6-10 taking I believe a massive £9 from the remaining high hand pot 😀

The high hands didn’t stop there oh no no!  Matt Cromwell holding 3/5 spades sees a flop with Kev Berrie and Tony Griffiths.  10-A-A, checks all round, turn A, all check then 3 on river.  Matt tanks for the remainder of his stack with Kev Berrie calling.  Matt then proceeds to announce his full house out of turn.  Tony politely says he’s beating Matt and still folds leaving Matt to see the inevitable.  Yep, quad Aces, nice hand Kev! 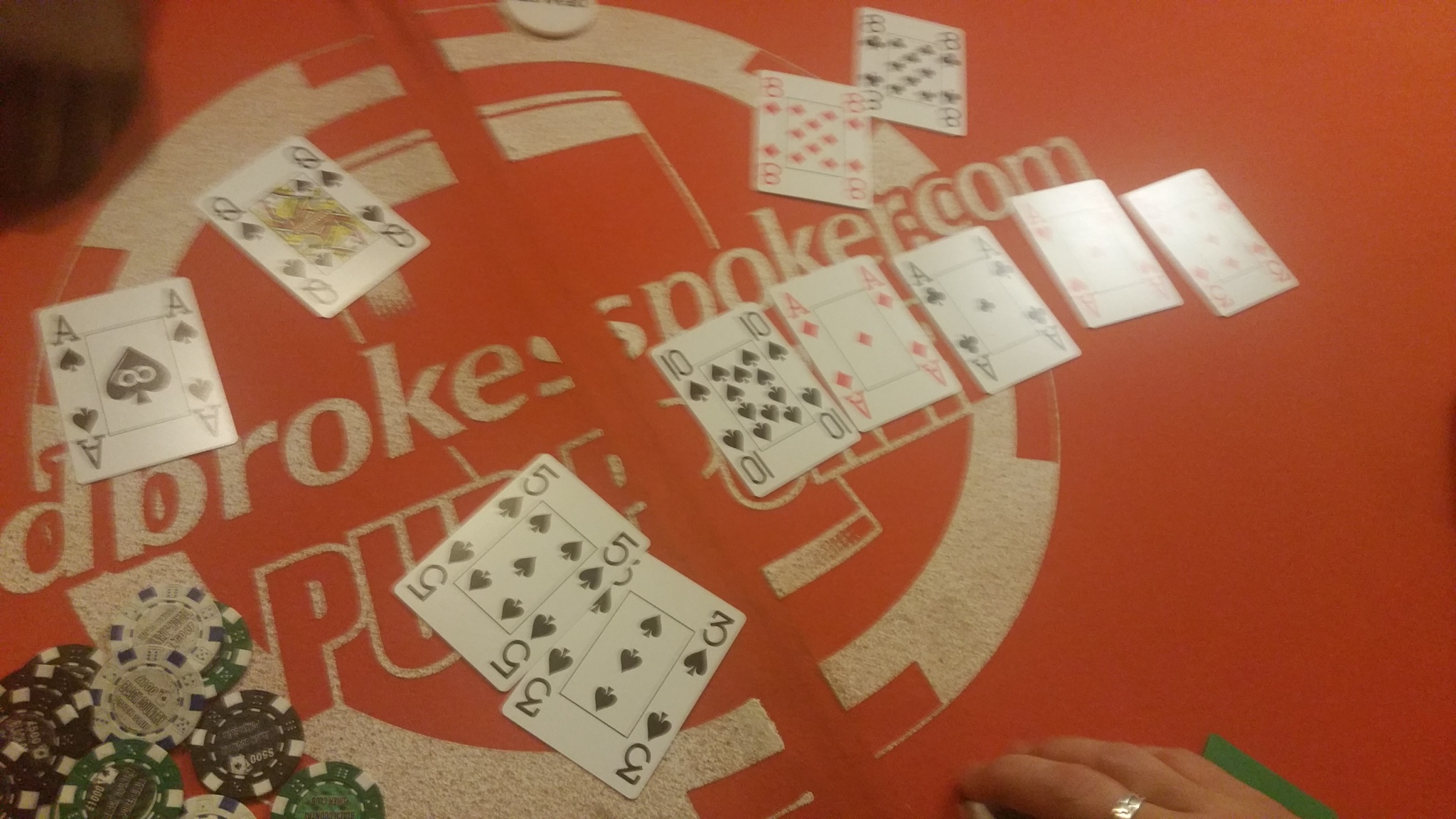 Next hand and Phelan bets, Tony Trippier shoves and Simon Smith reshoves giving Adam food for thought.  He makes the fold and the gauntlet is laid down for a heads up classic; Tony’s Pocket 5’s vs Simon’s Ace King.  Tony slight favourite not working this time as Simon hits the straight off the flop.  Goodnight Mr. Trippier sir! 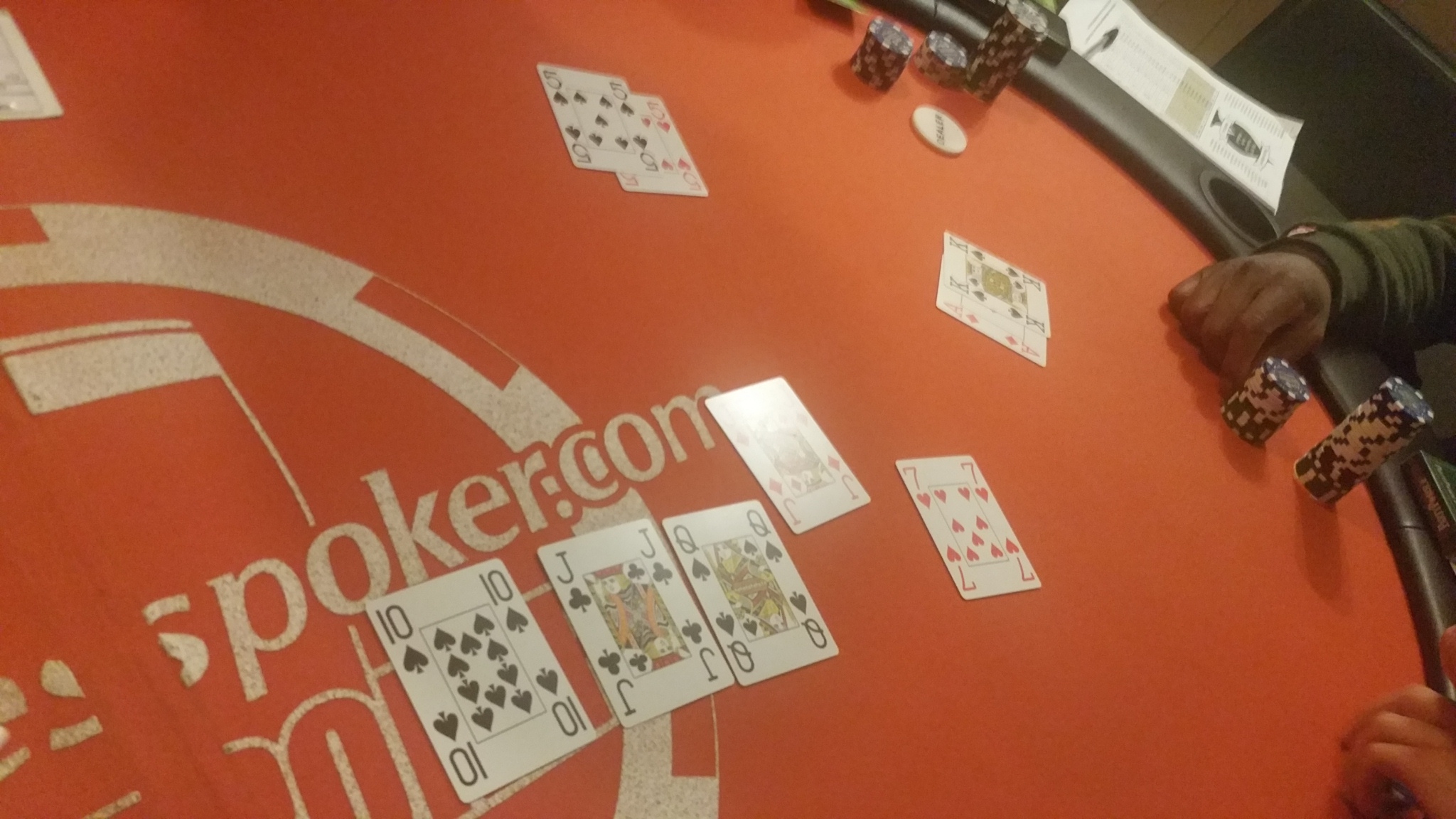 From this point I’d made an exit, but word on the street has it that Ricky got to heads up with a very large stack over runner up Kevin Berrie whilst Adam earned a nice little birthday present from the BCPC for 3rd.  Ricky doesn’t remember the winning hand and everyone forgot to take a picture so the image up top is one of Ricky playing poker at some 2nd best poker club in the Midlands(ish) in Malvern. 😀

In Ricky’s words he played nice and steady and won the races he should have won.  A very impressive start from the newcomer and a lot more to come from him well done!Special thanks to Mark England for dealing the final table and well done to Tod for winning the BAPWAC seat.

“Out with the father”

Remember to check out the calendar of upcoming games and events.  The heads up competition isn’t far away now 18th August. If you’re new to the club, have a look around the website. If you have any comments, please let me know.