Hello!  Back off holidays and now good to keep up the blogs!  Big thanks to Tod for doing the last one, normal service now resumed!  Week 5 down the New Talbot and we were on the home stretch of the 6 game season.  TT had managed to bag his first points of the season which would mean that Tod would still be sitting in 1st place with a healthy 34 points;  A bit of a cushion in front of 2nd place H by 13 points.  Have a peak below and thou shalt receive a bit more information hither!

A solid 25 players started tonight’s game at the New Talbot which was pretty good considering all the late arrivers, Jack dropper offers and Foyie non-showers for the game.  Nye was BCPC’s favourite for first player out, but couldn’t make it in time for that so Clare Bailey duly picked up the responsibility succumbing to the might of Marc Ward’s hand.  King’s vs Aces no less.  Unlucky Clare!

Lee Mason wasn’t having the best of starts either and looked to be in good shape come the flop.  His holding?  Aces on a 4, 9, T board.  It goes in against the might of Dan’s KT and the nasty river Ten arrived to decimate Lee’s chipstack, ouch!

Rhoden may wish that she hadn’t dropped the Jack off, by 20:35 she was all out and what a way to go.  A flopped straight getting done over by Marc’s full house.  Unlucky Laura! 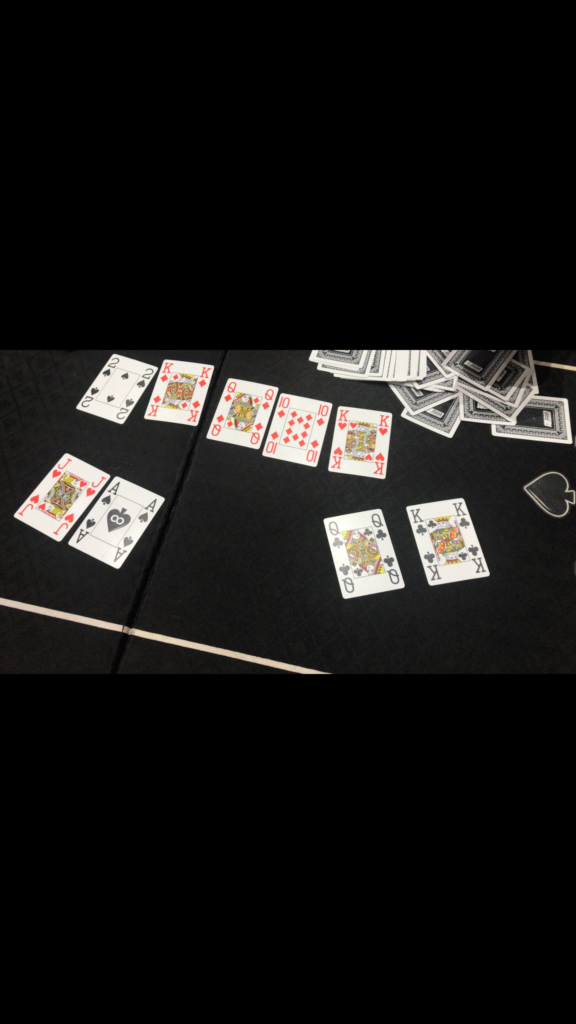 It was good to see Tony Trippier out of the shirt of shame this week… Again.  This time deservedly so after last weeks’ win.  HI TONY!  #LIKE 😀 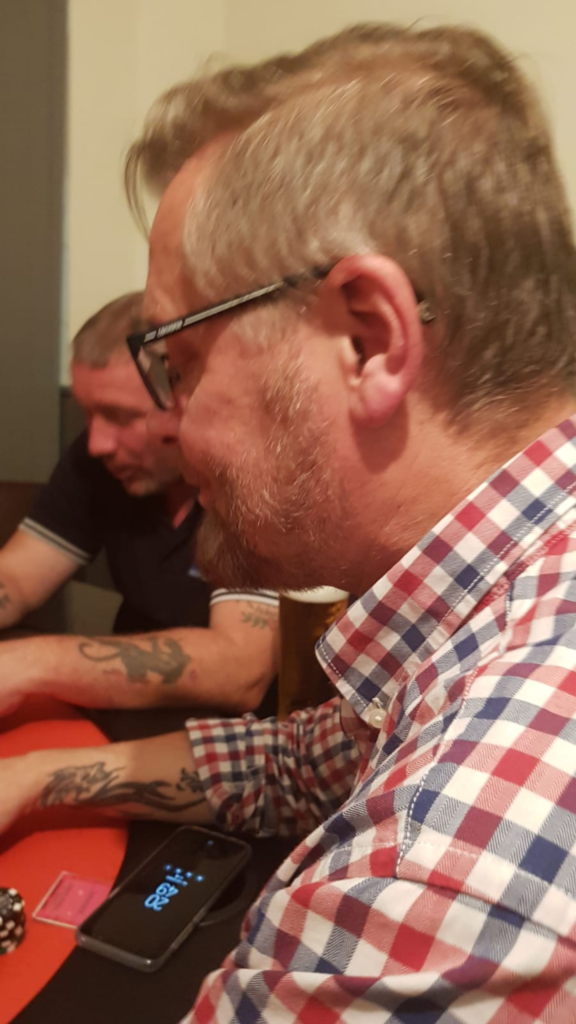 Time was passing and players were a going, Matt McKinlay and Charles Mason were the latest additions to the exit door by 10pm.  The latter Mason short stacked got involved in a 3 way with Dan and Nye.  Unfortunately for Mason his A/10 was shared with Dan’s of the same cards giving Nye a successful chip boost bonus holding pocket Kings.  Nice one! 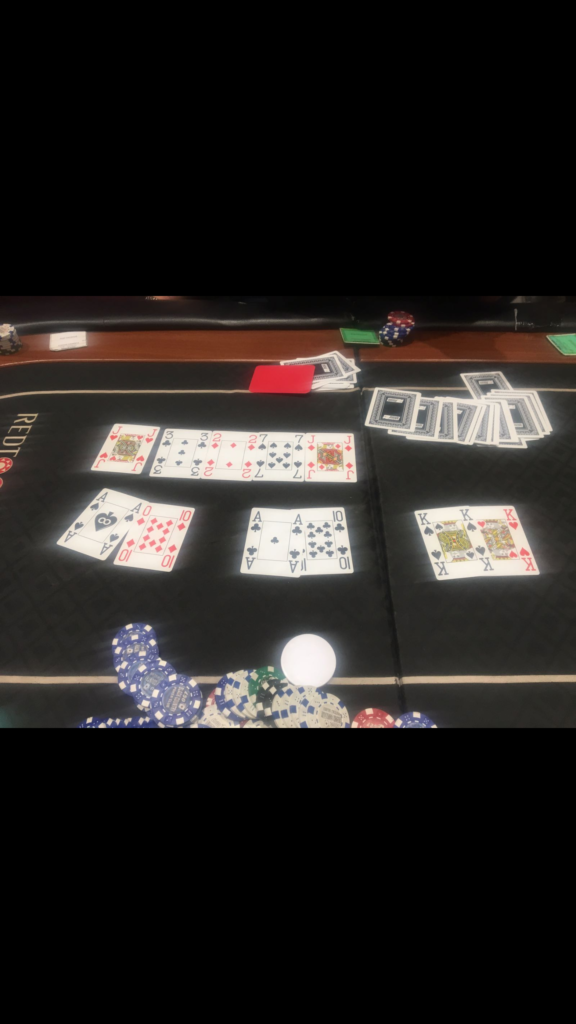 Steve Healey seemed to be using his 9 lives up in one evening.  The cat, or river rat had done it again and managed to make his pocket Q’s come good against pocket Aces with that 5th and final card. 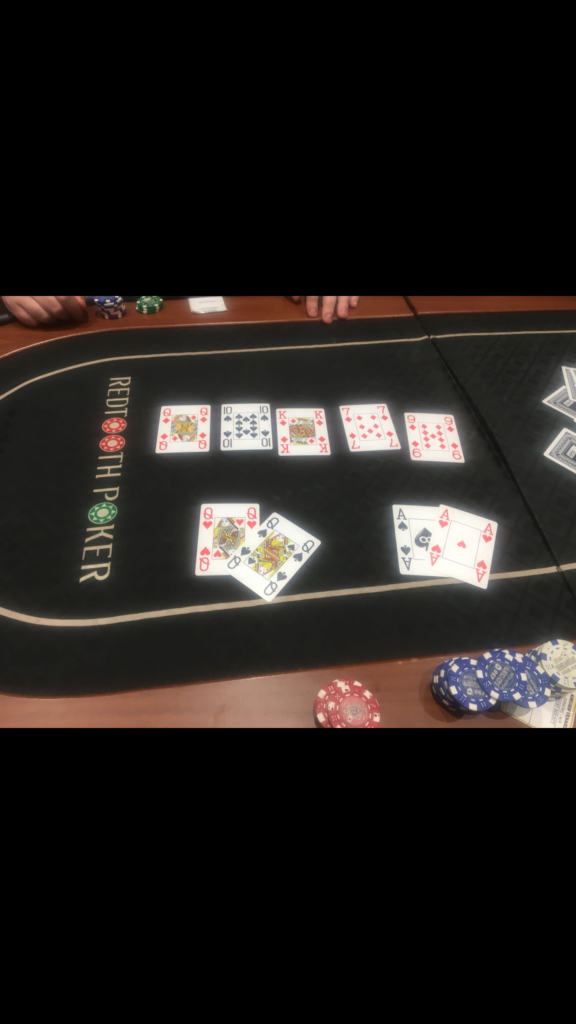 H meanwhile was pushing on in his quest to catch Tod at the top of the table.  Doubling up through Marc wouldn’t do anything to hurt his cause. 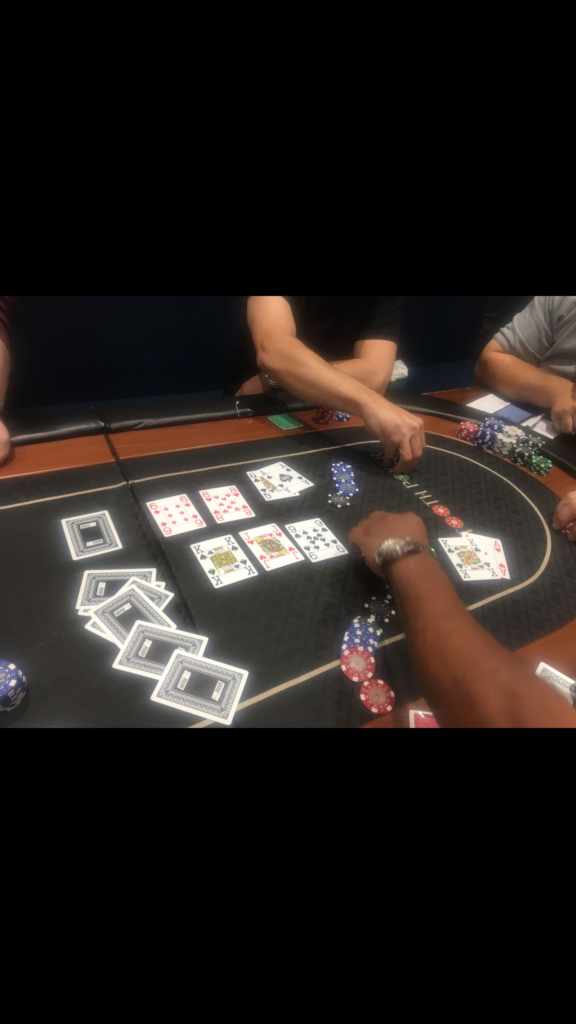 We were now pushing ever so close to a final table, unfortunately for Mark England he wouldn’t be joining them as he exited the fold.  Meanwhile Dan was doing his best to make that table and pocket aces double up against Marc Ward’s A/K would look to help him cement that. 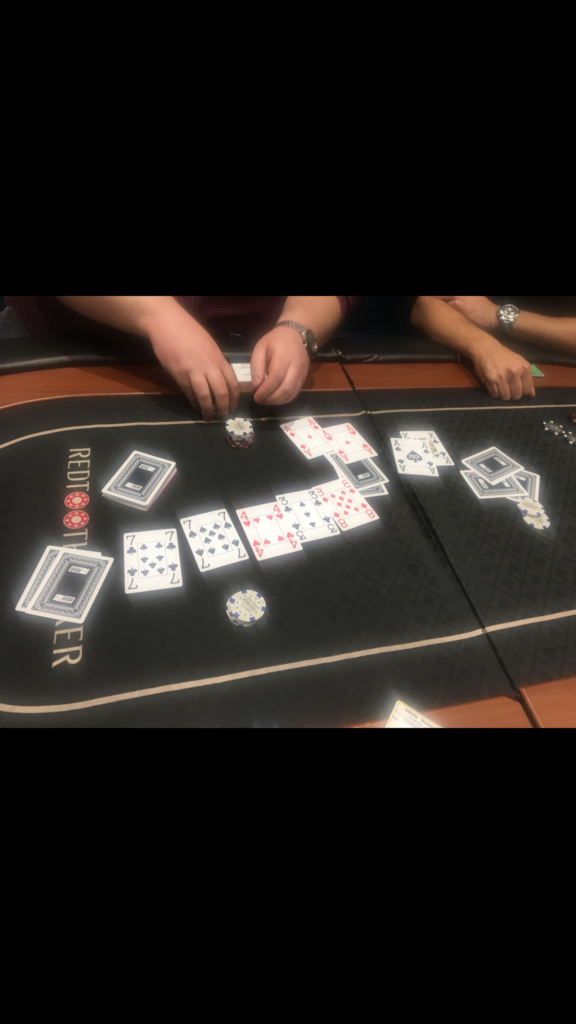 One more exiteer before the final table could commence and that unlucky contestant for game 5 would be Nye who 3 bets pre with pocket 7’s and finds a caller.  An enticing flop of 8, 5, 3 appears to be pretty safe to get rid of the dregs and shoves the flop.  Unbeknownst to him though he would be finding a caller with A 8 suited and the rest is history.  GG Nye! 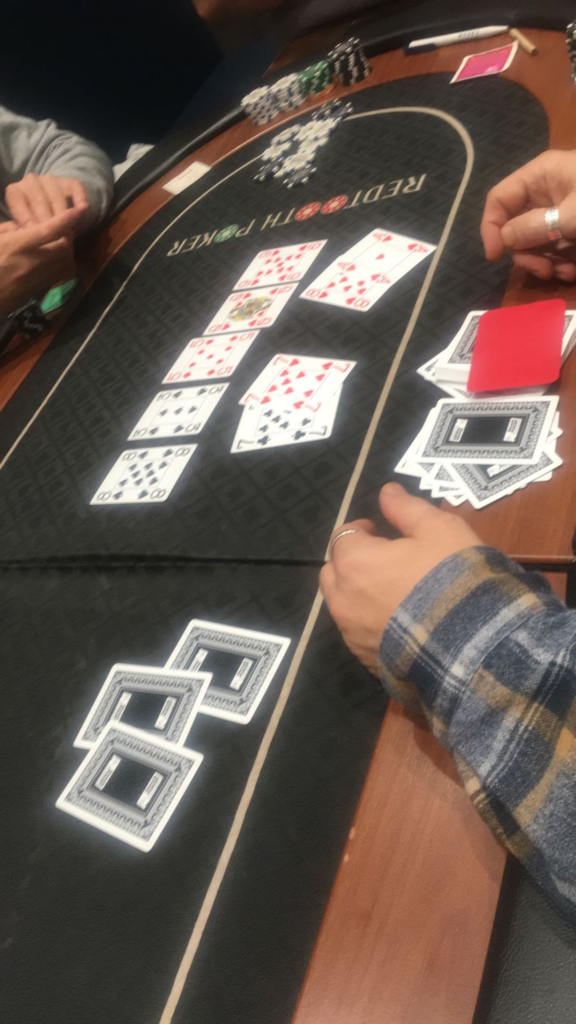 We were down to this game’s select few and all were biding for a place up the ladder in the quest for points but who would take it down?

Trippier; In a bid to extend his points from last game’s 1st place tried to increase his chip lead when being dealt pocket kings.  Unfortunately for Tony, nobody bit

In unbelievable fashion we were to see a 4 way all in preflop.  Tony would see some action this time after being dealt pocket Kings… AGAIN!

I’ve tried to upload the video but it was too big so basically all preflop Mooch has pocket 3’s, Marc Ward has pocket 10’s and there’s an A J suited to add to the mix.

So flop comes 9c – JS – 6c  Top pair for A/J and Mooch with a unlikely flush draw holding the one and only club of all 4 players.  Tony still leading here with pocket Kings.

Turn comes Ac so AJ now takes the lead with 2 pair, TT’s Kings need a Kh on the river, Ward needs a 10h and Mooch is praying for a 3 or any club.  And well…would you believe it, a 10 only dropped.  And wouldn’t you believe it still, it was only the 10 hearts giving Marc a miraculous set and takes down the pot against all odds!  WOW, just WOW! 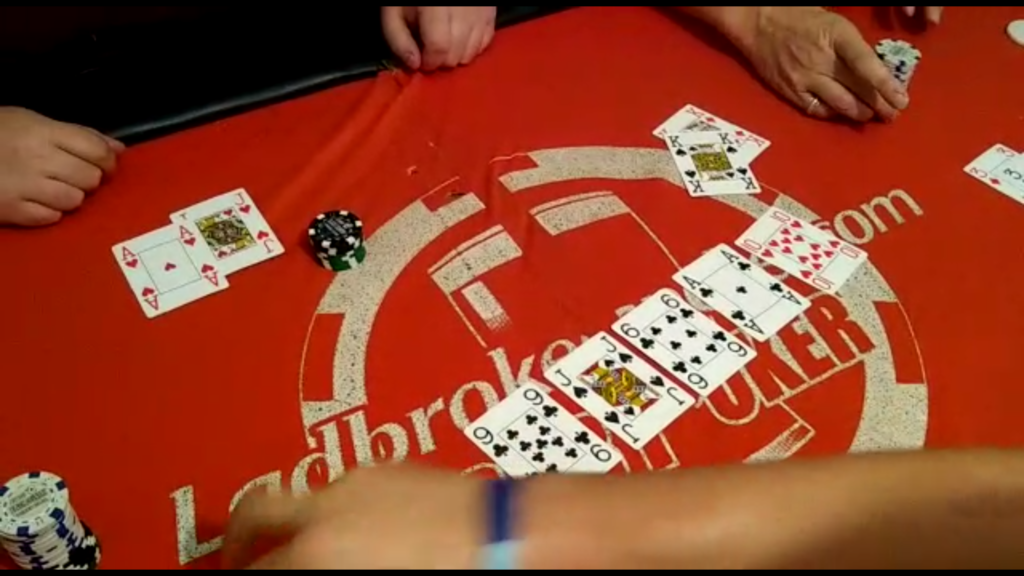 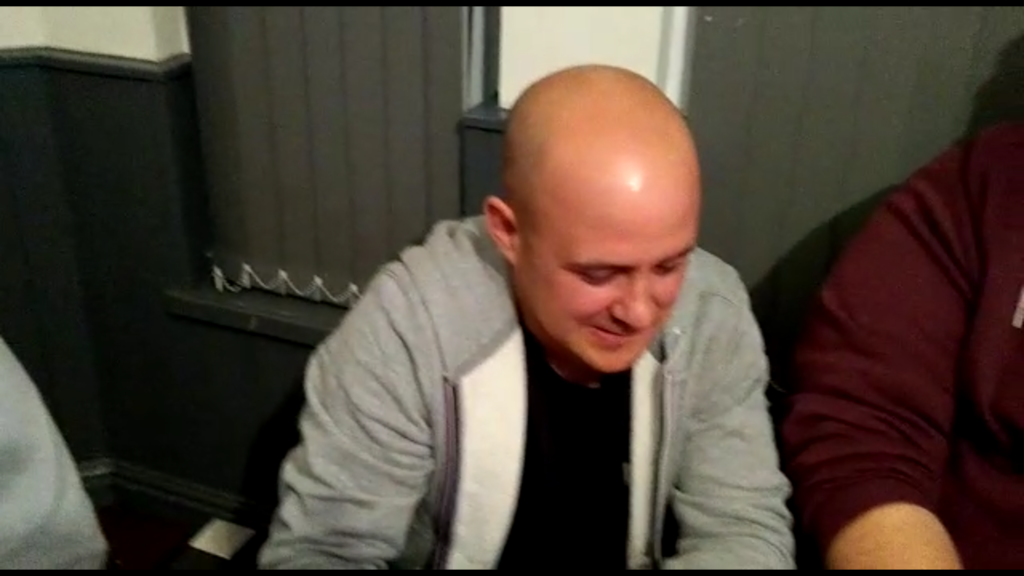 Get out of jail free card anyone? 😀

With a few now on fumes H decides to eliminate Tony.  His pocket Aces dominating TT’s A/4.  Well played Tony.  Not content with this H then goes on to take out his main rival in Tod leaving 6 left.  This meant that if H could win tonight’s match he would indeed pip Tod at the top of the group.

Next to exit would be Rich in 6th and with that Liam would be continuing with a large chip lead with 5 remaining.

Steve Healey looked to be heading for the exit door 3:1 underdog holding J/7 against  H’s A/7  Both would hit a 7 on the flop, but a Jack on the river would double Steve up.

Brian’s Q/10 would be pitted against Liams’s QJ on a QJ5 flop.  Both playing the cagey check on the flop before it goes in on the 8 turn card.  Brian exits in 5th well played!

Marc Ward who was counting his blessing earlier just couldn’t quite see it through but an extremely respectable 4th place after losing to H’s pocket Aces (again)  with J4. 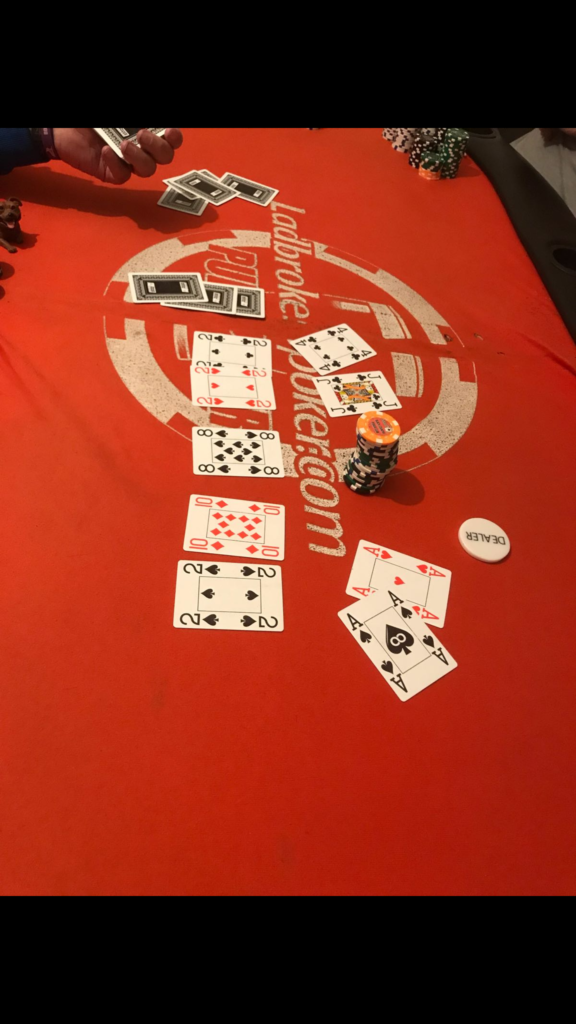 Down to 3 now and the Rat, I mean Bull was doing what he’d been doing best all night.  Arriving on the river.  His J’s vs H’s Q’s and yep, you’ve guessed it, a J on the river would put H in big trouble. 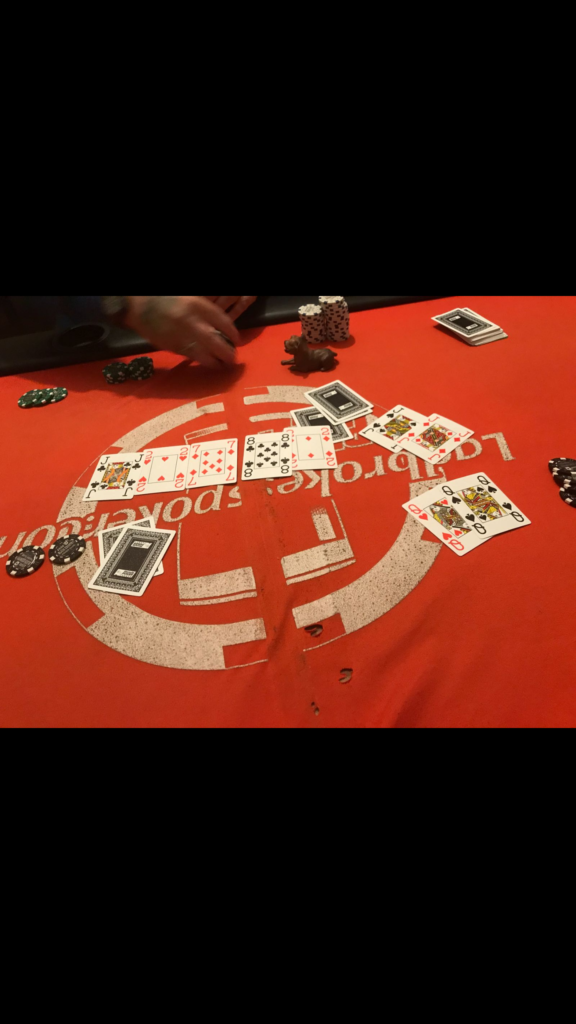 H tried to recover, but 30 minutes later he would be gone.  His 10/J up against K/Q.  No help on the board for either so the King kicker carried and H’s valiant effort would be over for this game. 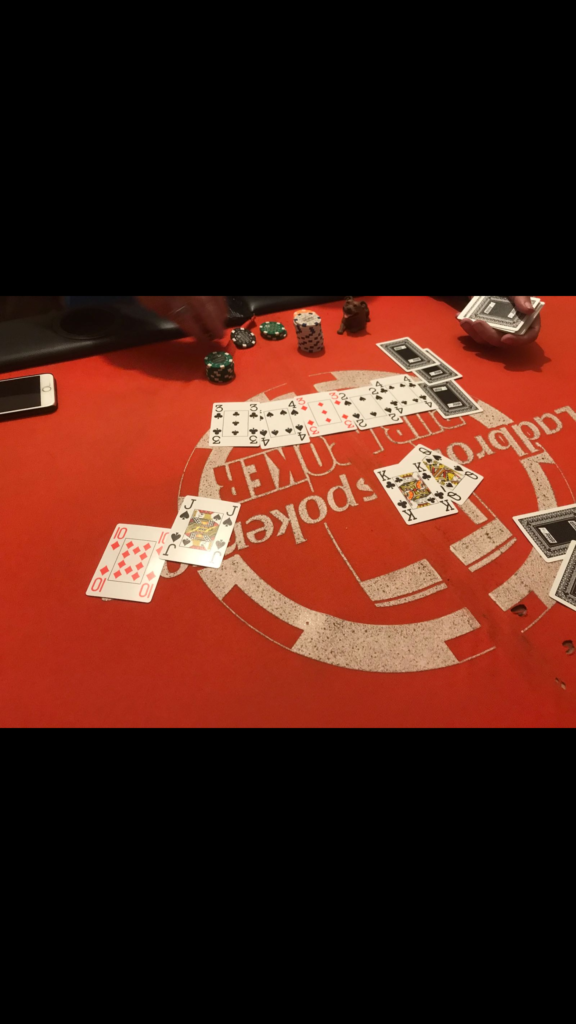 The heads up game would last just over 30 minutes pitting Liam against Steve and for once on the night Steve had appeared to get it in good.  His KK taking it down up against Pickering’s A/4.  A fantastic achievement and the Bull certainly managed to capitalise on the luck so full credit to him.  Big well done to Liam who put in a solid performance yet again.  He’s really turning in to some player here at the BCPC.

Steve had this to say on his win:

“I think I was a tad lucky to hit the river so many times it was unreal.  I might change my nickname to dirty river 😉 “ 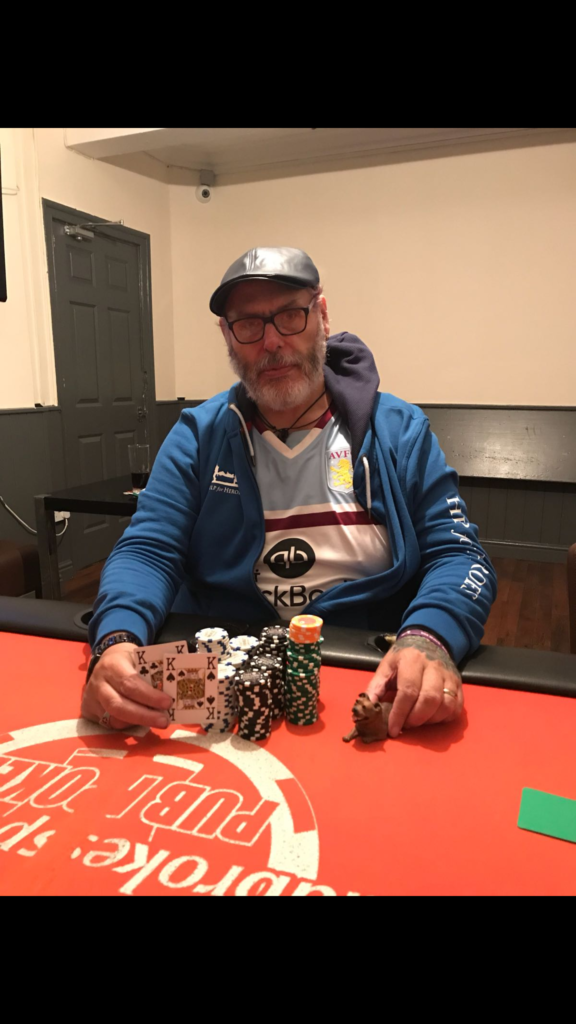 As it stands after game 5:

Time to ask our resident TV buff what’s on the box.  So without further a do… What’s on wood?