BCPC A victorious in Champions League clash against Nuts 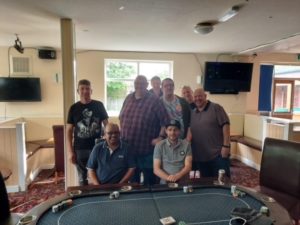 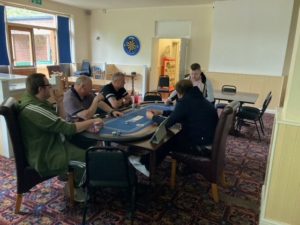 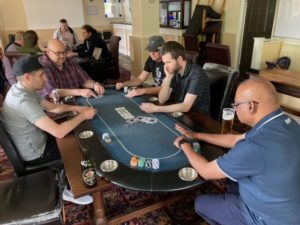 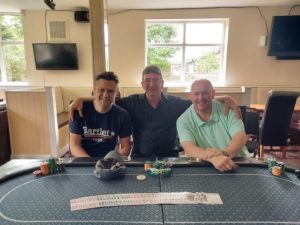 The biggest comp in BCPC history finally took place at long last, on Saturday May 7th, with 10 players actually seated to play for a $10,000 seat into the WSOP Main Event in July. Covid had forced us to push this back to 2021 and then again to 2022 and when we kicked off the game at 5pm, we were still £549 short of our target figure. We needn’t have worried, because by the time we reached the end of Level 6 when re-entries and add-ons ended, we had taken an extra £2000 on the day, which meant that we would also be able to pay smaller seats for 2nd and 3rd place.

Matt McKinlay was the big stack at the off with 86,900, while Tod Wood had 65,500 and Brian Yates52,000. Early additions included Adam Phelan(5000), Ricky Buckland(10,000), Hitendra Patel(3000) & Gareth Howard(15,500) and it was Gaz who made the early running when his set-over-set Vs Adam on Table 2 saw him over the 50k mark at the first break while Charles Mason was the winner on Table 1, improving his stack by over 20k to 46k.There were a couple of players who were sat out and Pete Carey became the first player out when his 1500 stack got blinded away.

Hitendra Patel then went in 11th as his KJ flopped 2 pair Vs Charles’ AK, only for the A to hit on the turn to counterfeit him. Tony Griffiths was the next to be blinded out which took us to the Final Table of 9. Ricky, having earlier added 10,000 chips, brought another 15000 before a big hand saw a double elimination as he and Charles were both seen off by Brian’s QQ. That was Ricky done for the day in 9th, but Charles re-entered with 25,000 chips to keep us 8 handed, with Tod also adding 25,000 more chips at the break.

Adam Phelan had fought back from his early losses but eventually exited in 8th place and this meant that Gaz Howard had now moved into the chip lead on 104k and on a 10d 6s 2s board, he put Matt McKinlay’s two black Kings at risk with 7s8s and the Qs on the turn saw Matt gone in 7th. Now holding 157k, Gaz had a third of the chips in play and was out for blood. But a 4-bet pre vs Brian went disastrously wrong as Bri flatted with JJ and then Gaz shoved the turn when checked to him on a J-3-3 flop, giving Bria massive double-up.

Charles then somehow survived with A-7 Vs KK when a 3rd K on the river gave him a chop but soon after he was gone and we were down to 6 players. Tom Cawley was the next to put Gaz to the test on a Qs 6c Ks flop when he put it all into the middle. Gaz dwelt before making a great call with 2nd pair (Qd 10h) vs Tom’s 3rd pair and nut-flush combo (As6s) and the board bricked and sent Tom to the rail. 4-handed and Tod says to Brian“ stacked, Gaz is stacked, Liam is you are stacked and I have this!” as he surveyed his short-stack. But on the last hand before the break, he was at risk with AQss vs the AJ of Gaz and doubled up to leave all 4 players pretty even.

Soon after the re-start though, Liam Pickering went All-In and Gaz tanked for ages before passing, losing a lot of chips in the process and soon after he called Tod’s 10-10 with Q-10 and didn’t improve and was gone in 4th, bubbling the seats. Tod then bossed the final stages of Day One to end with more than half the chips in play going into Day 2 on the Sunday.

He continued in that vein on Sunday but the first big confrontation came when Bri shoved As9s and doubled Liam(10-10) up. Bri then got it all-in again with AQ for 10bb but Tod’s 22 somehow held on a J-K-J-3 board as Bri missed his 16 outs before a 2 river sealed the deal, giving Bria $600 seat as a consolation prize. It was now Tod’s to lose and only a massive blow-up could cost him the coveted prize. Liam was getting no hands either and so when Tod put him all-in yet again, Liam made the crying call with 8-9. Tod had Ad2d and the board bricked to give WSOP Main Event seat!