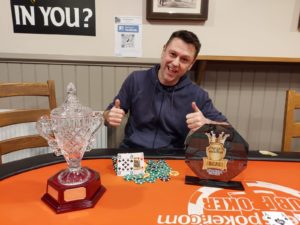 This proved to be a cracking night’s poker, as 14 players played for
the right to call themselves BCPC Champion Of Champions for
2022. By the break, all 14 were still in, with Season 24 Champion
WILL YOUNG leading the way, followed closely by MANDEEP
SINGH and ADAM PHELAN, with TOD WOOD the shortstack with
21BB’s.

We had reached Level 5 when TOD shoved AQ and NIC
RAWLINGS had him in trouble with AK…but 5 spades on board
gave us a chop. GAZ was the next all-in on the turn Vs NIC CROSS
& he rivered the straight to double-up nicely.

KEV BERRIE became the first casualty and was quickly followed
by CHARLES MASON. His Qs-Qc went up against NIC CROSS’S
9h-9d and with 5 hearts on board, NIC got lucky.

GAZ eliminated PLO Champion ANDRE CROSSFIELD in 12th
before WILL went in 11th to take us to the brink of the Final Table.
TOD was still short and looked in bad shape when his shove with
Kd 2d got called by NIC RAWLINGS’ A-8 but a K on the flop gave
TOD the desired Double-Up. The very next hand TOD shoved
K-high again, only this time it was into LEE MASON’S A-K…but
amazingly, a 9-river eliminated LEE and TOD was now chipped-up.

The Final Table quickly lost ADAM PHELAN (8-8 into JACK
WARBURTON’S AA) and STEVE HEALEY before GAZ shoved K-10
into MATT MCKINLAY’S A-K and failed to “Do a TOD!” JACK was
then eliminated by NIC CROSS in 6th before a short-stacked NIC
RAWLINGS ran Q-10 into the now dominant TOD’S Kings. 4 left
and MANDEEP’S shove with K-J held Vs NIC’S Q-J leaving NIC
crippled but when NIC shoved Ks-Qs he had TOD (10s-8s)
groaning….until he flopped 2 pair, leaving the last 3 in the money.
MANDEEP was a tiny stack and would surely finish 3rd…but on a
board of 8d-9c-7c, TOD (Kc-Jc) got it all-in behind vs MATT’s
Qc-8s. The 9d kept MATT ahead but the 10c on the river gave TOD
a monster stack.

The Heads-Up only lasted 4 hands, with TOD playing a flopped trip
eights superbly, allowing MANDEEP’S A-K to seemingly catch up
with a K on the river and the resultant shove made TOD the first
ever Champion Of Champions, his 19th BCPC Title.