BCPC Season 18, Game 4 – Friday 11 August 2017 After a strong outing from many of the BCPC faithful at this year’s Goliath event at the Ricoh arena; players were in fine form with intertwined poker brains ready to tackle game 4 of season 18.  It was looking very close at the top with Nic and Adam almost neck and neck and a few snapping at the heels just slightly in the distance.  Would Nic hold his nerve?  Would Phelan flourish or could Ricky BUCK the trend with back to back wins?

Early on: Steve Healey’s was almost taken out as his King Jack hits two pair, but Ricky manages to get a nice chunk of chips with his set of 8’s. A credit to Adelaide Bull for managing to do some damage limitation with that hand.

Ricky again got involved in a big pot, this time with Claire and Matt.  Preflop raise to 600 with a flop of 9 9 J.  A bet on every street with 3 callers and Claire takes it with trip 9’s.

On another table Chris and Liam in a hand, lots of betting. On the river the board is something like 257JK. Liam puts biggish bet in. Chris dwells for a while then calls. “Good call,” sighs Liam, and shows something like 67. Chris mucks.

Tony T had some battles with Gaz. One of the strangest was when, after the flop, Tony bet 600, Gaz called and Tony mucked. “I thought he’d raised.” Awkward!

After a decent start it was week 3 winner Ricky who bit the bullet first courtesy of Marc Ward, Ricky’s Ace Jack just not holding up against Marc’s Queen 9. 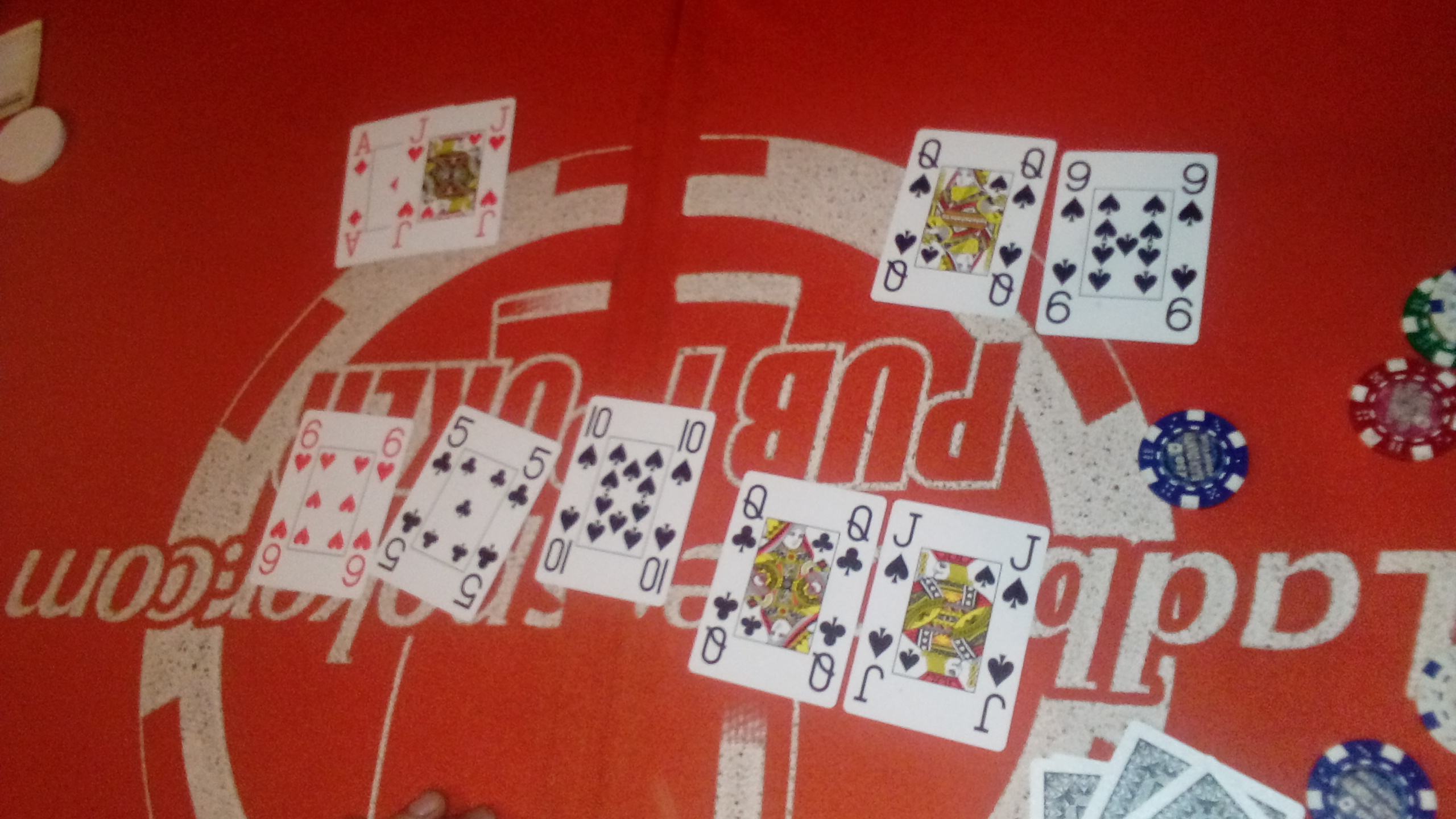 Tony T then went out shoving over the top of Gaz’s button raise with JK. In Tony’s words: “But Fuckface here has AK! Wtf!”

The Ace King curse was order of the night with Mat min betting his pocket 2’s and Brian re raising preflop.  Matt calls and flop comes 7/9/Q.  Brian first to act bets 1000.  Matt senses a missed Ace King and reraises all in.  Brian thinks about it and Matt thinks he’s good, until Brian calls!  Luckily for Matt Brian pot committed and the turn and river both throw blanks seeing Brian exit with the Ace King. 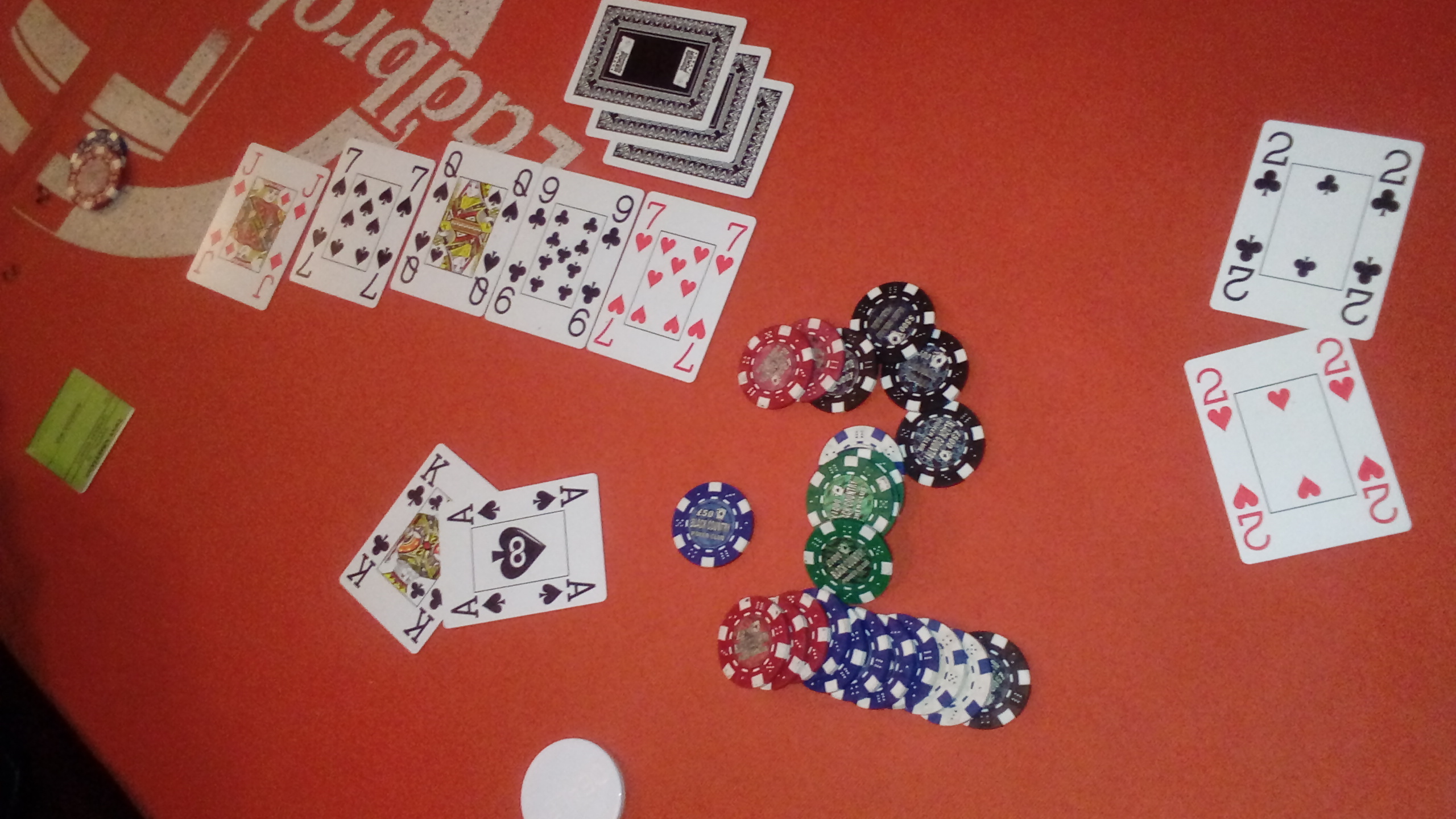 The very next hand Tony Griffiths goes all in, his Queen 10 no good against the single pocket Jacks caller

Marc was having a solid game, his next victim being Simon Smith.  Simon’s pocket 9’s not match for Marc’s Queens and more chips to add to a solid game.

Gaz Howard took the high hand of the evening getting involved in a pot with Matt Cromwell heads up.  Flop comes 10/8/9.  Matt bets, Gaz reraises, Matt pushes all in and a snap call by Gaz.  Matt shows two pair, but has open ending straight flushing you name it he has it.  A king of hearts on the turn seals the flush whilst the Queen of hearts on the river seals the high hand.  Nice! 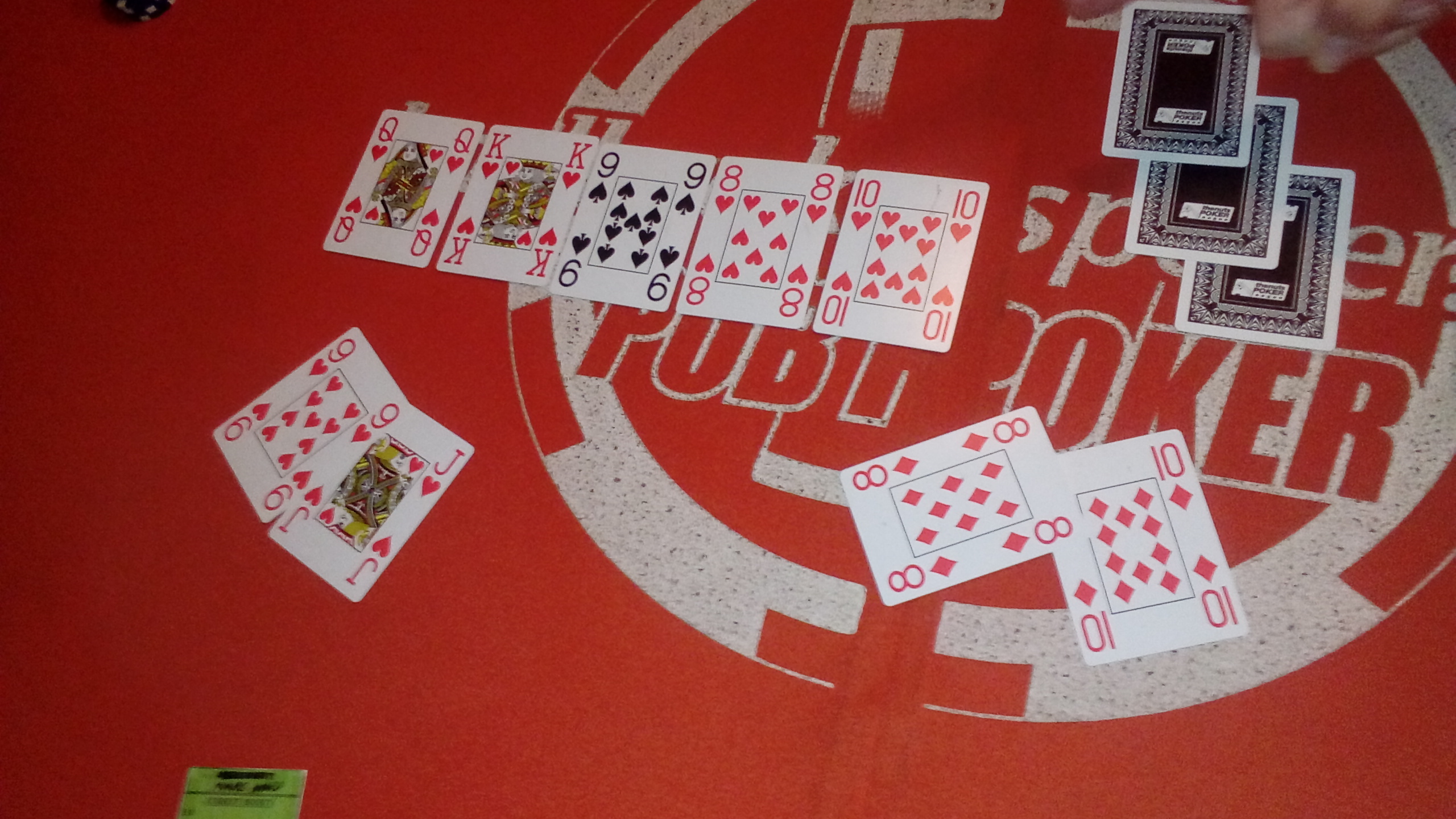 Gaz had a period of doubling everyone up on the table:

But then he went on a bit of a rampage…

Gaz raises with 9T, Claire shoves with A8, Steve reshoves with AJ, Gaz makes the big call against both. The board came down 7K2….3….T. And we lost Steve and Claire in 9th and 8th.

Thr next hand, Tom shoved with A5 and Gaz woke up with AQ and reshoved. Adam wailed “Oh FFS!”. Anyway Adam did fold and we went to the flop. The Q hit I think and Tom was dead on the turn.

Gaz open shoved again with J9 and Nic who was short in the BB called with 85. Gaz hit first his jack and then a flush, sending Nic to the rail.

Then Mark E shoves with A2 in the SB only for Gaz to look down at A8, which held (hitting the 8).

A big hand next. Tod was first to act and was deligted to see he had KK, and opened for 3k. Gaz called, Marc Ward went all in with his small-medium stack, Tod reshoved and Gaz went, come on then, let’s do this now and knock both you fuckers out! (or words to that effect, lol), and showed 8sTs with his call. Marc had Tc5c and it was a really boring board in the end and the kings held easily.

Tod then raised Adam’s BB and he went all in with A7. Tod called with KT and board went something like 268…7…9. Unlucky Adam.

Tod and Gaz were then pretty even with Tod having the slight chip advantage. We had a few hands back and forth but it didn’t take too long for their 45BB stacks to get it in: 99 for Gaz v JK for Tod – a king on the flop and no help for Gaz saw Tod win. I think that means his ranking will improve from 20th which Tony T might have mentioned just once or twice on the night……

It was a 12am finish which (apart from maybe that first season) is the earliest finish we’ve ever had!

The hand of Tod! 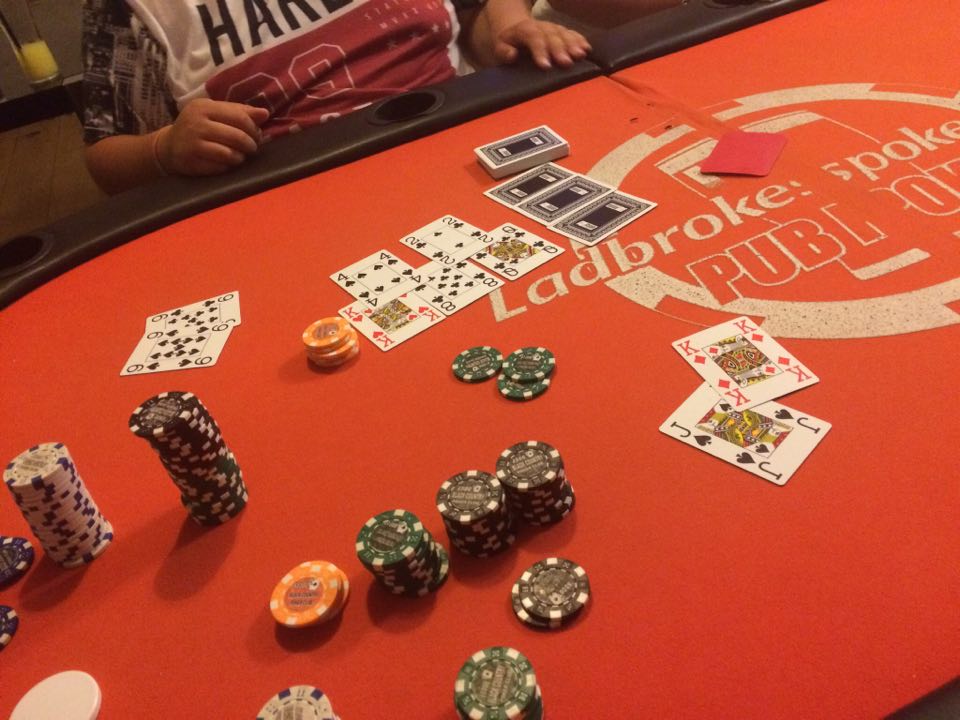 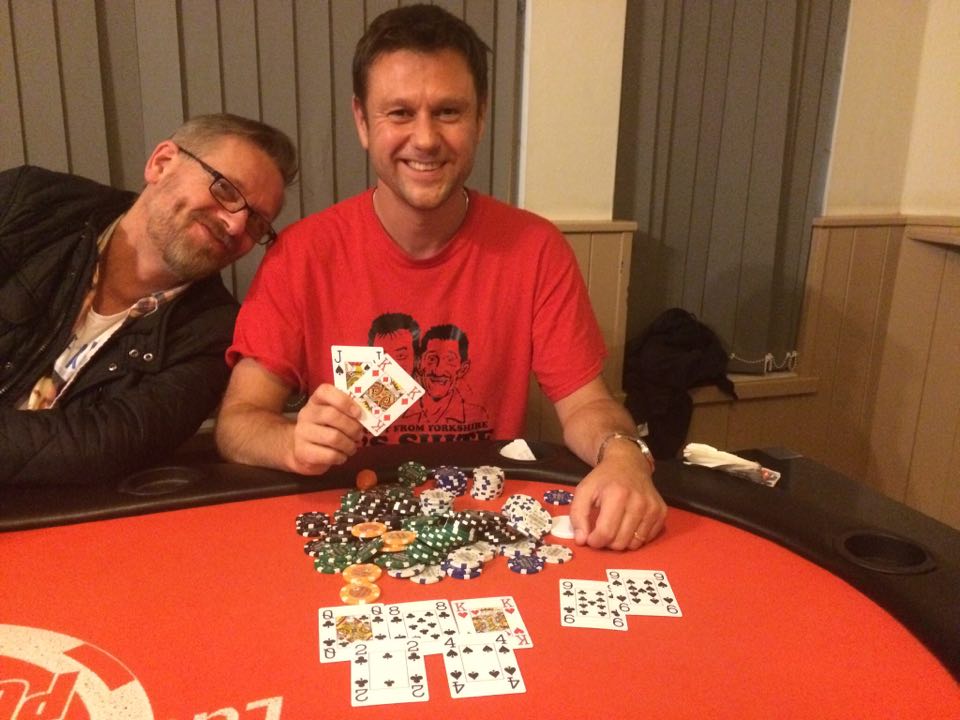 As it stands after game 4…

After the last league game blog no one noticed that “out with the father” was in fact not what Tod was watching, he was in fact just out with his Father quite literally.  So this week is reserved for Tod’s choice of from last game and has to be Game of Thrones!

Remember to check out the calendar of upcoming games and events. Don’t forget the heads up competition is this Friday on the 18th August. If you’re new to the club, have a look around the website. If you have any comments, please let me know.