With only 2 weeks after the first game of the season, the BCPC lot were back again at the New Talbot for more poker fun.  What with only 4 and a half weeks until Xmas (and just 3 sleeps for insomniacs,) the 2nd game was set to take place a little quicker than usual to allow a break throughout the December period in addition to giving the pub a little poker breather as 2017 draws to a close.  Cawley had taken his first win last week and would be looking to push on from his promising start whilst the rest of the pack would be looking to push on in their quest for points going in to the 2nd game.  Tonight would also see the introduction of the Button pays the ante test which hopefully would look to speed up the game going forward.  The tables were prepared,  chips were counted and set up (then subsequently knocked over) the chips were counted and set up again and the action would commence!

28 players would sit down for tonight’s game, a cracking turnout that would ensure a bumper action packed evening.  It only took one hand to kick off.  Paul Foy holding J 10 flops a straight with the 8-9-Q board.  He bets and is called by Amy.  J on the turn and Foy fires another bullet and is met by a call.  The river pops up a J.  Coshan this time leads out for an all in and Foy folds correctly to the higher straight with Amy holding the King.  A very unlucky run out for Foy and a dent in the stack he could have done without.

Not content with the first hand of the evening; Foy again gets involved in the 2nd for good measure.  This time getting in to a hand with Brian Yates who raises on the flop.  Foy reraises and gets called by Brian.  Unlucky for Foy’s Q10/dd as he misses his Flush draw with two cards to go, fortunately however he hits his gut shot on the river and takes down the pot to survive longer than 5 minutes leaving Brian’s 2 pair massively behind.  Unlucky Brian! 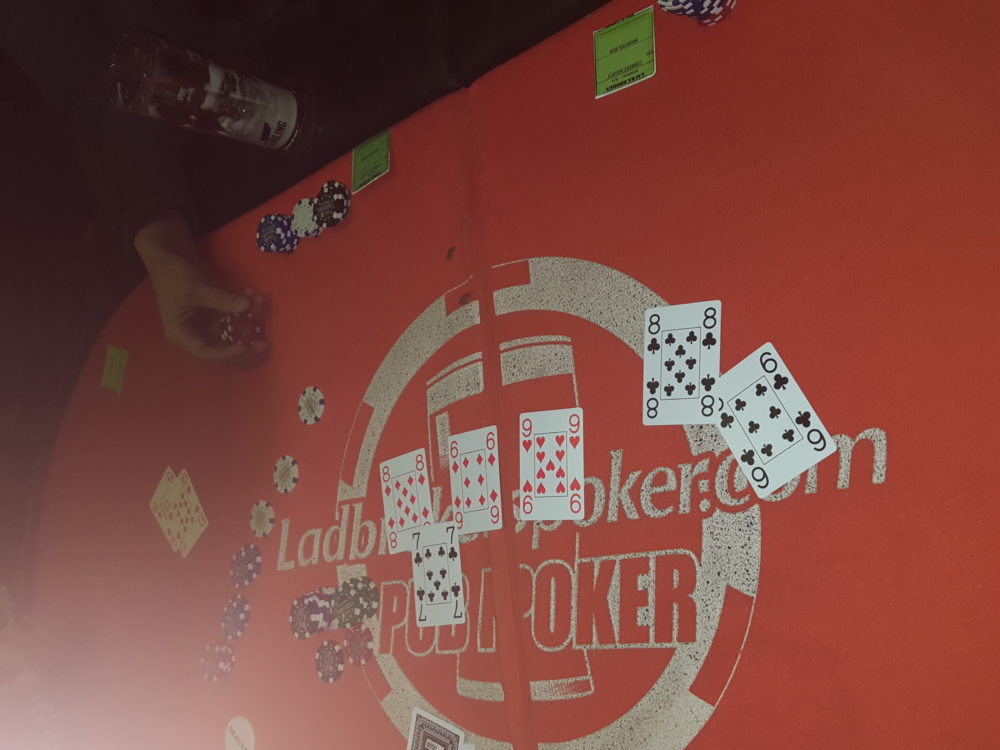 Cromwell started well picking up A/J spades and 3x’s preflop.  2 callers come along and the flop drops down J J X  All checked round and a Queen on the turn, Cromwell bets and receives a call.  With a 6 on the river Cromwell bets again and calls with the other J unfortunately however with the 5 kicker and Matt picks up a nice early stack.

Not content wit hthis Cromwell then picks up A/10 spades and 4x’s.  Chris Baker comes along for the flop which drops two spades.  Cromwell bets and receives a call from Chris.  The turn arrives and no spade leave Baker to lead out for a whopping 650 with the blinds still on 25/50.  Cromwell deliberates, calls and makes the flush on river.  Cromwell manages to put in a 850 bet that is called by Baker and that would ensure even more chips early on for Cromwell.

At 20:15. this was happening on another table submitted by game 1’s winner Tom Cawley.   King Jack beating King 9 with a higher 2 pair.  Not quite sure who was involved though!  Cheers Tom 🙂 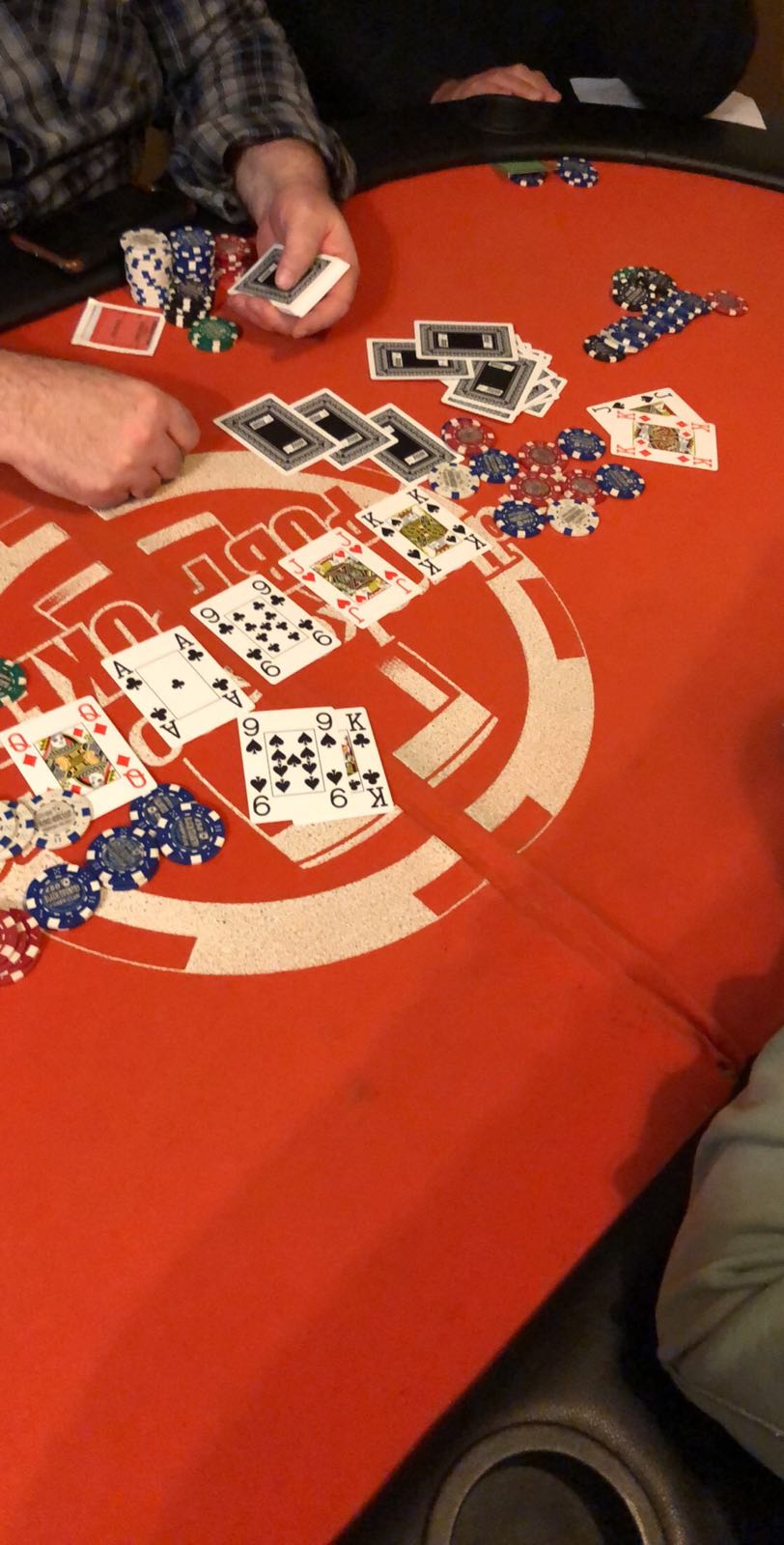 By 20:30 Brian was still short due to Foy’s made straight earlier on and shoves preflop with his Ace King.  Cromwell had picked up pocket 10’s and decides to call incidentally along with Foy leaving the 2 to battle it out post flop.  With a flop of 5/7/4 and Cromwell protecting his 10’s he shoves leaving Brian and Matt to see the final 2 cards.  A King on the river would mean a treble up for Yates and incidentally Foy would have hit a straight with his pocket 6’s, ouch! 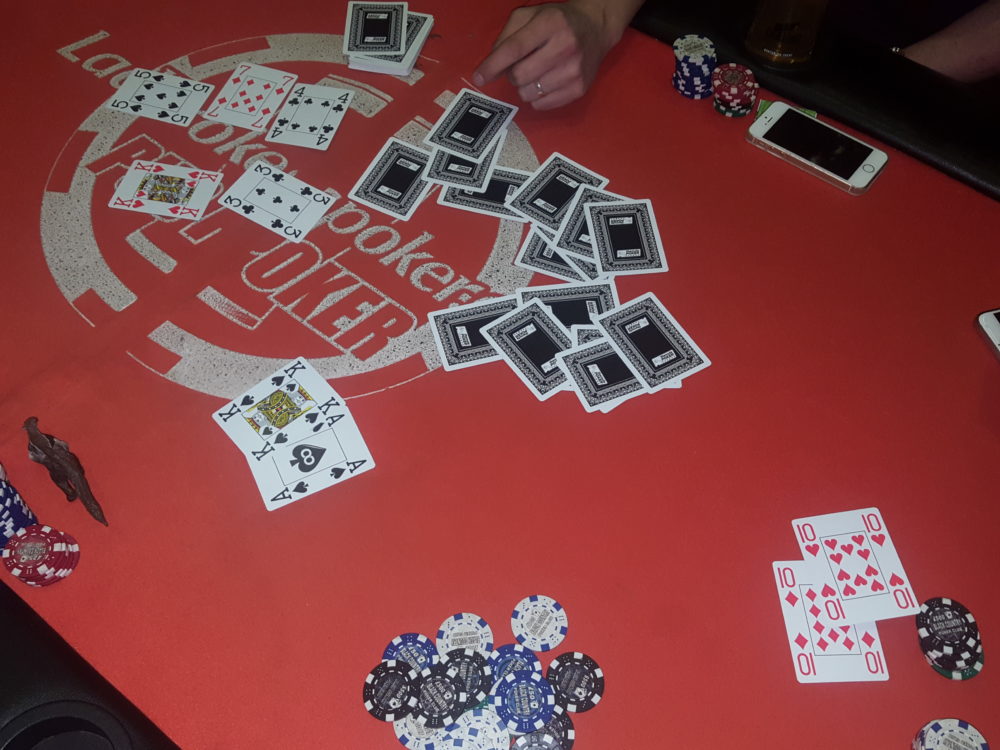 Claire Bailey was doing what she does best and hitting sets and this would result in the end of the game for Tony Trippier.  Trippier looked to be in great shape preflop with pocket 6’s to Bailey’s pocket 3’s, but Bailey doing what she does best found a 3 to leave Tony walking.  Coincidentally Phelan had folded pocket 9’s preflop and would have beaten both players hitting a set himself! 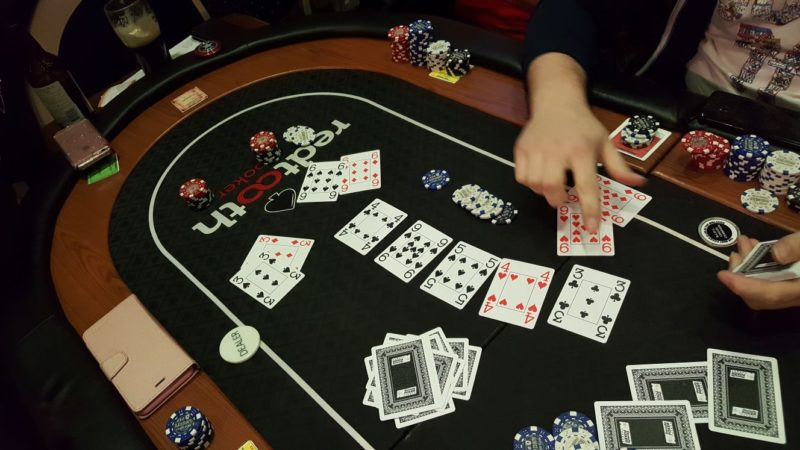 Lee Mason was gone in 23rd position courtesy of Tom Cawley and a couple of pocket rockets.  A 10 on the flop gave Lee a glimmer of hope, but in the end the Aces were just too strong. 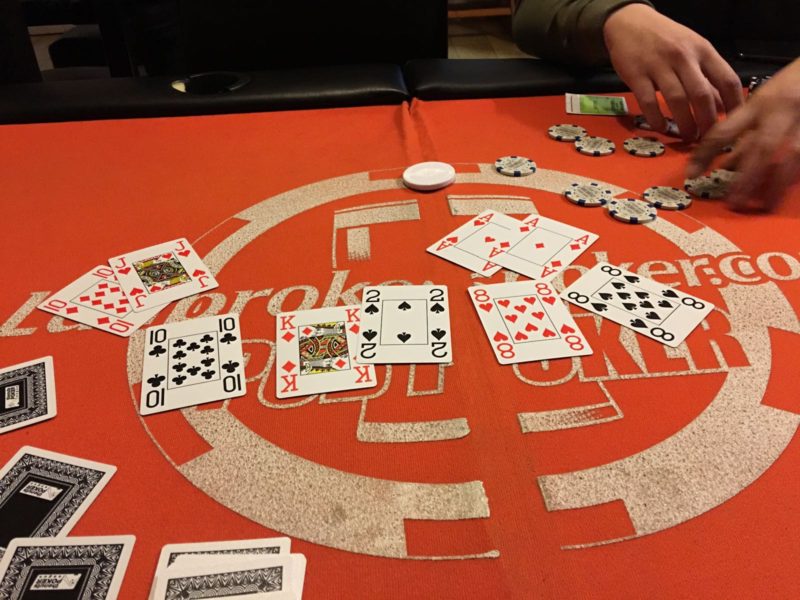 Ricky would leave us in 17th position after getting his chips all in on the flop with his pocket 7’s on a A 2 3 board probably representing the Ace, unfortunately for Buckland however Foy had managed to hit with his set of 2’s.  Come the turn 6 diamonds was so that left Ricky needing a 7 to save him.  Unfortunately it never arrived and Ricky was gone.

Meanwhile Gaz Howard was dealing monster hands like the one below: 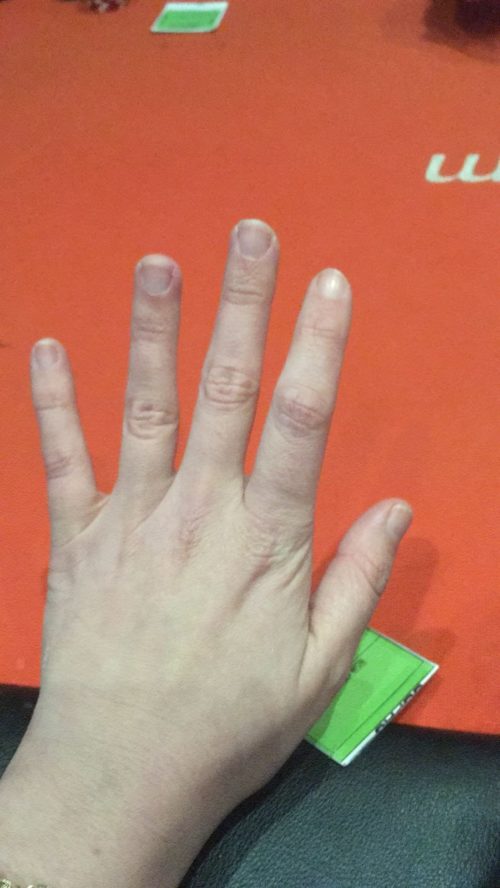 Sorry not that one, this one… 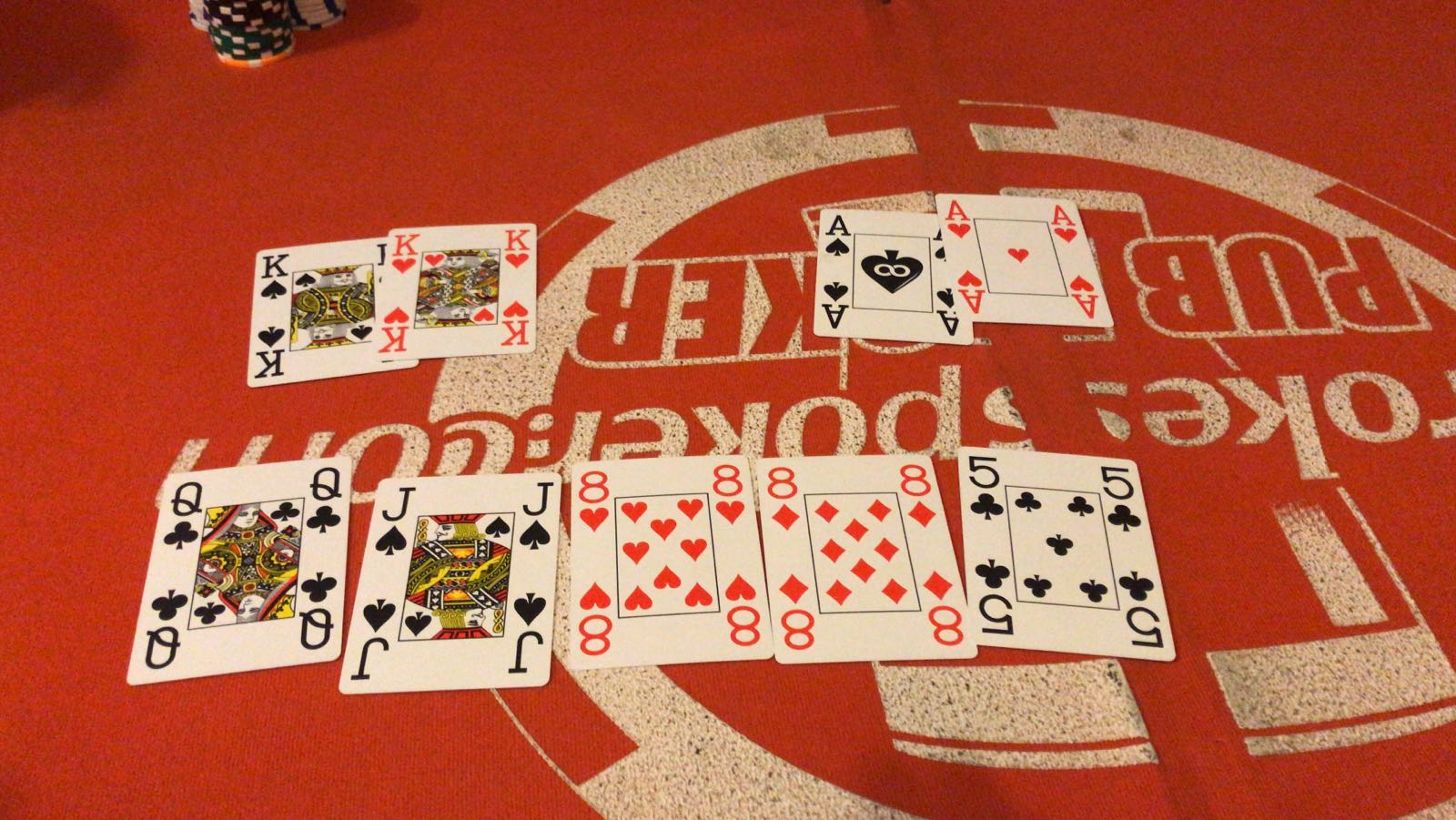 Mark England would be pleased after feeling a little hard done by getting his Aces in vs Claire Bailey.  Bailey looked to be sending Mark home after hitting two pair come the turn with her K 10, however the 7 dropped on the river to pair the board meaning Mark would sit a little longer and take a double up for his efforts. 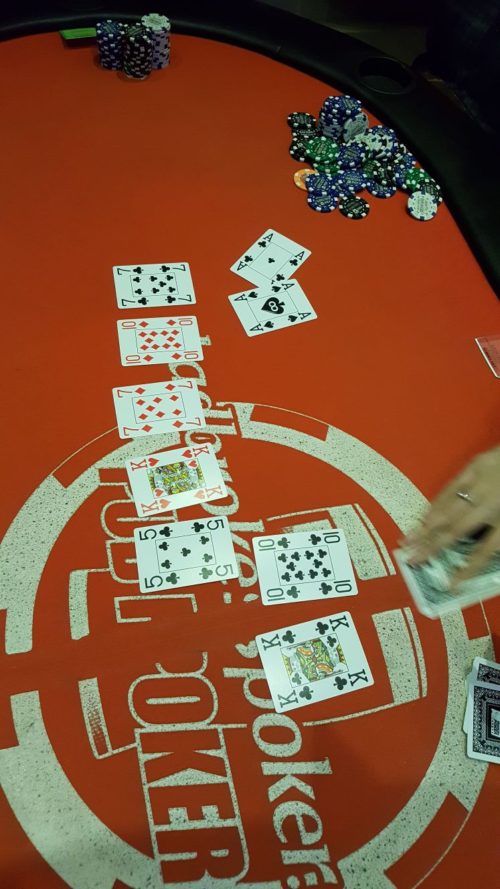 Tom Cawley by this point had amassed a massive stack as chip leader and was bidding to become on the 3rd person to win back to back games in the history of the BCPC and the 1st to win games 1 and 2.  Could he do it?

Jake Poxon can count himself unlucky after some great efforts over the last 2 games.  Out in 9th to Tom Cawley in the baddest of ways.  Hits trips and gets rivered to a straight.  This live thing is rigged Cawley, you said it first! 😉 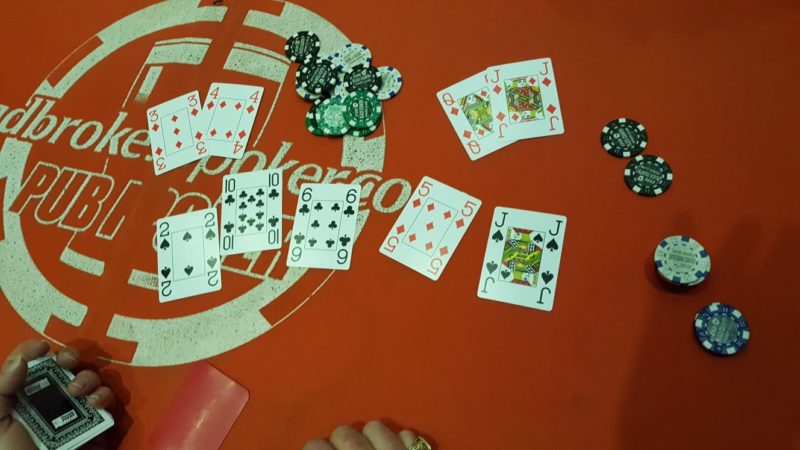 Laura and Amy would be next to exit the final table in 8th and 7th respectively.  Amy can count herself slightly unlucky.  Well 69.56% to be exact after being taken out by Brian’s A/Q when holding A/K.  Unlucky Amy!

Another wow hand involving i’m not sure sent in to the group via Cawley.  A/Q vs Q/Q with the Ace arriving late on the river! 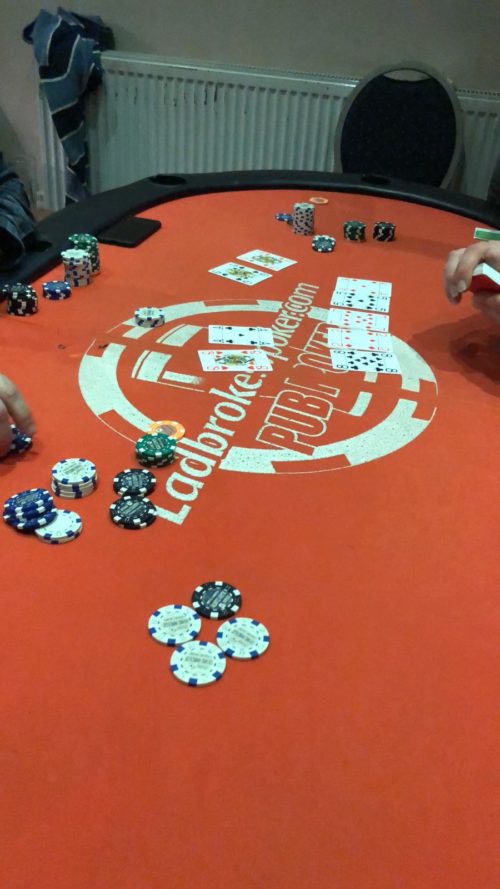 Adam Smith was making the most of his return to the BCPC with a nice 29k pot against Brian hitting the river.  With Brian now short stacked he made a move in the next hand shoving with K/8 and finds a call in Mark England’s A/10.  K-J-X on the flop putting Brian in great shape, but just to make sure Brian was allowed a K on the turn.  Not quite content with this another one was awarded for services to BCPC on the river and giving Yate’s quad Kings and some more time at the final table.

Yates would manage to donate some of these chips to Smith a few minutes later leaving Brian kickered!  After both limping the pot, Brian and Adam would hit trip 10’s, but with Smithy’s Q playing it would cost Yates. 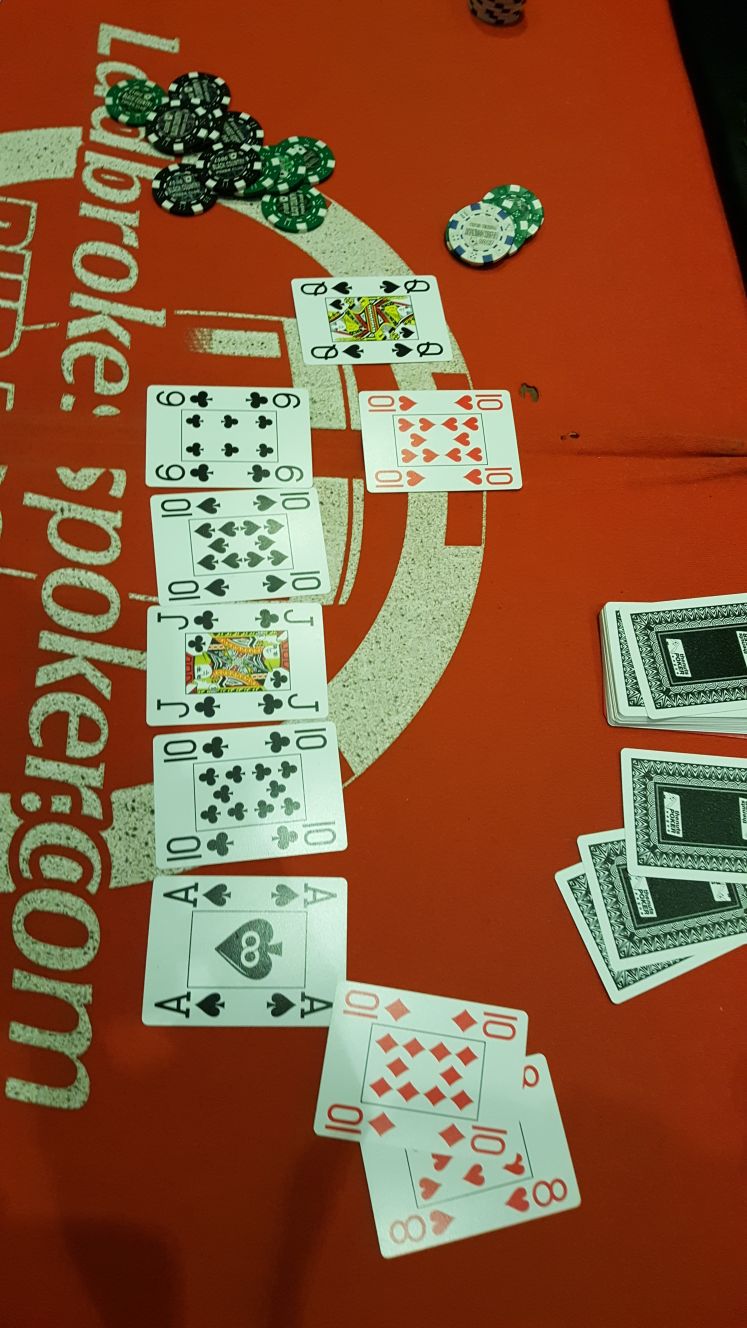 Foy would be next to leave in 6th courtesy of Adam who trapped Foy with his Kings, well played! 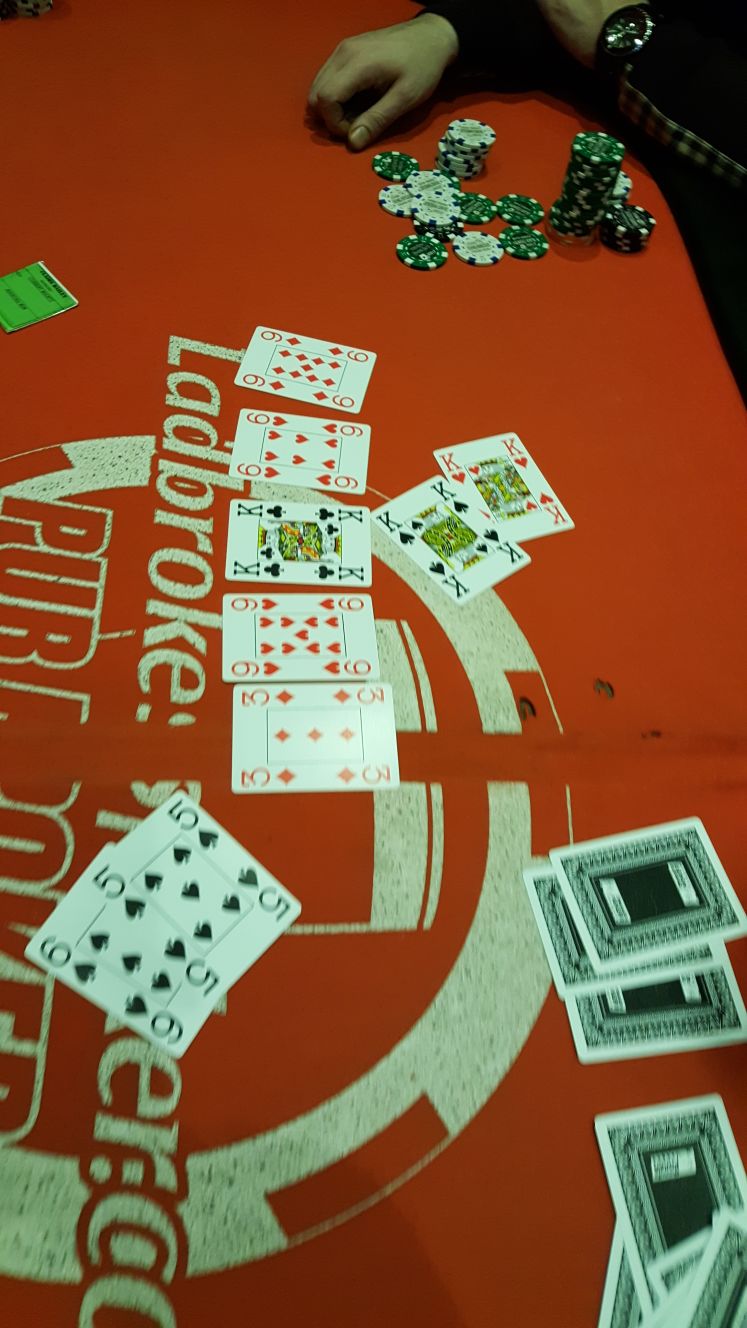 By now Cawley was pushing ever so closer to the double.  His cause was helped with the exit of short stack Brian in 5th and followed by Claire Bailey who managed to cash £28 for her efforts.

It was always going to be tough for England after having a comparatively smaller stack compared to counterparts Smith and Cawley.  He got his chips in right, but unfortunately poker being, well, poker gave him a cruel exit and a picture tells a 1000 words. Very unlucky Mark and well played. 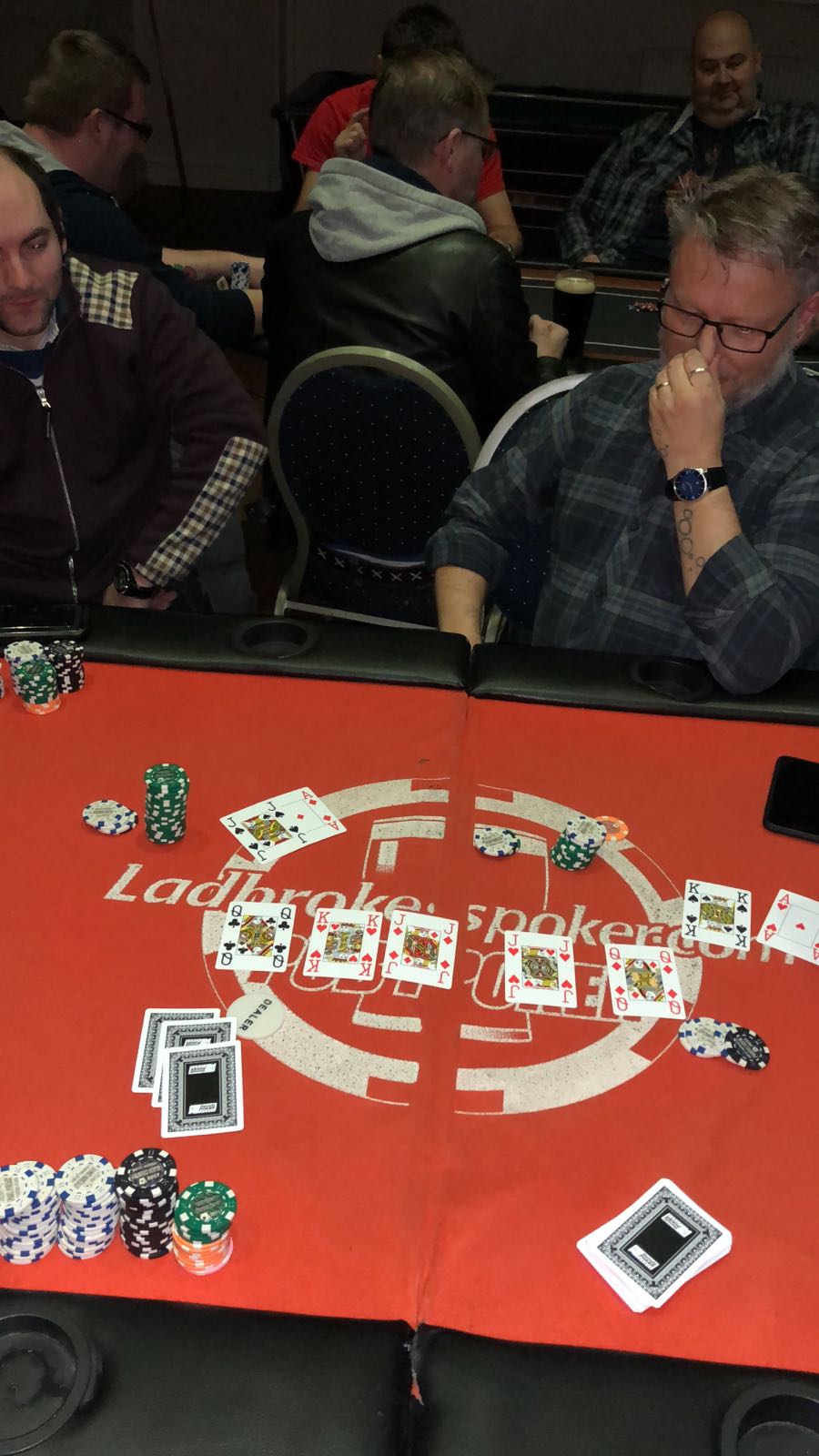 That would leave Smithy on a great return to the club after becoming a Dad to do battle with Tom who was looking to become the first game 1 and 2 back to back winner and guess what?!  He only went and done it  !!!

Cawley had this to say on the night’s win.  “Not all heroes wear capes” and it certainly looks that way!  Fantastic achievement and it’s really pushed Tom in to a great position for the rest of the season.  Very well played sir! 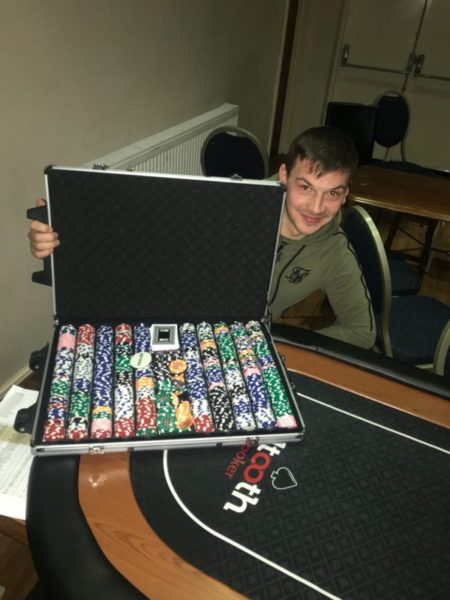 As it stands after game 2

“We’ve just caught up with The Handmaid’s Tale- excellent.  New season starts I April and still re-watching Curb your Enthusiasm before I watch the new season.  So, so good!”

Well that’s Tod’s pick of the telly for you lot, cheers Tod!

Next league game Friday 12th January 2018.  Wishing everybody a very Merry Christmas and a Happy New Year until the next game.  I hope your holidays are the NUTS!