Game 2 was upon us after a cracking first game that saw our first ever use of an alternate which just shows how popular and the growth of the BCPC, hoorah!  Could Cromwell extend on his win from game 1 or would it be another player’s turn to occupy the top spot, we should soon find out!

26 players made it for the second game which appeared to be an achievement in itself.  Players were dropping out left, right and centre due to unforeseen circumstances which meant that the alternate list went out the window.  It did however provide a great

All quiet on the update front for about 45 minutes, apart from the first hand where Bri was all in.  He took it down on a very wet board, but refused to say what he had.  boo! The next bit of action would see two all ins.  Nic Rawlings pushing it in and finding a call in Brian.  AK Vs AK stalemate with no nasty surprises.  Phew on both accounts!  Nye’s table would see their first all in not until 21:00 by Dan Ryder, Laura folded however.

Courtney was taking the opportunity to work on his dealing skills, but unfortunately was struggling with multitasking.,  He deals the cards, and ends up heads up against Yates.  The flop comes and first to act Courtney checks, Bri bets and Courtney tries to call.  In the mayhem however it appeared that he’d mucked his own cards whilst dealing, doh!  The card guard Churchill finding his way to the naughty corner.  He tries to find them, can’t and the look of sorrow is clear to see LOLz. 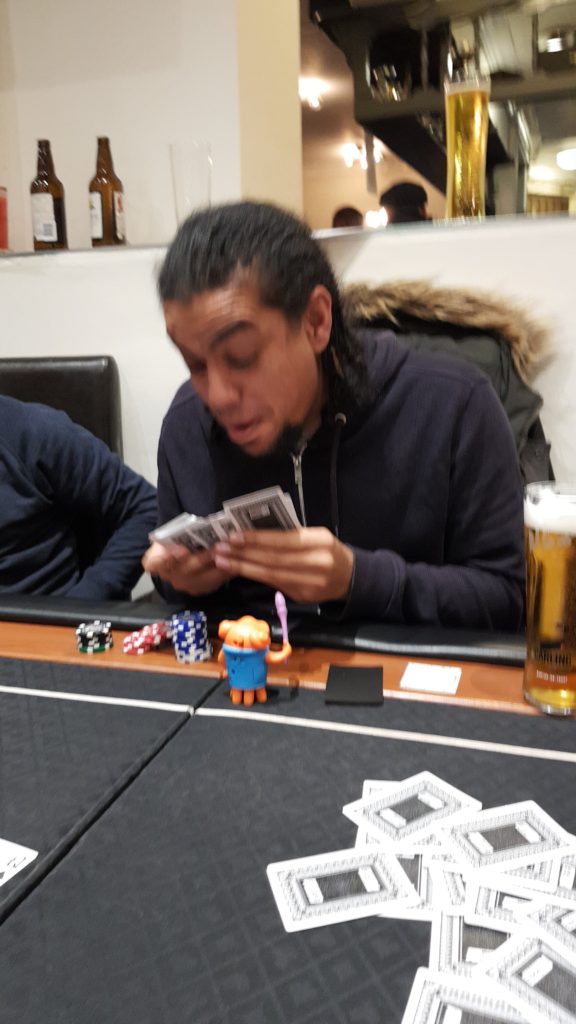 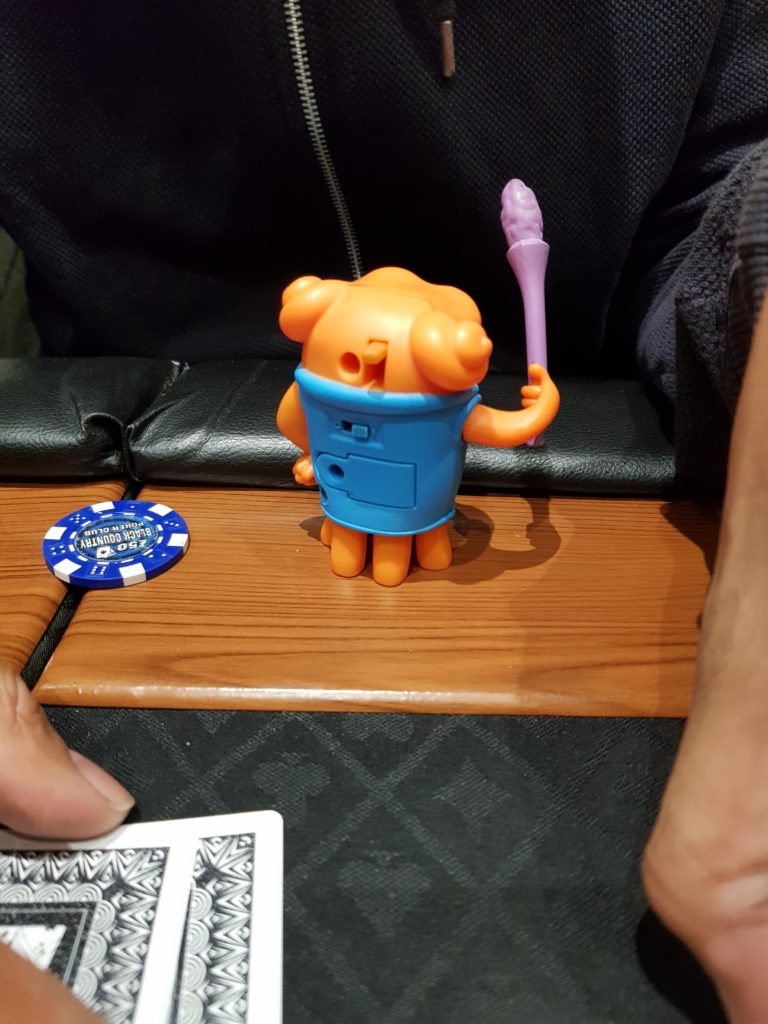 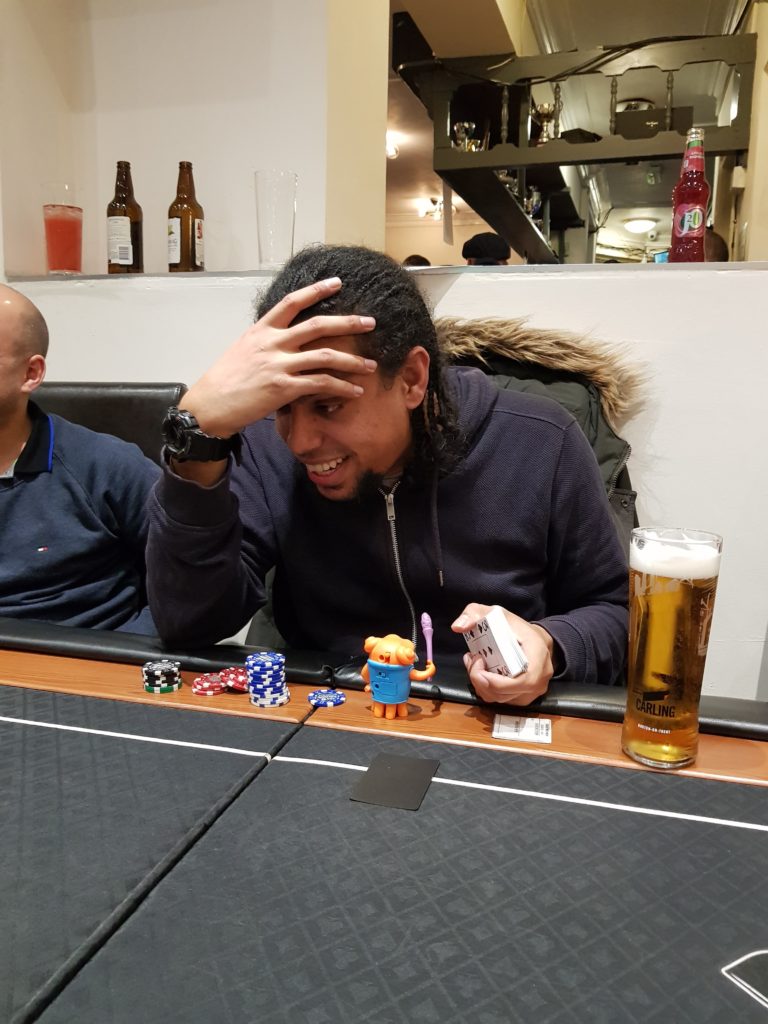 Liam was down to 375;  His J9 vs AJ on a J-10-8 flop.  Open ender with flush draw.  Not to be for Pickering as it went brick brick.  First blood of the evening came out blue and would be that of Mark England.  Mark will be the proud owner of the shirt of shame for week 3’s match.  Unlucky Mark.

Gaz would leave the fold after getting it his A/7 all in vs the A/K of Nic Rawlings.  Steve Healey mucked pocket 7’s after several reraises, but would have taken home the bacon (or quorn) whatever.

Quick break and back in to action;

Matt McKinlay would be next to leave before Courtney gets it all in on the flop against Healey’s KQ.  A double up for Steve ensued as he hit the straight which was higher than Courtney’s.  Unlucky!

Tod would be getting involved against Marc Ward next.  He raises 1500 pre and ends up going all in against Marc’s K/Q  A river Jack would just seal it further and he doubles up to 4300.

H would leave us next shortly followed by Steve Healey.  Full house over full house, unlucky Steve AAAJJ not good enough against AAAQQ

Players seemed to be dropping thick and fast and Courtney would go next.  His A/7 slight favourite properly stuffed by Nic’s full house with an Ace on the board too, ouch!

Mr. Trippier the short stack manages to survive an all in pre shove with 6/7 against Yate’s A/5 with a rivered 7.  How important would that be?

Another underdog also getting there.  Dan Ryder can’t have been happy seeing Berry flip over one of his 9’s with A/9 vs Ryder’s 9/10ss:  However there was a twist to the tale.  two spades on the flop and it was all sealed come the turn.  Nice hand sir!

Tony T was at it again.  An all in shove with KJ would see him slight underdog vs Amy’s 10’s but would you believe it?!  The river rat strikes and Tony takes out Amy as the final table drew ever closer.

Tony the master slayer not content with Amy’s scalp would follow it up taking Ryder out.  Dan gets it in good, but Trippier hits trip Jacks!

Rhoden would be out next leaving 11.

Cawley gets it in with pocket 5’s and finds a caller in Ty Godwin who has pocket 3’s.  No board help and Cawley doubles up.

Cromwell has a mini fist bump as he looks down at pocket Queens and raises to 1k.  Finds a caller in Bri and flop comes AAQ.  Cromwell checks followed by Brian, Turn 10, both players check and a Jack on the river now means any Ace or King will probably hang Brian.  Matt bets another 1k but Brian folds, damnit!

Nye would conclude the last player but one to exit before the final table after going all in pre vs Trippier.

Cawley leave us in 10th place; his 6/7hh not helped on board and Trippier’s K would carry for a point and 10th place.

It all goes in pre.  Slightly shorter stack Bri has pocket Queens and it’s in against Ty Godwin’s pocket 8’s.  Ty’s alive, but only just.

Not long after and Ty Godwin has gone in 9th, courtesy of Cromwell for the 2nd time in as many games.  Pocket 10’s of Cromwell against Ty Godwin’s 10/J , but straight possibilities made it a bit of a sweat!

Rich Hughes on his 2nd consecutive final table would leave in 7th.  His all in pre with pocket Jacks called by Phelan’s A/9.  Hughes predicted it and out it came… an Ace.  Well played Rich.

Phelan was having a Phield day on the final table.  His next victim?  Nic Rawlings in 6th place.  Nic’s pocket 6’s up against Phelan’s A/10 and the straight comes courtesy of the river.  Well played Nic.

By 1am Tod was shoving with K/3.  Tony getting a bit irate after a few moves made by Tod goes you can’t have it every time and calls him with A/7.  An Ace (and a 7) drop on the flop and it was goodnight Vienna for Tod out in 5th.

Just before the 2am mark, Phelan who’d done so well taking out final tablers managed to find himself leaving in 3rd himself.  Well played!

Heads up and it was Brian hoping to push on with his 4th place finish in game 1 vs Tony Trippier who had an air of patience about him all evening.  It started well for Tony courtesy of a double up, nice!

In what appeared to be an eon of over an hour this may very well have been the longest heads up in the history of the BCPC. Trippier was riding his luck on more than one occasion; An example being the below rivered straight for the split which would have given victory to Brian.

They say when your luck’s in, your luck’s in and Tony was definitely taking advantage of that; Much to the dismay of Yates.  So much so he amalgamated an impressive run of getting it in bad on 4 occasions, whilst winning 3 and splitting the one mentioned above.  It must have been written in the stars as it appeared there would only be one winner of this evening’s events as the Poker Gods doth bestowed their fortune on his very head.  The final hand would select Trippier’s 6/7 to receivethe gratuitous prize of a straight and elect Yates for this week’s runner up position.  Well played Tony and unlucky Brian!

Tony had this to say on his win:

“Currently watching Zapped series 3 on Dave.  It’s daft, but I love it.  Just finished The Heist on Sky/Now TV- Pretty addictive in the end.  Next thing is probably Homecoming on Amazon, which I’ve heard fantastic things about.  Aaagh too much good TV!!”