After a long wait the penultimate game had finally arrived.  This would separate the men from the boys, the women from the girls and the poker players from the degenerates.  Which players would be picking up the seats and which players would be picking up the tab.  Not long and we would soon have our answer as 22 players took on the challenge to try and improve their positions.  Tod would be looking for a third unprecedented title, but would face stiff competition from Adelaide, H and Liam in their quest for top spot.  Who would triumph in the battle of adversity?  There was only one way to find out!

The first congratulations of the evening had to go to Cawley for ensuring safe logistical transport for the BCPC trophy.  Hats off to you sir! 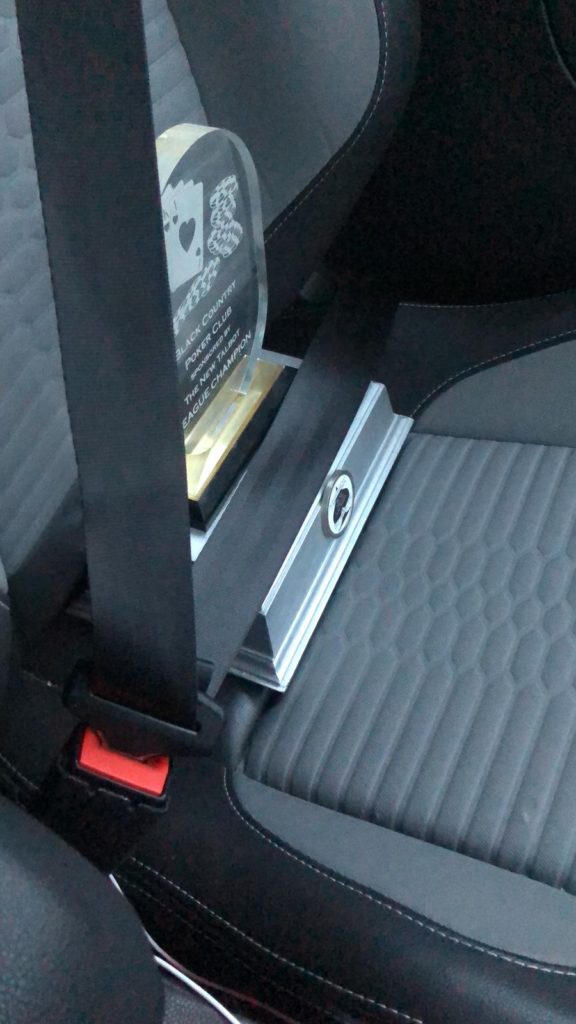 Brian the Chairman Yates thought it a funny idea to place 1st, 2nd and 3rd next to each other; subsequently blaming the seat draw.  Oh how they laughed!  (Well, 2 outta 3 ain’t bad)

Fairly quiet to begin with, but it appeared that Steve Healey may have had something to smile about finally after doing over Trev on multiple occasions.  His latest accomplishment being full house over top set.  Nice hand Steve, unlucky Trev!

Matt McKinley was getting A LOT of luck going his way;  Gaz made it 500 after 3 limpers and finds 2 callers in Charles & Matt.  Adam Phelan decides to raise up to 2100 and Gaz proceeds to shove.  Charles gets out of the way with KJ whilst Matt says “Do I gamble?”  He decides to and reshoves.  Phelan calls and we see AK vs AA vs 86dd.  Look out for the little Diamonds on the board and that explains that one, ouch!

Matt was continuing his run of good fortune;  This time with a hand worthy of a call and Mr. Mason only asked for the call!  Ask and thou shalt receive.  Mason obviously very happy as can be seen below…

Smithy would exit us in 16th position, duly followed by Claire and Brian in the same hand against Liam (A dark horse contender to take the title)  This would do himself the world of good in his attempt to challenge Tod, Steve and H in an unlikely pip to 1st position.

Brian had left himself on fumes in the previous hand after shoving over the top of Dan Ryder’s raise.  Dan duly called with pocket Jacks which managed to hold against Brian’s A/Q.  Phelan incidentally had folded the other pocket Jacks preflop giving Bri a little extra help, but on this occasion it wasn’t to be.

Very quiet on updates for an hour and before we know it we were down to 14.  Blinds were up to 150/300 and next up was a battle of 2 of the lads gunning for first position.  This particular hand would see H up against Tod.  AHA! Check out my pocket Jacks! H may have said…  Ahhh, alas I see your pocket Jacks and raise you a pair of my pocket lady queens!!! Maybe said Tod…  H being all in would see 5 cards turn over, but none of them were to be of any help and out of the game he would go.

The final table would be upon us as Mooch took 10th place.

Foy was first to go out on the final table in 9th place giving Steve 2 points and a top place for the time being courtesy of his 4 game average.

Tod was feeling the pressure and it was beginning to show.  He did to be fair get it in good and the King of clubs the card to cement his continuation in the night’s proceedings.

Next to leave the fold was Rich meaning that Steve was sitting currently on 35 Points, Tod on 34 and Liam on 26.

Tom managed to knock out Steve in 6th place for 3 points and this meant that he would currently be sitting top for the title.  Due to this, Tod needed a 4th place finish to pass Steve, but if Liam took it down tonight then he would be crowned the season’s champion.  What a final this was turning out to be!

Tod was helping his cause no end and managed to take out Adam in 6th place.  One point closer to Steve, but however still behind… for now!  Tod’s A/K no match for Adam’s Ace Queen.

Liam had a great opportunity to give himself and Steve a great boost to lift the title at the expense of Tod.  Liam’s AJcc up against shorter stacked Tod’s K/9  It all appeared to be on for Tod’s exit then that pesky river showed up with a greeting from that King of clubs again throwing Tod a lifeline.  It was back on!

Dan would be next to exit in 5th place courtesy of Amy Coshan with special thanks to yet again that King of Clubs.  This left Coshan in a great spot to the left of Liam.  In order to snatch the title from Tod’s grasp he would need to ensure that Tod went out in 4th and he went on to win it himself.  This effectively now meant it was a 2 horse race between Liam and Tod for the title.

Amy’s turn for the King of clubs below…

Poker players will be poker players and made it very difficult for Liam, effectively stealing the lot from him whilst Pickering tried to manoeuvre Tod’s 4th place demise to give him a shot at the title.

Liam was holding on by the skin of his teeth as the whole table feasted upon his position.  A lovely 5 river card for the set had saved him this time after an Ace on the turn against Tom’s A/J.  Liam was still alive!

Unfortunately in the end it just wasn’t to be.  Liam had a rare opportunity to take out Tod and he took it.  His 3/4 up against Tod’s 9/10 and a prayer.  Liam hit his 3, but Tod had the 10 and it was game over for Liam.  A valiant attempt, but that would mean that Tod was officially crowned the Season’s champion for the 3rd time!  Massively well played Tod and Liam!

Tom would shortly leave us in 3rd place, great performance Tom!  This would leave Amy and Tod to battle it out for Week 6’s boasting rights.

Amy managed to win a crucial hand against Tod, getting there to bag most the chips and before long it was only a matter of time before she dug the sword in.  Coshan’s 6/7 getting the better of Tod’s Q/8 and that would see Amy winning game 6!  Massive congratulations to Coshan and Tod on his title victory.

Amy had this to say on his win:

” An immense game and final table.  Catapulting from nowhere near the seats to 5th from one game shows that every point counts- Plus having Tony “coach” Tod certainly worked to my advantage. Hehe”

Tod had this to say on his 3rd title win:

“I’d like to thank my parents, my agent, but most importantly that most royal of figure, the King of clubs.  He arrived unconventionally, not by road, but by river, and saved my bacon!  Steve and Liam both played brilliantly and on another day would’ve won.  I just got lucky!”

Well over 6 games it may have been a bit more than luck, but hey… gracious in victory as ever. Well played Tod!

Massive congratulations to all players for the season and especially to seat winner’s.  Looking forward to next season to see who will be crowned champion!

Time to ask our resident TV buff what’s on the box.  So without further a do… What’s on wood?

“Celebrity Hunted starts this week on C4!  Hunted is one of my top 5 shows of last few years.  And people should be watching Dr. Who obslol.”