No sooner had week 5 finished, week 6 and the penultimate game was amongst us. This very day would decide the champion and seat winners to conclude the end of BCPC season.

Hitendra and Tony T had put themselves in a great position to snap at the heels of current top of the standings Tom Cawley and as unlikely as it would be predicted at the start of the season, it was all still to play for in the final game.  Could anyone nick pip Tom to the title?  It was his to lose and a few hours would decide it!

Cawley already had one hand on the title after it was confirmed only 19 would take part for the final game and that must have been music to the ears of the current leader. Nevertheless action was underway!

Another quiet start didn’t produce any worthy action until level 2.  Everyone must have been a little cagey with regards to maximising their points total in the final game.    This wouldn’t be the case for both Laura and Chris however, who found themselves gone inside the 2nd level.  They say things like this come in threes and they were correct;  Gaz Howard reporting that Tony T had also gone within the 2nd level.

By current maths, only H could now catch Cawley and would need a top 6 position, but who would it be? 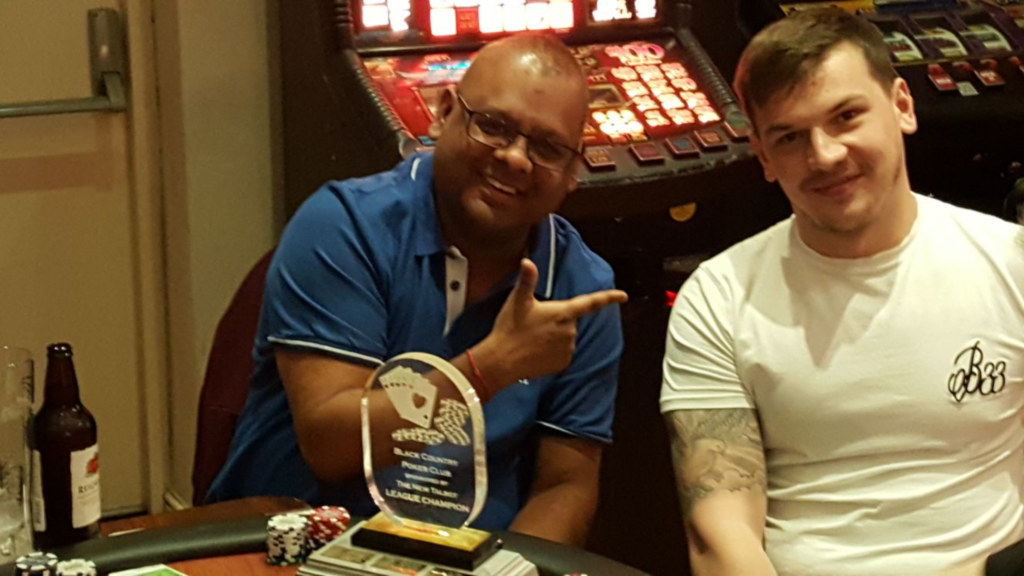 Not a load of action reported this evening so players decided to make use of the evening with a Brian impersonation!  Pick your best and answers on a postcard!

1st up we have Gaz Howard from Wednesbury! 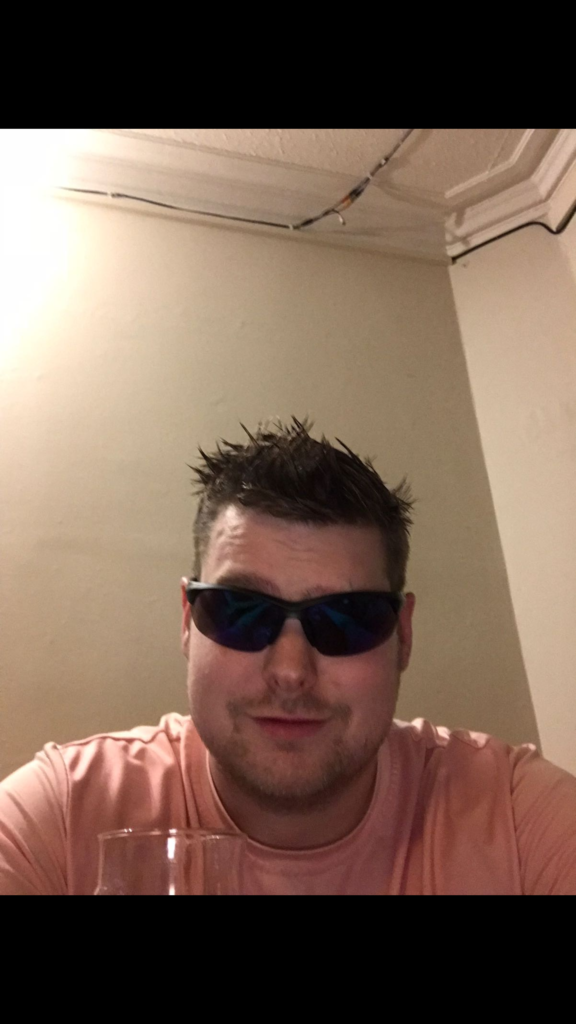 Not wanting to be defeated, Jake Poxon from West Bromwich got it all in with this effort! 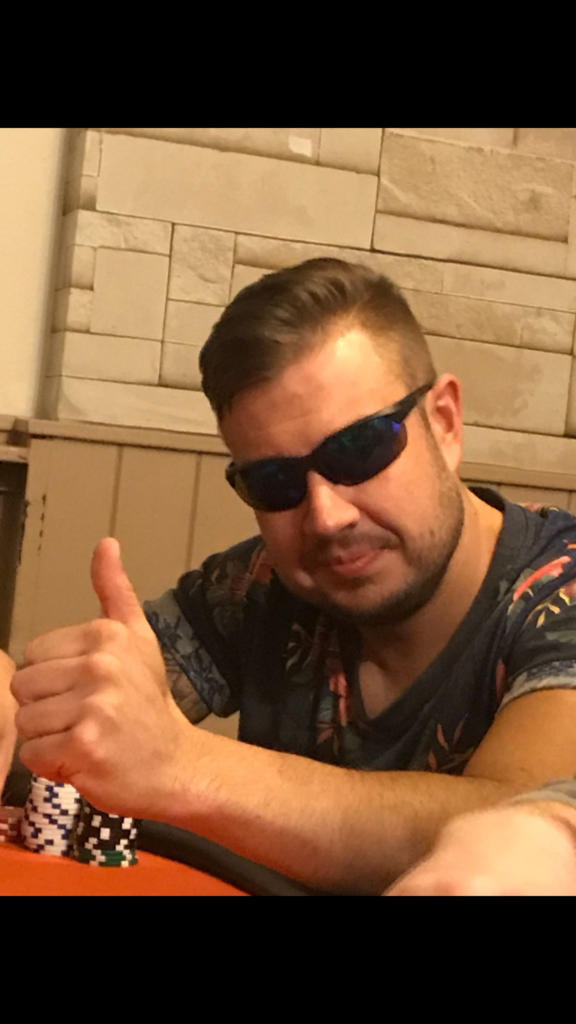 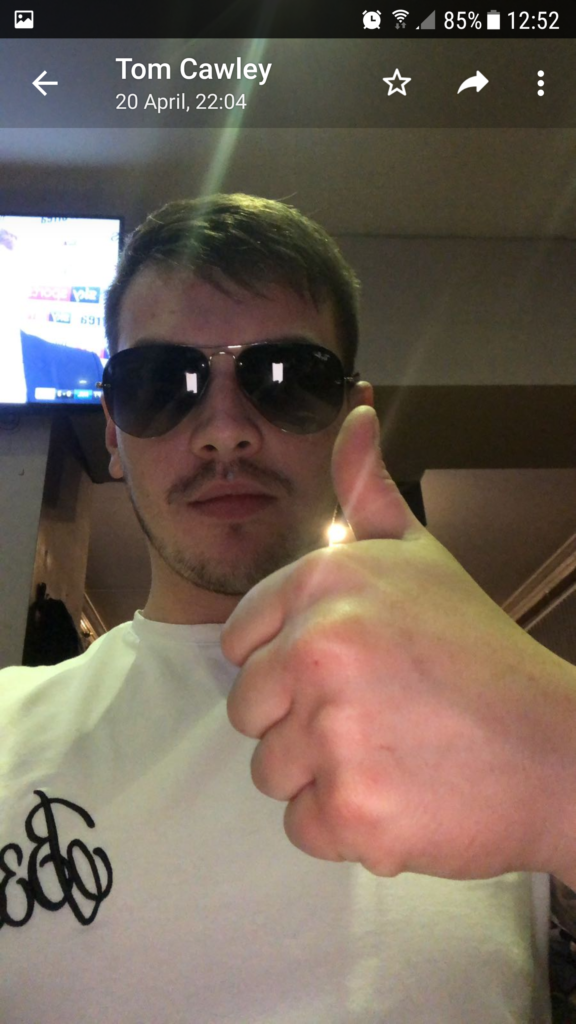 Whilst some Jonny Depp wannabe who I’ve never met put in a poor Brian Yates impression (and didn’t even put his shades on!) 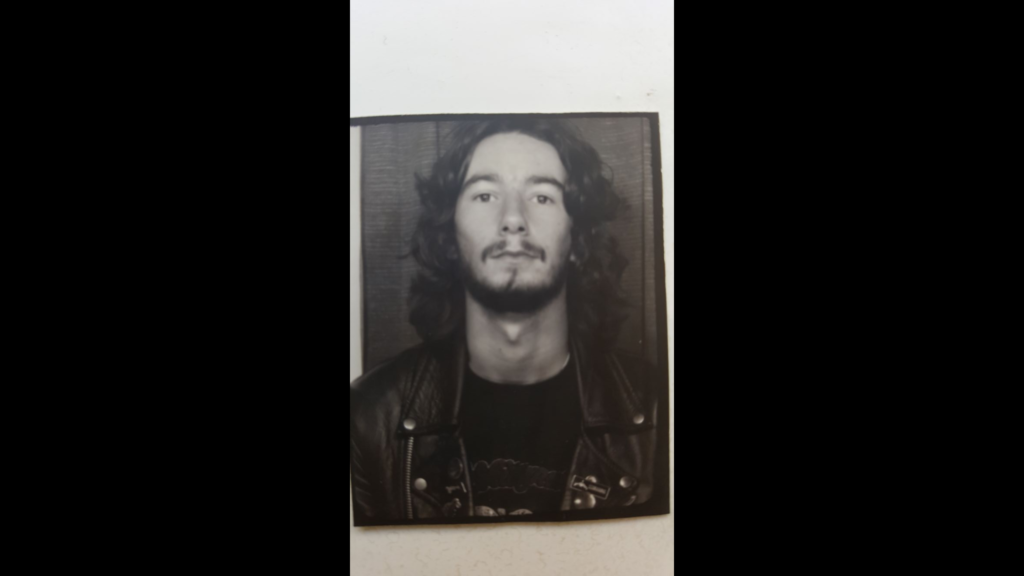 Representing the girls, we had our very own Dudley brainbox entrant; Laura Rhoden! 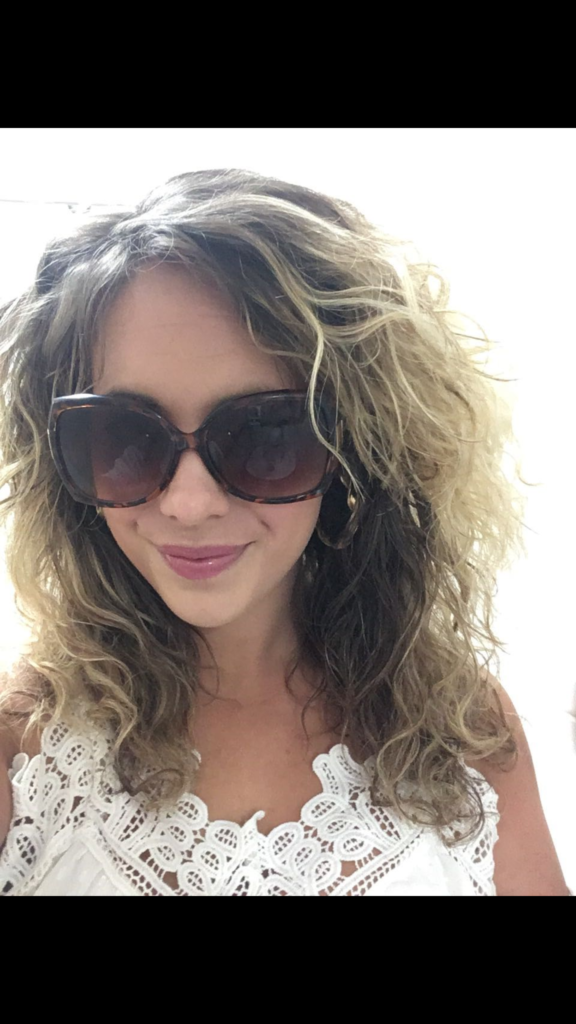 Anyways, back to the poker and Tom Cawley doubles up at just past the 22:00 mark with his pocket Kings making it even harder for H to catch him. 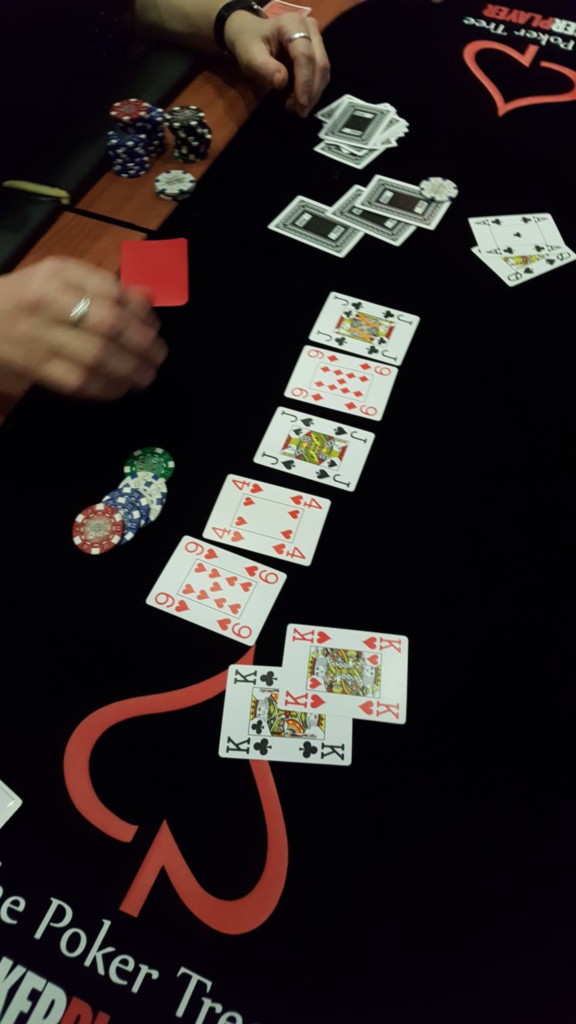 It wasn’t soon after Tom’s double up and the pressure was just too much for H, a valiant effort, but then this happened…

H looked down at AQ and shoves, but unfortunately for him runs in to the AA of Matt and with the Aces holding, Tom Cawley was crowned champion for this season!  Unlucky H, great attempt!

In true celebratory style (and probably wanting to get to the bar) Cawley shoves his chips in following from Liam’s AA raise holding the mighty 7/2.   Just to add further interest in to the mix, Marc Ward re shoves with AQ and Liam obviously calls. 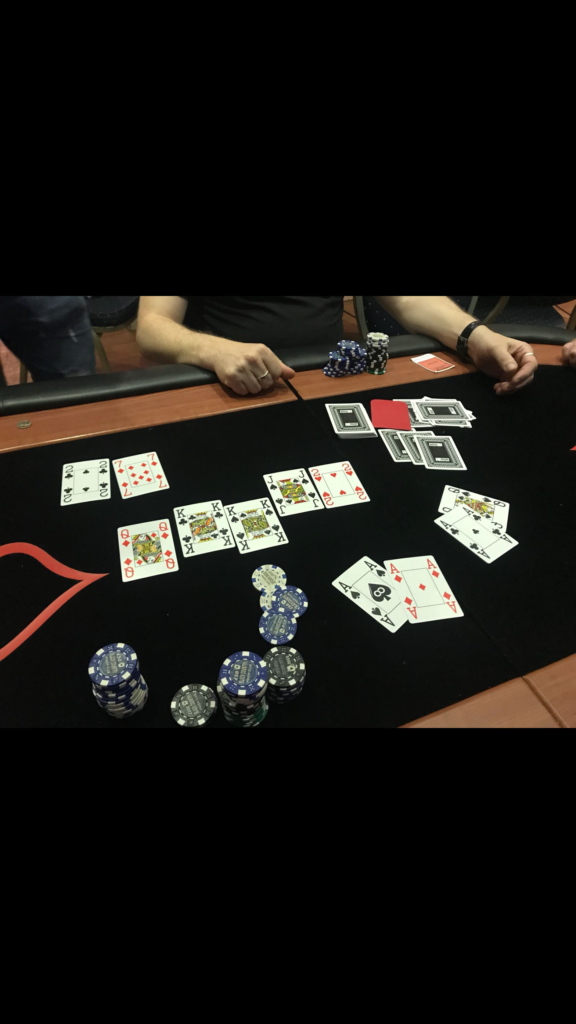 Down to the final 2 and we would find Liam Pickering heads up against Steve Healey, Pickering managing to carry momentum with his earlier chip gains from Cawley and Ward was in fine form.  Sometimes a little bit of luck doesn’t go amiss either and Liam manages to see off his final opponent with a great set of cards, well trip 6’s to be exact and this managed to pip Healey’s top 2 pair to the post granting Liam the week 6 win! 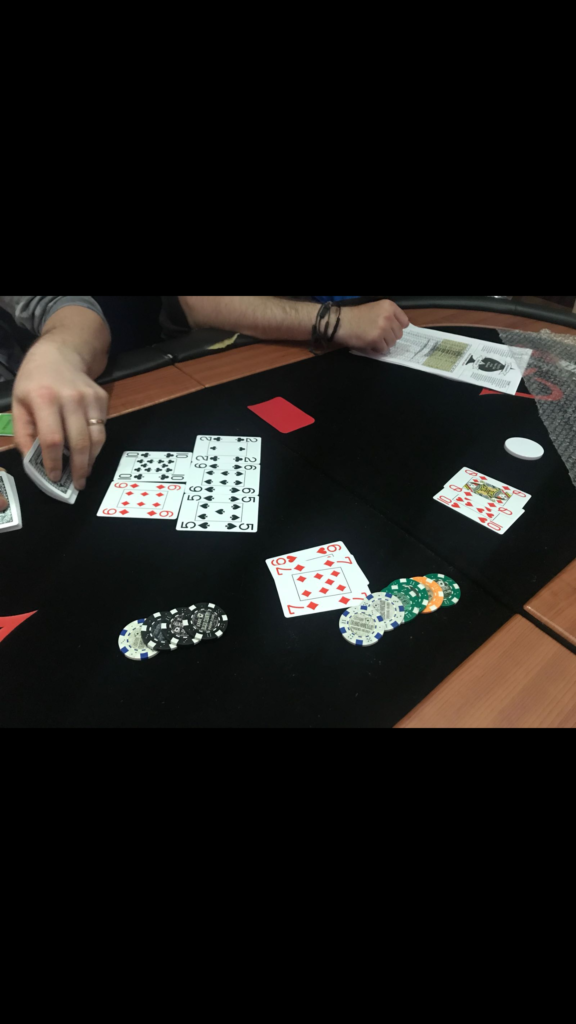 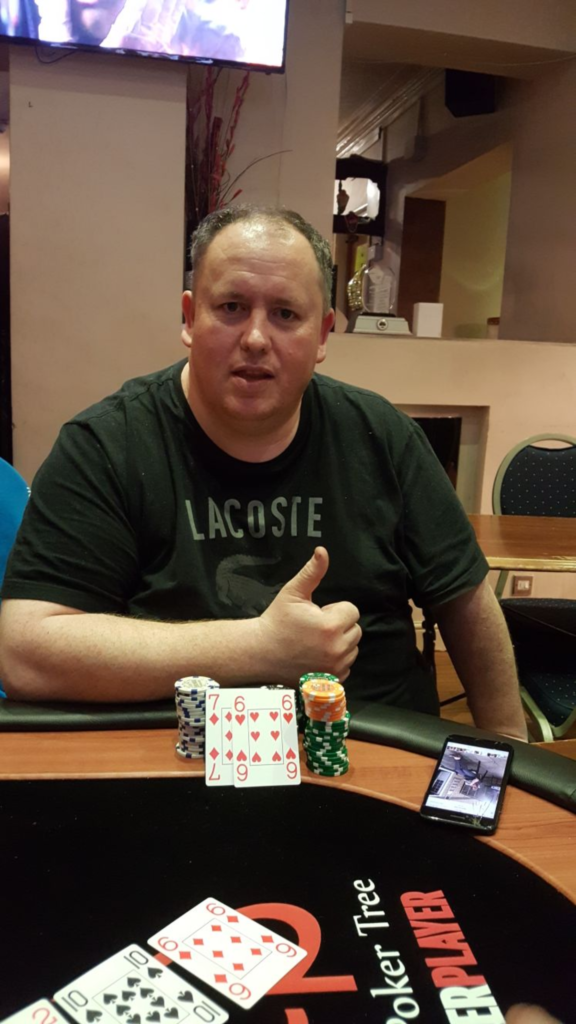 Liam had this to say on his win:

“Away in Spain mate until Tuesday”  LOL

Congratulations on your win and 3rd place overall in the league Liam, no doubt this will spur you on ready for the next season!

And a word from Season 19 Champion Tom Cawley:

“I’m over the moon to get my first league title victory and I hope I can win some money for the club!”

Mahoosive congratulations Cawley, after winning week 1 and 2 it was always going to be a tough feat for anyone to catch you and you were a deserved champion for the season! Now go cash us all some money! 😀 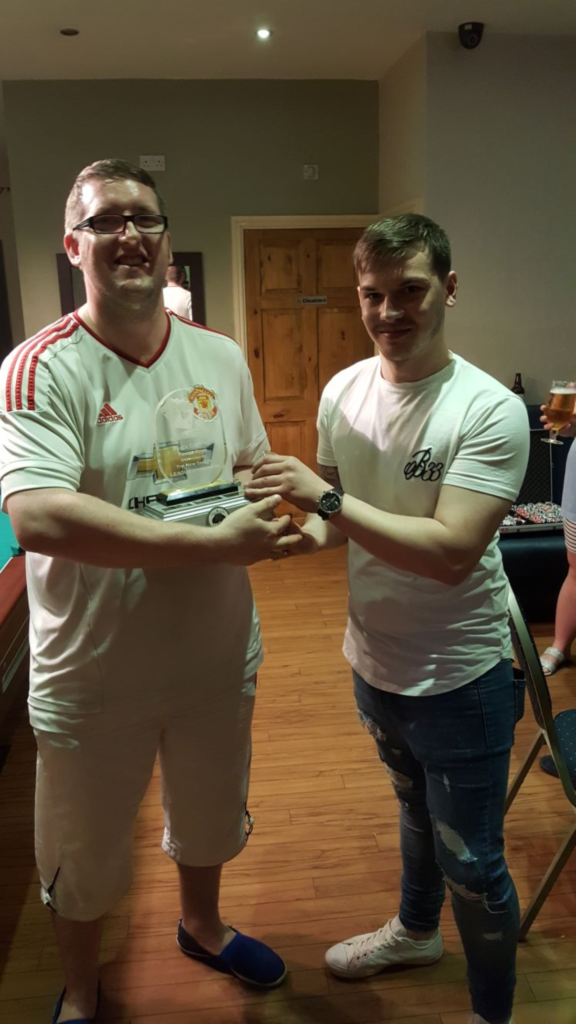 Big congratulations to all seat winners!

WHAT’S ON WOOD?!  The part of the show, blog where we ask local expert Tod Wood for his TV round up recommendations for your viewing pleasure.  So this time round, What’s on Wood?!

“All I have to say is: Taskmaster is back, Plebs is back, Friday Night Dinner is back; I’m happy.”

Remember to check out the calendar of upcoming games and events.  Big thanks Tod for spreadsheet data and Brian for newsletter.  Remember to keep getting your pictures in the Whatsapp group for blog input thanks.  Next game and first one of the new season is Friday 4th May.  Don’t forget your subs as no pay no play and May the 4th be with you!  If you’re new to the club, have a look around the website. If you have any comments, please let me know.