First of all, I am aware of the oxymoronic status of the title. So zip it.

Second, I’m not quite sure what happened, but after only a couple of hours into last night I realised that I was rather drunk. I think I managed to level off (and I don’t think it affected my poker) but my notes are all over the place and are, frankly, somewhat incomprehensible. So everything that follows could all be a load of bollocks. In which case I apologise.

Those of you that have been paying attention will know the evening was the culmination of two online leagues, the Premier League and Division One (shouldn’t we call it the Championship??). Your gods of the arena (just for you, Rob Hewlitt) are:

Starting stacks between around 10k and 15k with 25 minute blinds.

John Harfield was a no-show so the Div1 table effectively only had five players.

So onto the live final tables and this is where it starts to get a bit hazy. Early action on the Prem table saw Redfern looking to bluff Tod with “the Tod”. No, no, no, no, no. I’m afraid that just won’t do. In the same way that two positive electrical charges can’t help but repel each other, so getting one over Tod with “the Tod” will forever be a sci-fi writer’s dream. (Also I had an ace on an AXX-A-X board. Which kind of helped.)

Over on the Div1 table, Courtney got very unlucky with his bullets getting outdrawn by Monsieur Duncan’s cowboys, Andy hitting the two-outer on the turn after which all the money went in. Starting the night as chip leader, Andy was now, well, a bigger chip leader. And Courtney finished in 6th place.

Back on the Prem table, it had been fairly cagey for the first couple of hours but as the blinds hit 200/400/25 people started to play more aggressively. In one hand, Foyie limped for 400. Tod, who had AJs, raised to either 1300 or 1500 (handwriting pretty illegible). (Ooh, just realised that, à la Pokerstars EPT coverage, you can now ‘sweat with Tod’.) Craig flat-called and Redfern shoved for about 7-8k. What do you do!? I tanked and then FLATed. No, not flatted, that would be mental – FLATed. No one can fold like a Bri apart from Bri, but I came close. Craig also tanked for a while but then eventually CLACed (OK yeah I know this is getting silly now). Craig showed AQ and Steve groaned knowing he’d been caught with his hand in the cookie jar playing A5s. I great move and it got me to fold AJ but AQ was just getting too good a price in the end. A queen on the turn sealed Steve’s fate and he exited in 6th.

Occasionally Tod found himself 3-betting Scouse’s raises, which were defended on occasion but holding the goods every time (cough) Tod was able to chip up even more. With JQ he decided to flat call another of Scouse’s raises from the small blind and play the pot out of position. Imo that is not generally a great idea but doing it every now and then is fine. Other opinions are, I am sure, available J. Anyway a Q-high flop and Tod was able to extract even more chips from the vexed Mr Bayliff. “I’m gonna get you soon, Toddy!”

And, not long after, it was time for Scouse to get revenge. Well, nearly. Min+ raising on the button Tod called out of the BB with Q9o. The flop came QXJ. Tod checks, Steve bets, Tod calls. Turn 10. Check-bet-call. River J. Check-bet-call. “You’ve just got really lucky on the river there!” says Scouse. And of course he’s right, as his QT has me crushed until the river gives us the same two-pair. Phew! That was a significant hand as losing it would have caused Tod’s stack to be cut in half.

On the girls’ table, the conspicuous-by-his-absence John Harfield was knocked out, so there were now four actual people left on the table. Tony wasn’t long to follow though. An aggressive game from Andy Kingan had meant he’d accumulated a lot of chips while Tony had found himself low. Rather than get blinded away he manned-up and shipped it in with J9, Andy Kingan calling with pocket eights. A jack on the flop gave Tony hope but the cruel 8 on the turn soon dashed that. Tony finished in 4th place. The bubble had burst.

And we also had our 4th place finisher on the big boys’ table, as the destroyer of the night so far Craig Thompson claimed his third victim in Brian Yates. Brian had recently doubled up with 88 v Scouse’s 67s but not learning Scouse’s lesson he himself chanced his arm with the 67s only to run into Craig’s KK. No help for Bri and we were in the money.

On the Div1 table all players had successfully achieved promotion and so agreed to split the money and call it a night.

So congratulations to the new Premier League gladiators:

Matt and Ash understandably headed off while the rest watched the closing action on the Prem table.

The chips were pretty even for a while but Tod took a few off both opponents with a 3-bet shove with QTs, they both folding the same hand, AJ. Tod also took some chips off Craig by again 3-betting all-in after Craig raised to 5k from his 25k stack, and getting the fold. I might have had J6 there.

However a crucial hand was a Tod raise with (can’t remember, but there was definitely a 5) and a Scouse call with K6. The flop was something like 359. Donk bet by Scouse, I call. Turn Q. Bet-call. River – ? Dunno, maybe a J. Anyway, while debating what I was gonna do, I thought, “If Steve shoves, then I’m calling, because the story he is selling doesn’t make sense.” Anyway Scouse shoved and I insta-folded J. And I was then mocked for claiming I thought about calling (which, good readers, as you know, I did…just not after the shove). A good bluff and in the end I couldn’t make the hero call with 4th pair. And tbh I didn’t need to as I still had 15K. Scouse was chipped up now though, having a roughly 2-1 lead on both Tod and Craig.

Tod then lost a bit more but then doubled up, calling Scouse’s 77 shove with AA. Nice time to wake up with the aces.

Craig then himself doubled up through Tod with his A5 outdrawing Tod’s 77.

But then Tod doubled up again, calling Scouse’s shove, with A3. Steve showed (I think) J7 so 60:40 but the board bricked out.

Stack sizes and blinds now meant it was shove-or-fold time. Even if you yourself had over 20BB, your opponents didn’t so you might as well shove. Anyway Craig did just that on the button and Tod called out of the BB with A6. Craig flipped over JQ and a J (or Q) on the flop saw him take a big lead but the third and fourth clubs on the turn and river saw Tod get lucky and win with the nut flush. A great game from Craig who finished in third position.

Tod now went into the heads up with about a 5-to-2 chip advantage, and shoved at pretty much every available opportunity. Scouse shoved where he could but unfortunately for him he entered the twilight zone of card-deadness and couldn’t call any of Tod’s shoves nor shove himself as much as he usually would.

So very unlucky to Scouse who came back from the short stack to finish runner up. Scouse now has two championship wins and one second place, which isn’t too shabby.

And your man on the scene Tod caught the cards when he needed them to emerge triumphant and claim his first Premier League title. Yay! And aren’t you impressed that despite my boozy fog-brain I was able to remember EXACTLY the final hand of the night?

Oh, and completely unrelated to that, here’s a photo: 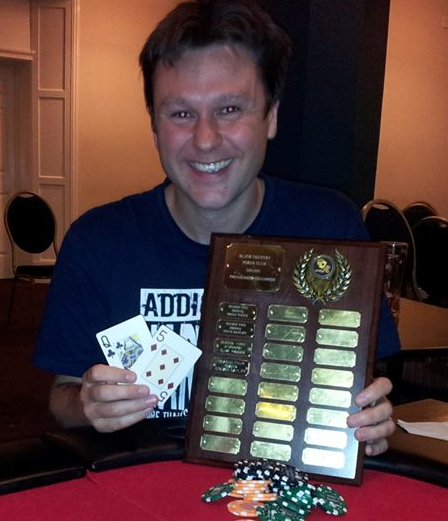 We also snapped Scouse in honour of his two previous wins: 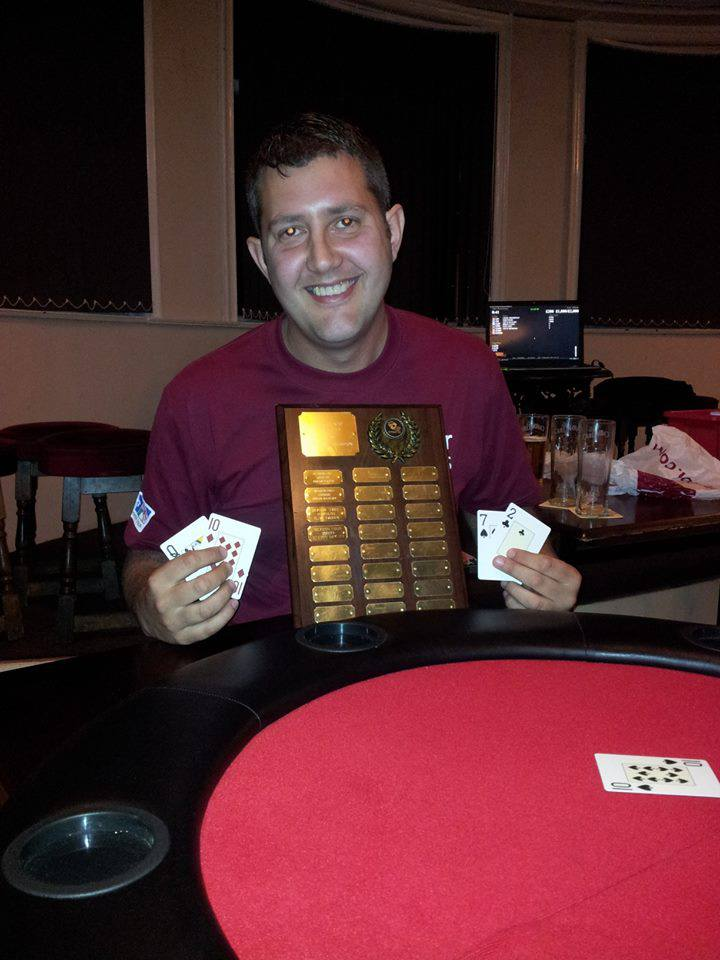 Of course the real heroes of the night were Adam Phelan and Steve Healey for dealing throughout the evening (and also Tony for a while?) and Brian Yates for organising and running these leagues – you are da man.

This is Todimus Reximus Larnders, “The Nighthawk” on BCPC, 98.3 and good night West Bromwich… wherever you are. (Extra points if you know what’s that’s from.)