The BCPC Opens for Business 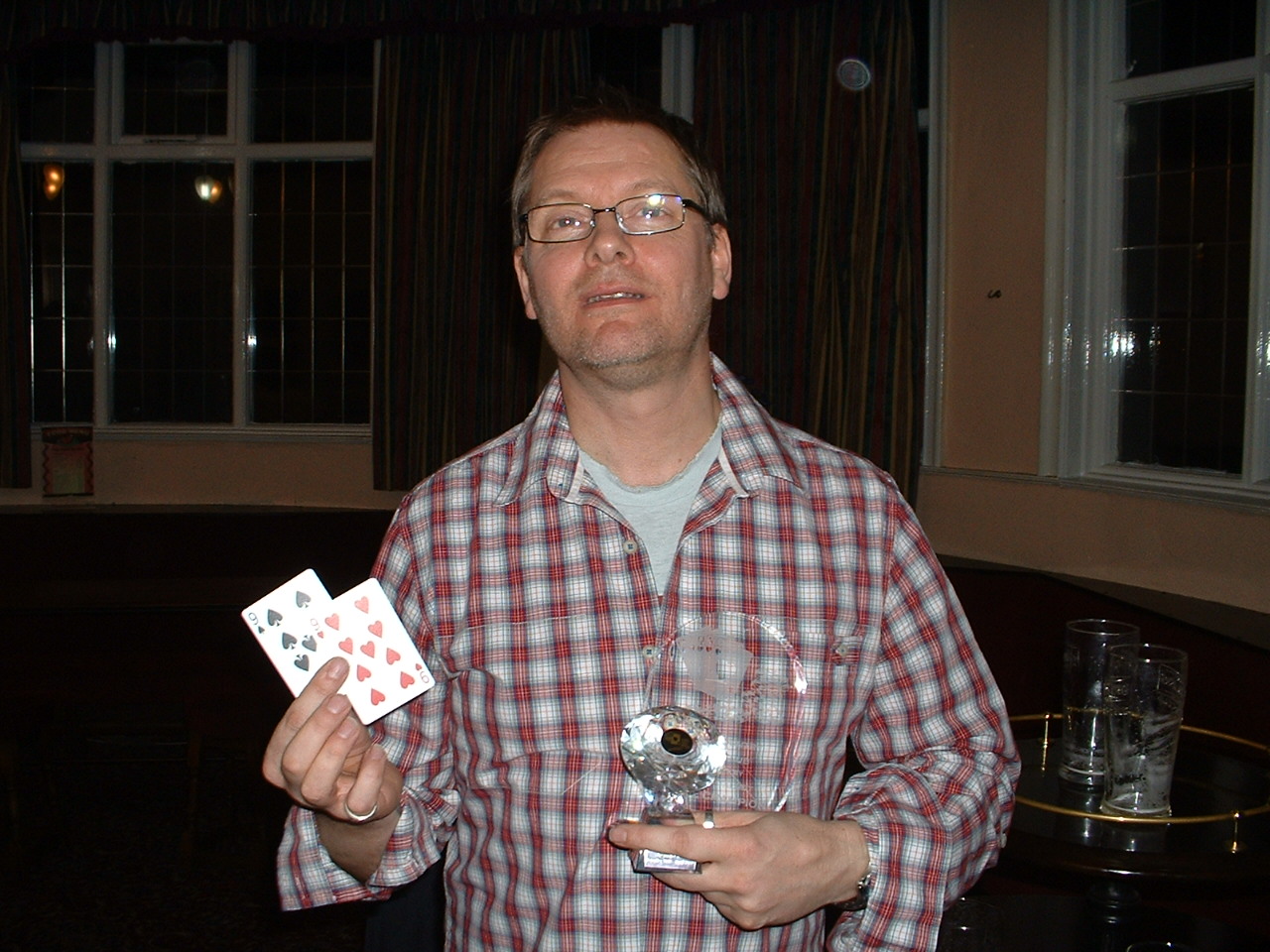 A magnificent opening season for our new club ended tonight (Friday 3rd) in nail-biting fashion.
At the start there were four possible winners, with leader Brian Yates being the favourite as he could win the Title without playing tonight, providing other members didn’t do so well !
APAT UK Champ Steve Redfern was under pressure as he knew that he had to finish 3rd or better to have a chance, while both Chris Baker and Tony Trippier had to WIN tonight and then hope that neither Brian or Steve did well.
The game kicked off with a mis-deal by Tony Trippier !!…..but there then followed a monsterous hand where Matt McKinlay turned 2-pair with

on a board of

only for Ant Williams to have

and somehow, Matt still had 1k of his 5k opening stack left at the end of the hand !

On the first hand of Level 2 we had our first casualty. On an innocuous looking

flop, Darren Hooper bet and was raised by Malcolm Howell in the BB.

The turn brought the

and Malc pushed all-in with

only to get insta-called by Dazza with

and so our Week 5 winner Malcolm was out in 10th place.

Short-stack Matt went soon after when his

was called by Tony with  ac   js  and the board went

and Ant called with  qd   ts

js  flop and Chris was horrified to make trips when the

hit the turn to give Ant the straight and a massive chip stack of over 20k of the 50k in play.

Out in 7th was Maxine McKinlay, who was delighted to get a call when holding  kd   kh  from Daz Hooper holding

It was now getting incredibly tense with favourites Steve and Brian still in but hardly able to play a hand, although Brian did shove all-in to Steve’s button raise, forcing him to fold.

and Tony, needing to WIN the tourney, called from the BB with

The flop brought the  js  but despite there being 3 spades on the board by the turn, Tony’s pair held up to leave Brian with just 300 chips and facing scoring no points !!

This was confirmed 3 hands later when Daz Hooper’s

tc  hit a flop of

:  hard and Brian was out and left praying for help.

Paul Foy had a quite night and exited in 5th spot when his   ad   jc  was dominated by Tony’s   ks   kc  and there then followed a massive call by Tony.
Steve pushed all-in and tried to talk Tony out of a call. Tony put him on K-Q or similar and eventually called, tabling

:  and his hand didn’t improve so his 4th place exit left him with zero points on the night and his chances of being Season One Champ were over.

Tony was now well in with a shout and knew that if he won toinight then the Title would be his. If not, then Brian would be crowned as Champion.

But the flop had Brian woop wooping when it came down

but the  kd  on the turn sent Daz to the rail with his first top 3 finish, leaving Brian gutted.

Now, only Ant Williams could stop Tony taking down Season One and Tony was first to push all-in on a

board, which Ant almost called on but eventually folded to. Ant showed

jh  which prompted Tony to show his   kh

FOR A TOTAL BLUFF !!

Ant decided to call with

was no help and when the  qh  hit the river Tony Trippier became the first ever Black Country Poker Champion.

It was a gripping end to a great 6 months and has been enjoyed by everyone so much. The Final League table is listed below.

Tony wins the BCPC Trophy, sponsored by the New Talbot, a trophy to keep for himself, plus a £550 entry into the GUKPT Summer Series event at Walsall on June 27th where he will represent all the Club members from Season One.