BCPC DEEPSTACK KICKS OFF AT THE CROFT

The move to our new home at The Croft began with the most
successful Deepstack event in Club History. 38 players rocked up, and a
real quality field it was too, and with 16 rebuys, this gave us a record
prizepool of £2700 to play for. 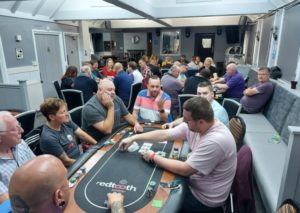 The first 4 levels were “Eventful” to say the least, with a couple of
players not exactly covering themselves in glory!
Eventually though, the 38 players were whittled down to a Final Table
of 9, with only 4 of those being BCPC Members. First to exit was Matt
Kay, followed swiftly by Brian Yates, both players receiving £50. Dave
Mitchell exited in 7th (£100) with Nate Poulton getting £150 for 6th
place. Former APAT England Team Captain Shirley Cole went in 5th
(£250) before recent Online Premier League Champion Dave Halliday
picked up £350 for 4th. The top 3 were then informed that
unfortunately, the game would need to be concluded by 2.30am and
therefore, the final 3 spots would be decided by a chipcount at that
time.

When 2.30am arrived, the final BCPC member standing was Lisa
Whittingham, finishing 3rd for a tidy £500. APAT “Champion Of
Champions” and Irish Open winner David Kingswell was runner-up and
received £700. That left Jo Chillmaid as the last lady standing….or
sitting actually, as she was in plaster from a really nasty fall earlier on
in the week. Jo collected a tidy £850 for her day’s work, plus the
coveted BCPC Deepstack trophy, ending a long, but overall successful
first BCPC association with The Croft 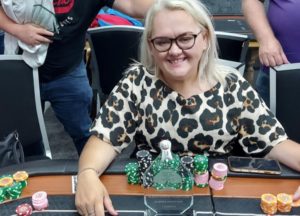